The meat-alternative innovator's shares have risen 400% in just over a month. What could go wrong?

Beyond Meat (BYND 6.50%) has turned into the hottest thing since sliced bread.

Shares of the plant-based meat substitute maker are surging following strong results in its first earnings report as a publicly traded company. In the little more than a month since it debuted, the stock has climbed an incredible 400% from its $25 IPO price, giving the company a market cap of around $7 billion.

It's easy to see why investors are so excited about this alternative protein company. Its revenue more than tripled in the latest quarter, climbing 215% to $40.2 million, and the company's guidance shows it expects that strong growth to continue. Management forecasts top-line growth of at least 140% to more than $210 million in revenue this year.

Still, investors might want to exercise caution with Beyond Meat as the company now has a market value comparable to well-established food industry names like poultry processor Pilgrim's Pride, which is valued at $6.7 billion, but which had nearly $11 billion in revenue last year. Before sinking your teeth into some Beyond Meat shares, investors should ask themselves these three questions.

1. Does it have a competitive advantage?

It's clear that the alternative meat space is hot. Not only is Beyond Meat seeing exponential growth, but chains like Burger King, Carl's Jr., TGI Friday's, and White Castle are jumping on the plant-based burger trend, taking the niche product mainstream.

However, Beyond Meat isn't the only supplier here. Privately held Impossible Foods may be its biggest challenger. Its trademark Impossible Burger is now sold at chains such as Burger King, Applebee's, and Cheesecake Factory.

And not surprisingly, some major players are angling for a piece of the fast-growing market. Through the Sweet Earth brand it acquired in 2017, Nestle is planning to launch a plant-based "Awesome Burger" in the U.S. market this fall,  and Tyson Foods (TSN 0.64%), the country's largest food company, said it would begin selling plant-based meat products this summer.

In other words, Beyond Meat will soon have significant competition in an industry with low barriers to entry.

The company claims that "research, development and innovation" represent critical competitive advantages, and it does have patents and other intellectual property that protect its technology and methods.  But its assertion that it has a meaningful moat is about to be seriously tested by the likes of Tyson, Nestle, and others. At the very least, new competition is likely to bring down prices and narrow margins in the plant-based meat industry, and take market share from Beyond Meat.

2. Is this different than other recent food trends?

The last big trend to transform this industry was the rise of "organic" food -- grown, raised and prepared without pesticides, hormones, or additives that some people believe are bad for human health and the environment.

While that niche has clearly been a growth driver in the food industry, with organic food sales in the U.S. more than doubling in the last 10 years to $45 billion,  the story of organic food companies has been much different.

Whole Foods, once a stock market darling, saw its sales growth steadily slacken in the mid-2010s, and it ended up selling itself to Amazon for $13.7 billion in 2017, about a third less than it was worth at its peak in 2013.

Organic food stocks including United Natural Foods, a distributor of organic and natural foods, and Hain Celestial, which owns organic brands including Garden of Eatin and Rice Dream, and Sprouts have fallen sharply over the last five years as performance hasn't lived up to expectations. 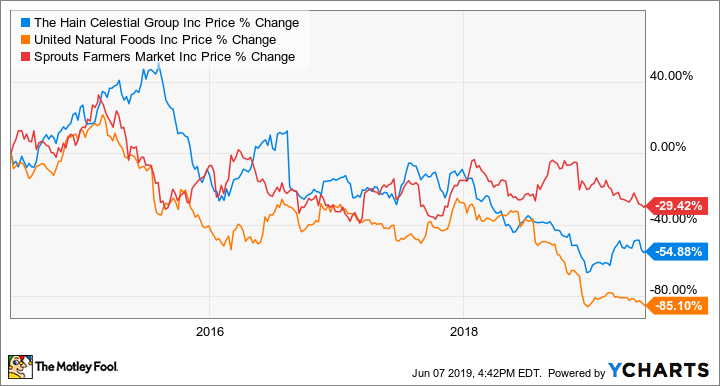 Much like Beyond Meat, those two stocks and Whole Foods surged in the years after the financial crisis when the organic food trend was just beginning to gain traction, but competition, mainstreaming, and maturing growth in the organic sector torched those stocks.

The rise and fall of La Croix owner National Beverage (FIZZ 3.49%) offers another example. Shares surged as La Croix, a flavored seltzer brand, became a millennial staple. Then new competition arrived from small brands like Spindrift, as well as the big beverage companies, draining away La Croix's buzz and its market share. After a sudden rise, La Croix's sales are now falling. Here, again, the story is reflected in the stock chart. 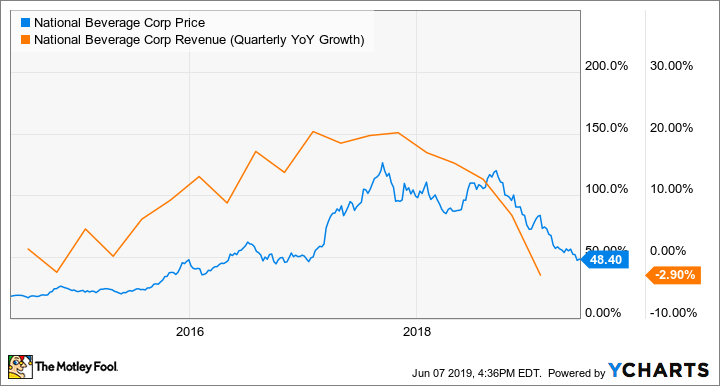 Beyond Meat investors need to ask themselves how alternative meat is different from organic food or flavored seltzer. If the answer is "it isn't," expect the Beyond Meat stock story will have a similar ending.

3. Will everyone be eating plant-based meat in 10 years?

At this point, the bull thesis for Beyond Meat seems to be a bet that plant-based burgers will be almost as popular in 10 years as traditional beef burgers are today. That seems to be the only way to justify the company's valuation, which now sits at a forward price-to-sales ratio of 34 based on this year's revenue guidance, a level normally reserved for high-growth, scalable tech companies, or even experimental biotechs.

Even Tyson Foods, one of the world's biggest suppliers of poultry, beef and pork, is only valued at $30 billion with $40 billion in annual revenue, meaning the upside to Beyond Meat stock at this point seems rather limited compared to how far the stock has come since its IPO. Clearly, the company's own management and the underwriters had more modest expectations just a month ago, given their decision to price the IPO at a valuation of $1.4 billion.

Still, there are reasons to believe that plant-based meat could be a truly transformative thing. Demand for such products is currently outstripping supply, and Beyond Meat and Impossible Foods are having trouble expanding to keep up with orders. Many fast-food chains have avoided selling veggie burgers in the past; Burger King's debut of the Impossible Whopper seems to be a validation of the plant-based burger concept, and suggests the company sees its potential to become a mainstream, popular menu item.

Finally, there's an environmental argument for Beyond Meat and its plant-based peers. Calorie for calorie, raising livestock is a far more environmentally taxing process than growing plants, in terms of space needed and energy consumed, not to mention the impact of the methane emissions from cattle and other animals. Plant-based meat is a much more efficient way to feed the more than 7 billion people in the world, and if it tastes roughly the same as the animal-based version, people may switch en masse to the more environmentally friendly, healthier, and potentially cheaper option.

At this point, it seems the market has already priced such a food revolution into Beyond Meat stock. If it actually occurs, the company could continue to be a big winner. But history -- and the threat of  competition -- should suggest caution here. Investors may want to take a small-bites approach to this plant-based meat company.