Please ensure Javascript is enabled for purposes of website accessibility
Log In Help Join The Motley Fool
Free Article Join Over 1 Million Premium Members And Get More In-Depth Stock Guidance and Research
By Brian Stoffel - Updated May 30, 2018 at 3:39PM

There actually won't be many winners. Here's why.

As a child of the 1980s, I've found the increasing popularity of organic foods astonishing. What was once a hippy-inspired movement has turned into one of the strongest secular trends our economy has seen over the past 30 years.

The combination of an obesity epidemic and a growing awareness of the intersection between agricultural practices and environmental health have created the perfect storm for a new age of grocery shoppers. For a short time, this was an enormous boon to publicly traded companies focused on the movement. Recently, however, the tide has changed, and it increasingly looks like most of the winners will be outside the publicly traded markets.

If you're looking for the short answer as to who will be the big winners in the organic and natural food movements, the answer is simple: smaller, local, organic farmers ... and Amazon (AMZN -2.86%).

Understanding why it will be that way, however, takes some digging. 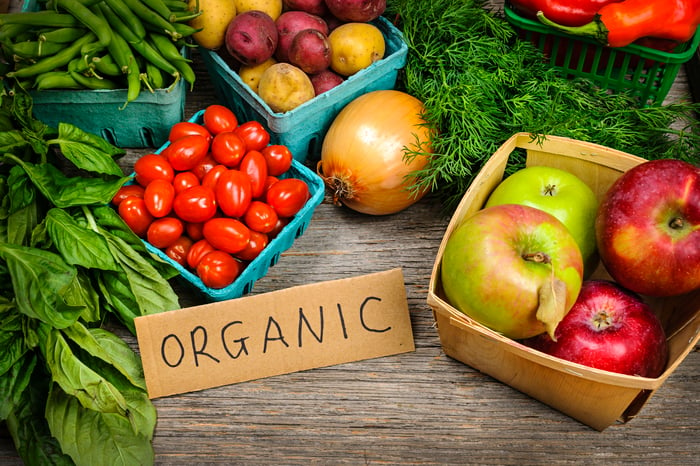 What is organic food?

Before we dive into the booming sub-industry, it's important to define exactly what organic food is. According to the USDA, organic produce is "grown on soil that had no prohibited substances applied for three years prior to harvest. Prohibited substances include most synthetic fertilizers and pesticides."

Organic meats, on the other hand, are defined as "animals are raised in living conditions accommodating their natural behaviors (like the ability to graze on pasture), fed 100% organic feed and forage, and not administered antibiotics or hormones."

Crucially, any plant that is made from a genetically modified organism (GMO) or meat product that was fed GMOs cannot be considered organic. Some people argue that GMOs will help feed the world, while others have argued that they usher in an era of Frankenfoods that pose serious threats to our global ecosystem.

No matter where you might come down on the issue, if investing in major organic players is important to you, the prohibitions against GMOs and pesticides eliminate many popular agricultural plays. According to SourceWatch, this includes BASF, Bayer, Dupont, Dow Chemical, Monsanto, and Syngenta.

How popular is organic food?

Specific numbers can be difficult to come across on a global level, but the Organic Trade Association keeps close tabs on the movement's progress stateside. The numbers demonstrate a powerful and sustained momentum.

Data source: Organic Trade Association. 2012 figures not included as reliable numbers could not be obtained by the author. All figures in millions rounded to nearest million.

That figure at the bottom tells the whole story: For almost two decades, sales of organic foods have grown by an astounding 14% per year. And yet, despite all of that momentum, sales of organic goods still account for just over 5% of all food sales in America. The runway for growth is clearly lengthy.

Who has capitalized on the trend in the past?

There are several parts of the value chain that create natural and organic goods:

When the Great Recession hit, many of these pure-play natural and organic companies (read: not Costco, Walmart, or Kroger) were devastated. Consumers were pinching pennies and unwilling to pay the extra money for organic fruits.

Stock prices fell in turn, but there was a silver lining to it all: The bigger industry players completely abandoned their natural/organic ambitions. When the recovery started to take hold as early as 2010, that meant the companies that hadn't gone bankrupt had the entire natural/organic sandbox to themselves. Sales mushroomed as a result, and investors enjoyed quick profits.

Shares of Whole Foods -- the undisputed leader across all natural/organic categories -- jumped an astounding 1,760% between late 2008 and late 2013. And it wasn't alone. 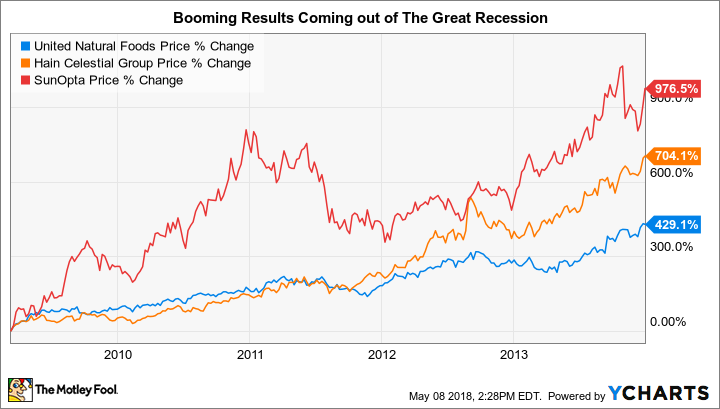 The natural and organic industry produced obscene wealth during these four years for investors who were patient enough to buy and hold shares when the Great Recession took hold.

There's a funny thing about success, though: It breeds competition. Of course, if you have a sustainable competitive advantage -- or moat -- surrounding your business, you're relatively safe.

The success of these smaller players -- Whole Foods, SunOpta, and Hain Celestial -- demonstrated the power of the natural and organic movement. That's when the larger players moved in and started taking back market share. Danone bought natural/organic milk-maker Whitewave for $10 billion, General Mills bought Annie's Homegrown Foods in 2014, and Boulder Brands -- parent to Smart Balance spreads and gluten-free products -- was bought out by Pinnacle Foods shortly thereafter.

Then the major grocers came out with their own organic lines of private-label foods, including Walmart and Kroger, while Costco also upped its natural and organic offerings.

The fallout for the smaller players was devastating. Bellwether Whole Foods lost half of its value before being acquired by Amazon. The other industry players haven't fared well either. 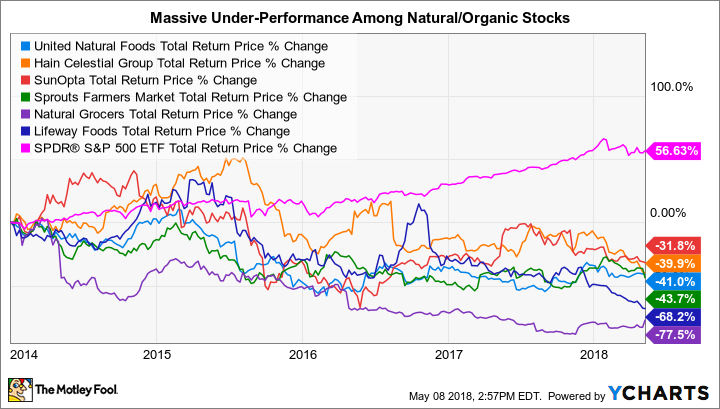 Why I'm not bullish on any natural/organic stocks

Which brings us to today. You might think that with such poor performance from all of these industry players, stocks might be a good buy at today's prices. But I'm not convinced that any of them have anything special that can't easily be replicated by the competition at a lower price point.

Reputation is the only differentiator between one organic brand and another. But I don't think there are any brands that have proven themselves to be investment-worthy in the organic space.

Former hedge fund manager Mike Alkin gave a presentation earlier this year that highlights the situation. He said that for many of today's Millennials -- now the biggest demographic spending group -- want three things from the brands they buy:

Alkin argued that when bigger brands buy out smaller organic names, today's consumers simply rotate into a different brand that represents these desires. Publicly traded companies have -- as part of their corporate philosophies -- a desire to get bigger and less "local" over time. This is patently incompatible with what a lot of consumers are looking for.

That may help explain some of the trouble that Hain Celestial has gotten into lately. The company grew via the acquisition of small brands and attempted to grow them over time. That hasn't turned out well, and shareholders have been left very disappointed.

Of all the organic or natural food companies mentioned so far in this piece, United Natural Foods is the only one with a moat I believe is somewhat defensible. The company's distribution network -- including 33 locations in North America -- is built out, and it has long-term contracts in place with many of its customers.  United Natural is not only a distributor, but it supplies natural and organic foods under some of its own brand names, like Woodstock Farms, Albert's Fresh Produce, and Blue Marble Brands. Basically, through its existing network and the relationships it has built up in the industry, United Natural is how many companies get natural and organic goods on their shelves for customers to buy.

But even there I have doubts. Whole Foods accounts for one-third of United Natural's revenue. The current contract is in place until 2025, but now that Amazon owns Whole Foods, I wouldn't be surprised to see Amazon use its own fulfillment network to distribute goods after the agreement expires.

The only real "organic" stock my money is behind

Now that we're talking about Amazon, I'll explain why I think the company is the best -- and perhaps only -- stock to own that could benefit from the organic movement. Without a doubt, Walmart, Kroger, and Costco have been -- and will continue to be -- huge players within the organic industry. But Amazon has a few advantages up its sleeve that I believe, over the long run, will make its offerings grow faster than the competition.

First and foremost is the popularity of Amazon Prime. We now know the program has over 100 million accounts worldwide. The benefits of membership are quickly being extended to those who shop at Whole Foods. Because Amazon has several other very profitable lines of business -- especially Amazon Web Services -- the company can afford to offer organic goods at razor-thin margins that much of the competition cannot.

And even if the competition can offer organic food for the same price, it would have trouble offering delivery as quickly or cheaply as Amazon can via Whole Foods. The company's worldwide network of fulfillment centers is unmatched, and it would cost the competition a fortune to even try to match half of its scale. And there are currently no companies offering free two-day shipping, access to a boatload of streaming content, and organic food deals -- among a bevy of other benefits -- for $12.99 per month.

Back in 2013, I wrote a piece called The Paradigm Shift in American Food. At the very end, I talked about the growing popularity of Community Supported Agriculture (CSAs) and farmer's markets, and quipped:

Taken to the extreme, this could mean the end of investing in food companies altogether as it would be the independent, local farmer providing the vast majority of food for consumption.

I still believe that's the case, and now I know about Amazon's desire to dominate this industry as well. So when it comes to benefiting, financially, from the organic food movement, I believe there are three ways to play it:

Because this is a commodity that is prized for its small, local origins, I think these are the only three ways to reliable benefit from the movement.