New Gilead Sciences (NASDAQ:GILD) CEO Daniel O'Day sat down for questions at the Jefferies Healthcare Conference on Wednesday. He repeated one word multiple times in his comments. That word was "later."

O'Day wasn't prepared to give many details on what Gilead's strategy will be going forward. He mentioned several times, however, that he would be able to do so later this year. That's understandable considering that O'Day has been at the helm of Gilead for only three months. Any new CEO needs time to gain familiarity with his or her company's business and people before fully deciding what changes are needed.

But even after O'Day is in a position later this year to lay out his strategy for where Gilead is headed, that's just a start. It will take quite a while for that strategy to be executed. All of this raises an important question for investors: Is Gilead Sciences worth the wait? 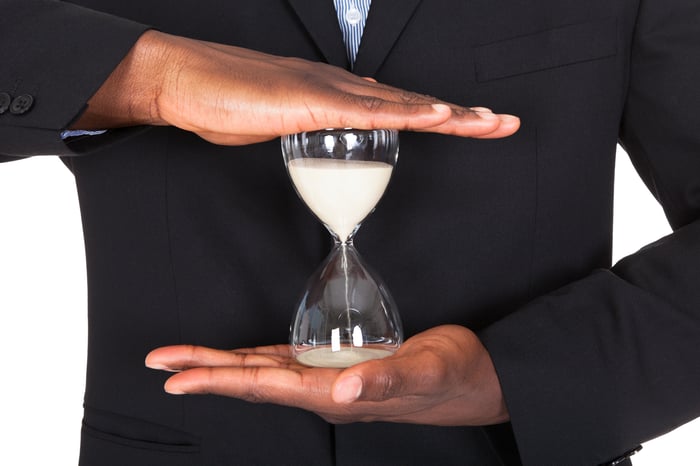 Lots of things to wait on

The obvious place where waiting is required with Gilead is with its pipeline. For example, Gilead has a really promising inflammation drug, filgotinib. Many observers think that filgotinib could eventually become a blockbuster success for Gilead.

But despite three successful phase 3 clinical studies of filgotinib in treating rheumatoid arthritis, Gilead is having to wait for a safety study of the drug in ulcerative colitis to wrap up before it can file for U.S. approval. Sure, the company plans to submit for European approval of filgotinib later this year, but the big opportunity is in the U.S.

Gilead intends to talk with the Food and Drug Administration soon about what O'Day referred to as "the totality of the data" in a pitch for possibly moving more quickly with a U.S. filing. Investors probably shouldn't get their hopes up at this point, though.

There's an even longer wait for Gilead in nonalcoholic steatohepatitis (NASH) after the biotech's lead NASH candidate, selonsertib, flopped in late-stage clinical studies. O'Day mentioned at the Jefferies conference that the company "will have some interesting data" later this year from a clinical study evaluating a combination of selonsertib, cilofexor, and firsocostat in treating NASH. However, it's only a phase 2 study, which means even if the results are great there's still a long way to go.

It's not just the pipeline that investors must wait on. Gilead has the leading cell therapy in the market with Yescarta. But although sales for Yescarta picked up momentum in the first quarter, any expectations that the drug will be a blockbuster won't be realized this year. In addition, it could take some time to find out how much market share GlaxoSmithKline's (NYSE:GSK) recently approved doublet HIV therapy, Dovato, will take away from Gilead's drugs.

The questions posed to O'Day at the Jefferies conference seemed to have a common thread running through them. They basically raised the issue of just how competitive Gilead could be in the future.

Wall Street acknowledges that Gilead has expertise in liver diseases and in HIV. But after the setbacks for selonsertib, there's some angst about whether or not the big biotech will be a leader in NASH. O'Day probably didn't help matters too much by noting that NASH was "a higher risk area" for Gilead's research and development portfolio. He expressed more confidence, though, that Gilead's leadership in HIV would continue.

But there appears to be some skepticism about Gilead's ability to win in the intensively competitive inflammation market. O'Day acknowledged that the company needed to have its "eyes wide open" entering a market with several large drugmakers that already have strong sales teams and large market shares.

It's also probably fair to say that Wall Street isn't yet convinced that Gilead can be a major player in oncology outside of cell therapy. O'Day said that the full oncology strategy was still being developed but stated that Gilead wouldn't try to launch "the fifteenth PD1 first-generation checkpoint inhibitor in the market."

Even if we assume that Gilead will be successful in NASH, immunology, and the broader oncology market beyond cell therapy, it's going to take a while for that success to be achieved. More waiting.

O'Day said of his first three months at Gilead that "one big word comes to mind" -- potential. He believes that the company continues to have tremendous potential. I think that O'Day is right. And with Gilead stock trading at only a little over nine times expected earnings, I'd say that the market is undervaluing the biotech's potential.

I suspect that we'll start to see Gilead use its strong balance sheet to make some acquisitions over the next 12 months. My view is that Gilead will continue to dominate the HIV market and emerge over time as a key player in inflammation, NASH, and oncology. Yes, it will take time. But I still think that Gilead is worth the wait.