Carriers including Delta, United, Spirit, and Ryanair were all falling by double digits in May.

Airline stocks were losing altitude last month as trade tensions caused investors to sour on the macroeconomically sensitive sector, and the effects from Boeing's (BA 2.02%) 737 MAX grounding continued to linger. Among the stocks heading lower, according to data from S&P Global Market Intelligence, were Delta Air Lines (DAL 2.25%), which fell 11.7%, United Continental (UAL 2.18%), which lost 12.6%, Spirit Airlines (SAVE 0.69%), which was off 15.3%, and Ryanair (RYAAY 1.28%), which was down 16%.

As the chart below shows, the stocks mostly fell in tandem with the S&P 500, which ended May down 6.6%. 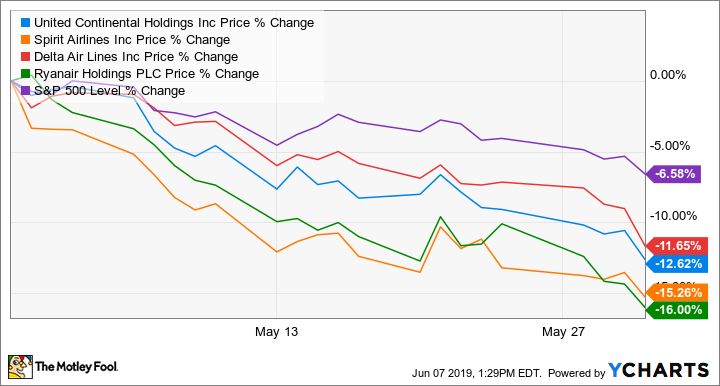 Airlines aren't directly impacted by tariffs the way, say, manufacturers are, since these companies provide a service rather than selling a concrete product. However, travel tends to be highly sensitive to the overall economy, because businesses and vacationers scale back on costly air travel in tough times. And the rising trade tensions between the U.S. and China -- and now Mexico -- have sparked fear that global economic growth could slow down as a result.

A lot changed on the trade front in May. Going into the month, treasury secretary Steven Mnuchin said the U.S. and China were in the "final laps" of an agreement. However, talks broke down, and President Trump said he would raise tariffs from 10% to 25% on the $200 billion worth of Chinese goods that were already being taxed and threatened to impose them on a separate category of $325 billion in Chinese goods. China responded in turn by promising to tariff $60 billion of American imports. Tensions temporarily heightened when the administration blacklisted Huawei, the Chinese smartphone maker, though it revised that policy the next day, delaying its implementation for 90 days.

At the end of the month, Trump expanded the trade war to Mexico, threatening to impose escalating tariffs on that country if it did not do more to stop the flow of migrants into the U.S. Today, the U.S. appears to be at an impasse in negotiations with both China and Mexico.

Delta tried to tamp down some concerns about the trade war, saying that revenues on U.S.-China flights are up 25% this year even though the number of Chinese visitors to the U.S. is now on the decline.

Meanwhile, tariffs on Airbus, the European airplane manufacturer and Boeing rival, could also add costs to airlines, since orders have already been made and the costs of the tariffs would be passed on to airlines like Delta.

Airlines also remained in the dark on the future of the Boeing 737 MAX, which many airlines were looking to as a way to update and expand capacity with a more fuel-efficient plane. United announced another round of cancellations through July, killing a key source of business during the industry's high season. Ryanair went as far as to blame Boeing for its troubles, saying that delays in 737 MAX deliveries will hamper its ability to cut costs.

Fears about the trade war may have been borne out in the May jobs report, as the data surprised the market with just 75,000 jobs being added in the U.S. last month. That figure, below estimates at 175,000, seems to indicate that employers are being cautious in today's economy and reluctant to hire when tariffs could present headwinds to their businesses.

Meanwhile, there's still no word on when the 737 MAX planes could take flight again, meaning that airlines may have to cancel flights through the summer. While the U.S. economy remains strong, stocks, especially in the airline industry, are sensitive to future expectations. If the trade wars continue to heat up and the 737 MAX is further delayed, airline stocks could keep suffering over the coming months.