The recreational vehicle manufacturer significantly expanded its global footprint in the third quarter.

Thor Industries (THO 3.98%) closed its acquisition of European recreational vehicle manufacturer Erwin Hymer Group (EHG) on the first day of its fiscal third quarter. Consequently, Thor shareholders were able to see an entire quarter of combined results when the RV maker reported Q3 earnings on Monday before the markets opened. The company has added a "European RV" reporting segment to accompany its North American towable and motorized RV divisions. Note that in the discussion that follows, all comparative numbers refer to the prior-year quarter. 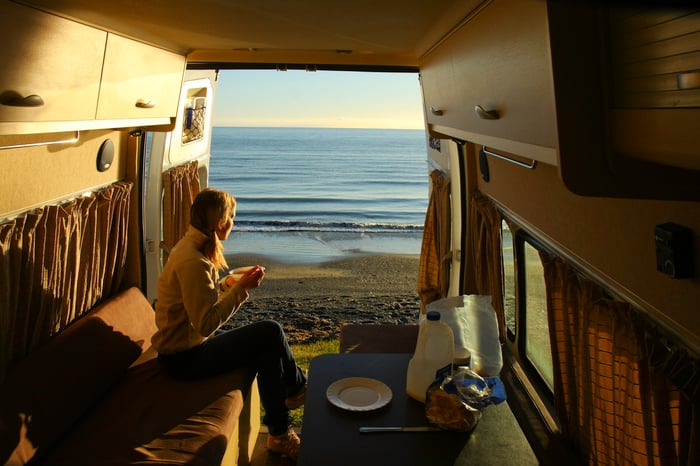 Within the earnings press release, Thor CEO Bob Martin touched on both the EHG deal (which made it the world's largest RV manufacturer) and the still-difficult but improving conditions in North America:

EHG made a significant contribution to our top-line results for the quarter, and as we move through some of the transitional costs, we look forward to EHG's meaningful contribution to our bottom line as well. This transformational acquisition is a critical first step in our long-term strategic plan to expand outside of the North American market. Beyond the acquisition, we have seen improvements in the operating results of our North American segments, reflecting a more stable environment as we finish the fiscal year

As mentioned above, Thor's management believes that North American demand should revive in the 2020 fiscal year. In Europe, dealer inventory levels are elevated in spots, but on the whole, they appear suited for seasonal consumer demand, and, as Martin noted, dealer inventory is "progressing toward more normalized levels."

The company didn't release any goals on acquisition synergies, but management did state an intention to dive in and begin realizing the full value of EHG to bolster cash flow and improve the organization's overall return on investment for shareholders. Shareholders seemed pleased with Thor's European foray: The stock price rose 4.4% in Monday trading following the earnings release.

Why Thor Industries Stock Was Down 13% This Week