After record sales in the previous fiscal year, the RV specialist is adjusting to a new reality.

Global recreational vehicle (RV) manufacturer Thor Industries (THO 3.06%) reported weaker sales in the second quarter of its fiscal 2019 in its financial results released on Wednesday. As we'll see below, the company is in the process of adjusting its inventories to better align with dealer demand. Note that in the discussion that follows, all comparative numbers refer to the prior-year quarter.

What happened with Thor Industries this quarter? 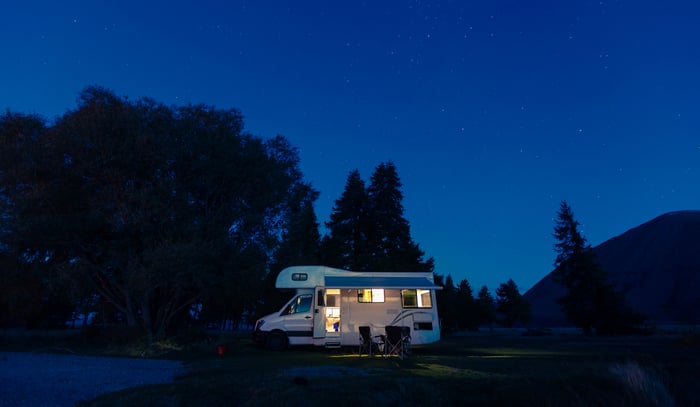 We made considerable progress on a number of fronts in the second quarter, supported by a positive start to the 2019 retail show season, with a number of the larger shows posting strong attendance levels, which supports our view of a stable long-term retail environment. We were also pleased to have closed our acquisition of EHG just after the end of the second quarter. This transformational acquisition represents a major step forward in our long-term strategic growth plan, and our entire team is focused on integrating EHG and providing strong returns for our shareholders. While we are optimistic for the long term, we also expect to face challenging conditions in the near term, as dealers continue to reduce inventory levels and we experience difficult comparisons to the record third-quarter results posted in fiscal 2018.

Thor Industries doesn't provide quantitative guidance, but Martin's comments above indicate that the fiscal third quarter will, like Q2, reveal a drop-off from the record results of the comparable prior-year period.

Thor may be right-sizing its inventory, but the market has already right-sized the stock: It has fallen roughly 50% over the last 12 months. I've recently argued that given Thor's relatively cheap valuation, and its ambitious acquisition of EHG, which has created the largest RV manufacturer in the world, bargain hunters could do worse than acquiring a few of these currently unpopular shares.