The RV specialist is working to balance production capacity with demand.

Recreational vehicle (RV) manufacturer Thor Industries (THO 0.94%) has staged a partial recovery from a 65% share-price loss in 2018, as the company's stock has appreciated roughly 22% year to date. The RV giant's swoon in 2018 was precipitated by industry trends. After the first half of the year, RV dealers found themselves with a glut of inventory on their lots as a several-quarter surge of retail demand began to dissipate.

Dealers have since slowed wholesale orders as they seek to right-size their lot inventories, leading to crimped sales growth for vehicle manufacturers over the last few quarters. How quickly have dealer trends reversed?

Recently, Thor shared that during its fourth quarter of fiscal 2018 (the three months ended July 31, 2018), dealer inventories experienced year-over-year double-digit growth. This was followed by single-digit growth in the period corresponding to Thor's fiscal first quarter of 2019 and a decrease of nearly 11.5% during the company's recently concluded second fiscal quarter.

We can trace the drastic effect of dealer inventory correction on the company's financial statements. In the first half of Thor's fiscal 2019 year (six months ended Jan. 31, 2019), revenue slumped 28%, to $3 billion, causing net income to tumble from $208.2 million in the comparable prior-year period all the way down to a paltry $8.5 million. 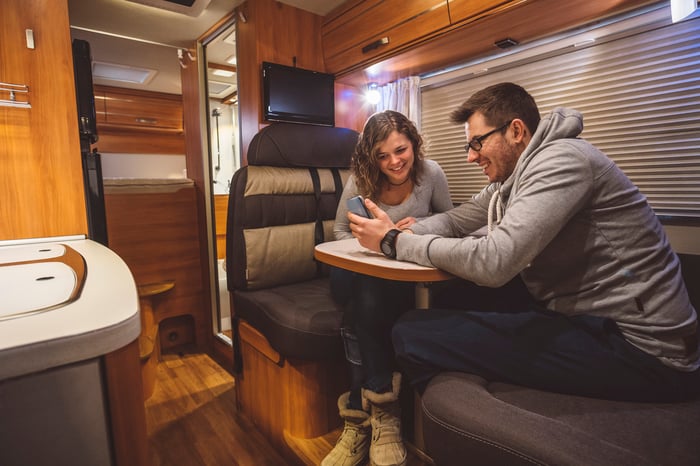 In Thor's last few earnings releases, management has discussed the importance of the company's own "right-sizing" -- specifically, matching production levels to temporarily-reduced dealer demand. This involves managing the amount of finished-goods inventory the company holds at the end of each quarter, as well as the size of its order backlog.

Below, I've updated a chart I created last year to provide a visual impression of the trend of the company's consolidated (i.e. motorized plus towable segments) backlog:

We can see a clear decline since the Q1 2018 peak. But as the dollar volume of unfilled orders slides, how do investors know that the present backlog is right-sized and normalized? In Thor's case, the backorder total, at minimum, should represent a decent funnel of forward production weeks so that new sales can keep ahead of manufacturing speed and capacity.

As the chart shows, when Thor was a smaller company in fiscal 2015 and 2016 (before acquisitions and organic growth added significantly to its top line), annual backlog fluctuated but mostly hovered around the $1 billion mark. During this period, Thor was posting roughly $4 billion in annual sales. Thus, the backlog equaled 25% of annual sales, or about three months of production.

This dynamic changed as the industry experienced two years of heavy demand while Thor acquired competitors like rival Jayco. The Jayco acquisition alone added about $550 million to Thor's backlog in fiscal 2017, bringing the total to above $2 billion. At its peak in the first quarter of 2018, the unfilled-orders tally equaled roughly a half-year's worth of production.

As of this latest quarter, Thor's backlog of $1.45 billion is again equal to about three months of production. This seems an appropriate size and perhaps close to an equilibrium level that balances capacity and demand.

Capacity itself has played a role in reducing back orders, along with the swift dealer-inventory rationalization. Thor has booked capital expenditures of over $250 million over the last two years -- most of it to improve production capacity. This has resulted in faster lead times (i.e. shorter production cycles).

As it weathers this period of dealer-inventory rebalancing, Thor revealed in its latest quarterly report that it's trimming production at some plants to four-day workweeks. This is another signal that the organization is hitting an equilibrium vis-a-vis backlog, while striving to reduce finished goods inventory.

In other words, a leaner inventory balance and slimmer order book should clear the way for Thor to ramp up its output with agility as soon as the demand trend reverses.