Please ensure Javascript is enabled for purposes of website accessibility
Log In Help Join The Motley Fool
Free Article Join Over 1 Million Premium Members And Get More In-Depth Stock Guidance and Research
By Scott Levine - Updated Jun 10, 2019 at 8:25AM

A seemingly poor earnings report and the market's waning appetite for copper contributed to this stock's decline last month.

Reversing course from a 25% climb through the first four months of 2019, shares of Southern Copper (SCCO 1.46%), an industry leader in copper production, dipped 12% last month, according to data from S&P Global Market Intelligence. Besides the late-April announcement of the company's disappointing Q1 earnings, the falling price of copper in May also rocked investors and helped to send shares lower.

While the price of copper had risen through the first three months of 2019, the metal's average price of $2.82 per pound on the London Metal Exchange for Q1 represented a 10.8% decline from the average price of $3.16 for Q1 2018. As a result of the lower price, Southern Copper reported declines on both the top and bottom of the income statement. The company reported net sales of $1.75 billion and net income of $388.2 million in the first quarter, representing year-over-year declines of 4.8% and 17.5%, respectively. 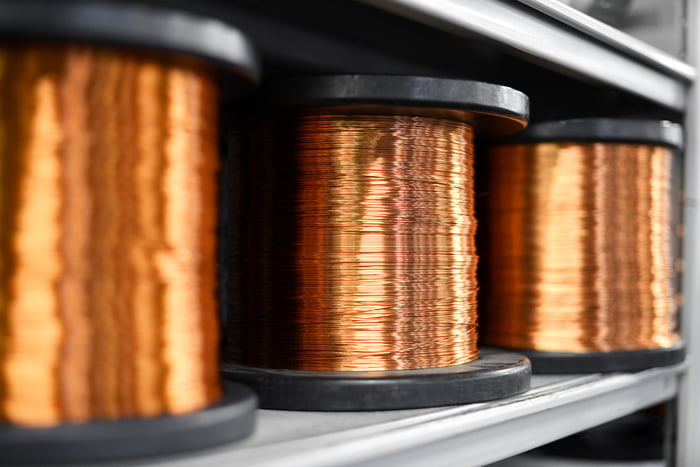 While the decline on the bottom line is undesirable, savvy investors often put more emphasis on a mining company's cash flow -- something that's not as easy for management to massage as earnings figures. In considering this, however, investors found little solace: Southern Copper reported operating cash flow of $371.3 million in Q1, a 43% decrease from the same period last year. According to the company's press release, the compromised cash flow resulted from "higher annual payments of profit sharing to [its] Peruvian workforce as well as taxes in Mexico and Peru."

Besides the Q1 earnings report, the downward movement in the price of copper through May provided another reason for investors to exit their positions. In contrast to the opinion of Southern Copper's CEO, Raul Jacob Ruisanchez, who stated on the Q1 conference call that management expects "a recovery in copper prices in the coming months," the average price of copper on the LME was $2.73 per pound in May -- 6.9% lower than the average price of $2.92 per pound in April.

While the year-over-year decline in the company's financials is certainly not enviable, investors familiar with the materials sector know that dealing with swings in the price of metals is part and parcel of investing in mining stocks. Expanding our view, therefore, we find that Southern Copper's first quarter wasn't as bad as the financials indicate. From an operational perspective, the company, in fact, had a lot to celebrate. Copper production increased 11.6% year over year, while silver production and zinc production rose 4.8% and 4.6%, respectively.

Here's Why Shares of Southern Copper Climbed 12% in December