Shares of transportation logistics company XPO Logistics (NYSE:XPO) dropped 23.5% in May, according to data provided by S&P Global Market Intelligence. That more than wiped out the stock's gains for the year. Currently, shares are down about 5.7% for 2019.

The catalyst for XPO's poor performance in May was a dreadful first-quarter 2019 earnings report on May 1, in which the company reported a 2% year-over-year decline in revenue and a gut-wrenching 27% drop in adjusted net earnings compared to Q1 2018. Some of this was expected, thanks to anticipated currency headwinds and the loss of a major customer (unnamed by the company but almost certainly Amazon.com), but it still caused the stock to take a hit. 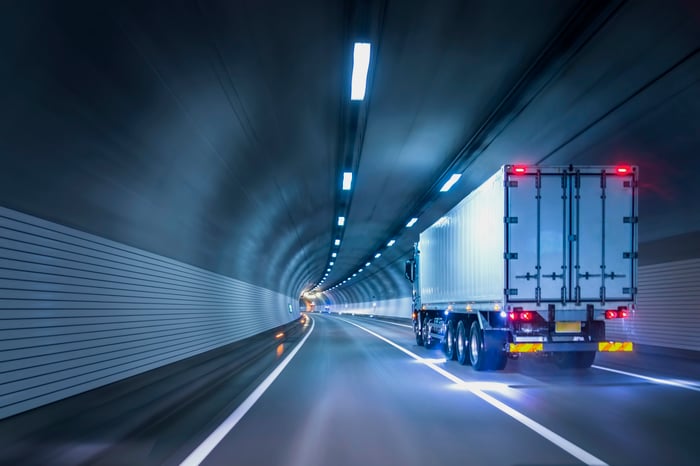 But the share price continued to recede throughout the month, which may be due to a broader shift in XPO's strategy. Over the past several years, XPO has pursued rapid growth through acquisition. CEO Bradley Jacobs -- known as a "roll-up specialist" -- helmed what was a niche trucking specialist with a less-than-$200-million market cap into a $17 billion shipping juggernaut. Between October 2008 and October 2018, the stock appreciated some 2,240%.

But in the few quarters since, things have changed dramatically at XPO. Jacobs made an about-face and said the company won't be pursuing any more major acquisitions. And indeed, the company has started using its cash -- and some debt -- to finance share repurchases instead. This isn't necessarily a bad strategy, but it isn't what existing investors were expecting. Add to that a bunch of high-profile departures from the C-suite -- XPO is looking for a new CFO and has hired a new COO and chief strategy officer within the last year -- and investors may just be saying, "This isn't what I signed on for," and dumping the stock.

The question is whether XPO is still a compelling investment despite the strategic shift and recent underperformance. Well, investors looking for high-growth prospects should probably turn their focus elsewhere. And with the stock still trading at 19.5 times earnings -- even after the May slump -- it's hard to make the case that the stock is a value play, either.

Existing investors, though, should probably consider hanging on to their shares, at least until the new management team has a chance to clarify where the company is headed. XPO may have hit a rough patch right now, but it's been incredibly well managed in the past, and it's probably worth sticking around to see how things play out.