All of the company's key metrics are heading in the right direction.

The company's numbers were great. Revenue was up big, margins are on the rise, and net income is growing very quickly. To top it all off, management raised its revenue and profit guidance range for the full year.

Here are the 10 numbers from the earnings report that showcase the company's strength. 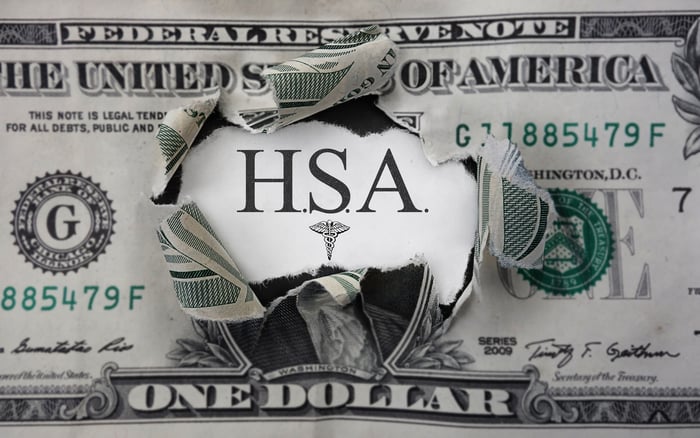 HealthEquity reported total quarterly revenue of $87.1 million, which represents 25% growth year-over-year -- a consistent growth pace from its previous quarter. This number exceeded Wall Street's expectations, which should alleviate any concerns about the slowing of HealthEquity's growth.

On a GAAP basis, net income grew 85% to $41.8 million. While this looks like an extremely impressive number on the surface, this figure includes a $17.9 million gain (net of taxes) related to an April equity investment in WageWorks (WAGE), a company actually co-founded by HealthEquity's current CEO Jon Kessler. GAAP net income per share surged 81% to $0.65. This figure was also boosted by $0.28, net of tax, from the company's equity investment in WageWorks.

HealthEquity's gross margin continues expanding thanks to increasing scale and developing a better mix of business. This figure jumped 300 basis points compared to the same period a year ago.

Adjusted net income per share was $0.41 for the period. This figure grew 32% compared to the same quarter a year ago, and it excludes the paper gains from WageWorks. This is a more accurate representation of the company's true profit growth rate, which nicely exceeded analysts' consensus estimate by $0.07.

HealthEquity added more than 89,000 new HSA members during the quarter. This helped drive the total HSA membership to 4.1 million, which represented a 17% growth rate year-over-year.

Custodial assets -- which is a measure of all of the money held in its members' accounts at the end of the quarter -- grew by $220 million to $8.3 billion. This helped drive total custodial asset growth of 21% year-over-year.

Most HSA members keep the bulk of their assets in cash so they can easily pay for healthcare expenses. However, HealthEquity also allows its customers to invest their assets. At quarter end, HSA members had a total of $1.9 billion of those assets invested in securities other than cash, up 42% compared to the year-ago period. This is great news for investors since HealthEquity earns assets under management fees whenever its customers invest their assets.

This is management's updated revenue guidance range for the full year, representing a $6 million jump from management's prior outlook. The updated midpoint of this range is $342 million, which is comfortably ahead of the $337.5 million in revenue Wall Street was predicting.

Management also boosted its guidance range for non-GAAP net income for the full year. The updated range represents a $3 million jump over its prior numbers which translates into a non-GAAP net income range of $1.28 to $1.34 per share. The midpoint of this range is $1.31, above the $1.28 Wall Street expected.

In April, HealthEquity announced it made an offer to acquire WageWorks for $50.50 per share in cash, for a total price of about $2 billion. Management stated the buyout will "accelerate HealthEquity's growth by creating the premier provider of both HSAs and additional consumer-directed benefits, including flexible spending and health reimbursement arrangements, COBRA and commuter accounts."

HealthEquity's management also pointing out that combining with WageWorks would lead to "a wide distribution footprint, significant customer base, and proprietary technology driving member engagement, smart spending and health saving for life."

All in all, it was a strong quarter on nearly every front. With all of the company's key numbers heading in the right direction and a potentially game-changing acquisition waiting in the wings, investors have every reason to remain excited about where this business is heading.