The automobile manufacturer could tap into the AV market by selling self-driving delivery vehicles.

Fiat Chrysler Automobiles (FCAU) this week announced that it's partnering with Aurora, a self-driving vehicle technology company, to develop autonomous vehicles (AVs). FCA will integrate the Aurora Driver platform, which consists of "hardware, software, and data services" that allow vehicles to operate at Level 4 autonomy (meaning no human intervention is needed).

While Aurora may not have the same name recognition as some other AV tech companies, investors should know that it's led by Chris Urmson, who helped lead Google's self-driving car project before the tech giant spun it off as Waymo.

The companies said in a press release that the tech will be used "for a variety of customized solutions for commercial vehicle customers at a time when changing lifestyles and online shopping patterns are creating logistical opportunities."

In other words, the Aurora and FCA collaboration pairs the automaker's car-building know-how with Aurora's AV tech and will allow FCA to eventually sell autonomous commercial vehicles to companies for package delivery services. 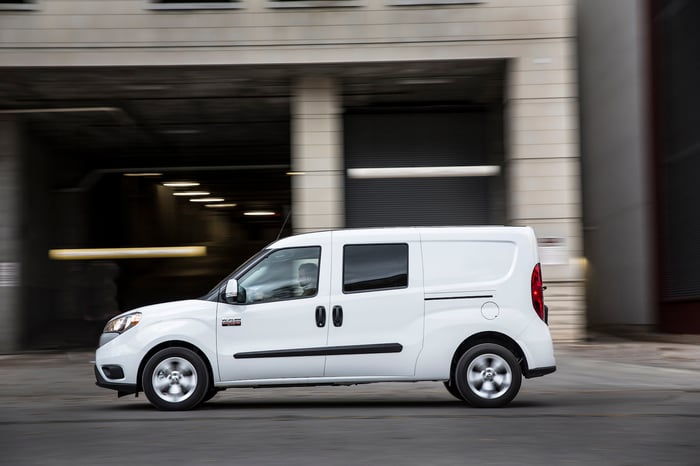 What this means for Fiat Chrysler's AV strategy

Of course, the partnership with Aurora isn't the first of its kind for FCA. The automaker said last year that it would supply up to 62,000 of its Chrysler Pacifica minivans to Waymo for the company's Waymo One self-driving ridesharing service.

But the new partnership with Aurora is different: It will help FCA sell Level 4 autonomous vehicles to third parties (potentially for delivery services), instead of just supplying vans to Waymo that don't have AV tech pre-installed.

FCA and Aurora haven't announced any ridesharing service plans. Interpreting the companies' comments about supplying commercial AV vehicles based on "online shopping patterns" that are "creating logistical opportunities," it appears Fiat Chrysler is more focused on helping fill a growing need for autonomous package delivery vehicles. What's interesting about this idea is that Amazon (NASDAQ: AMZN), which accounts for nearly half of all e-commerce sales in the U.S., has been an early investor in Aurora. The e-commerce giant is looking to AVs as a way to eventually cut down costs and speeds up deliveries. Amazon hasn't said whether or not it will use FCA's vehicles for deliveries, but it's likely that the company will be watching this partnership very closely.

For FCA, the new Aurora partnership is a step in the right direction. E-commerce package deliveries will grow from 50 million per day right now to 100 million per day by 2026. And if Amazon and other companies are looking for faster and cheaper ways to make deliveries, they'll likely need AVs to make it happen.

It's still unclear when FCA's commercial vehicles will have Aurora's technology and when they'll be available for purchase. While autonomous vehicle partnerships and AV testing are already well under way for many companies, it'll still be years before FCA and others see significant benefits to their top or bottom lines.

However, that doesn't mean this new partnership, or other AV partnerships between FCA and other companies, should be taken lightly. IHS Markit predicts that in 2040 there will be more than 33 million autonomous vehicles sold annually. It'll likely take a decade or more for FCA and other automakers to reap the benefits of their AV investments and partnerships, but it's becoming clear that the benefits of self-driving vehicles are just around the corner.

5 Stocks That Billionaires Not Named Buffett Are Buying

The 5 Brands Consumers Love Most

Intel Brings In Another Self-Driving Partner