This live-action portrayal of a classic is a bonus wish for the House of Mouse.

When Aladdin flew into theaters over Memorial Day weekend, there didn't seem to be much hope among investors that Walt Disney's (DIS -2.64%) latest live-action remake could live up to the impossibly high bar typically set by the House of Mouse. As if it wasn't enough to be the first Disney film to hit the big screen since Marvel's Avengers: Endgame began smashing records last month, Aladdin faced a wave of skepticism from prospective viewers in the months leading up to its debut, with early concerns ranging from its underwhelming trailers to questionable casting and cryptic marketing.

Those worries vanished when the curtains rose; Aladdin scored a dominant $116.8 million in gross ticket sales over the course of its first four days, making it the fifth largest Memorial Day weekend debut of all time. As of today, just 19 days in, the film has amassed a whopping $615.5 million in gross box office sales, including roughly $240.5 million here in the U.S. and $375 million overseas.

For perspective, Aladdin's haul already easily eclipses the $504 million globally that the original animated classic brought in -- that is, without adjusting for inflation -- over the course of its entire theatrical run from late 1992 to early 1993. And even stopping now could make a satisfactory total, given its lofty production budget of $183 million. 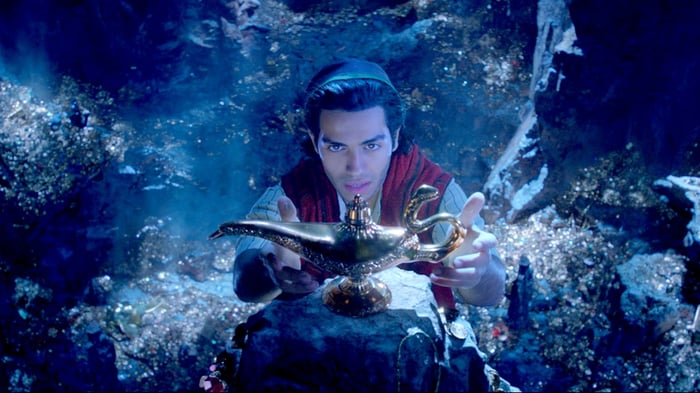 Of course, this might seem underwhelming after watching Avengers: Endgame gather an insane $2.733 billion worldwide over the past seven weeks, including a jaw-dropping $1.224 billion during its opening weekend alone. That makes Endgame the second biggest film of all time, trailing just about $50 million behind 2009's Avatar -- another cinematic franchise Disney now owns, by the way, after closing on its blockbuster acquisition of most the assets of Fox in March.

Unlike Avengers: Endgame, however, which effectively capped the storylines of three previous Avengers movies and stands tall as the 22nd film in the Marvel cinematic universe, Aladdin was never meant to be a tentpole property. Rather, these in-between films are generally expected to serve as complementary endeavors to Disney's grander cinematic ambitions, keeping movie-goers primed for the next installments of blockbuster shoo-ins -- the Avengers, Avatar, Star Wars, Toy Story, and Frozen types of films within its repertoire.

To that end, Aladdin certainly looks impressive compared with the paltry $46 million opening weekend that Disney's reimagining of Dumbo in late March achieved. The film has amassed a modest $350.7 million cumulative total in the 11 weeks since. That's enough for Dumbo to keep the lights on, at least, but I don't expect many accolades from Disney executives on the little elephant's contributions to the bottom line during next quarter's call.

If anything, perhaps Aladdin will serve to whet viewers' appetites for future live-action renderings, including next month's high-potential debut of The Lion King. But even if The Lion King doesn't live up to the comparative hype its own exciting trailers have garnered, I think Aladdin's relative outperformance has provided Disney with everything it could have wished for in the meantime.