The software company is back with a 13-figure market cap, something that hasn't happened for the two other tech giants that planted that flag last summer.

Microsoft (MSFT -2.20%) is a trillion-dollar baby again. The software giant clawed its way back to a market cap of $1 trillion this week, a high-water market it initially reached back in April. It remains the only company commanding a 13-digit market cap, but it wasn't always that way.

Apple (AAPL -2.01%) and Amazon.com (AMZN -1.65%) both spent chunks of time commanding trillion-dollar market caps last summer. Apple struck first; Amazon followed just a few weeks later. It didn't last. Both stocks fell during the market swoon in the final quarter of 2018, and both tech bellwethers have yet to regain their earlier footing in the Trillion Dollar Club.

Microsoft might be able to do what Apple and Amazon failed to do -- staying in the clubhouse on good terms -- but a lot of things will have to go right if the software giant is to hold its ground this time around. 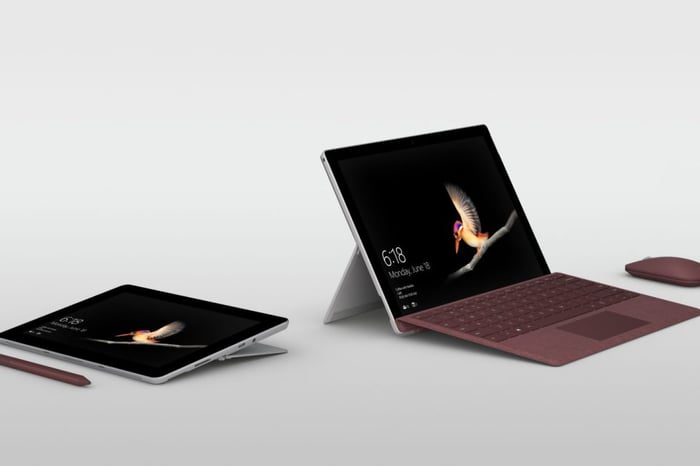 There are plenty of moving parts to Microsoft, Apple, and Amazon, but there is one business that drives each company. The lion's share of Apple's revenue comes from the iPhone, despite its healthy business selling Macs and iPads and general market enthusiasm over its fast-growing services segment. Amazon gets a lot of Wall Street love for its AWS cloud-hosting platform, but it lives and dies by its namesake online marketplace.

Microsoft may seem different at first glance. It breaks up its business into three separate segments, and each of them generates roughly a third of the total revenue. It's almost a dead heat, with the largest of the three businesses accounting for just 35% of the revenue in its latest quarter.

It may have a cult fave with its Surface products, and die-hard gamers know all about the Xbox franchise, but Microsoft is still primarily a software business. And that matters because it's not as susceptible to the economic hiccups and trade disputes that have tripped up Amazon and Apple in recent months. Mr. Softy isn't immune to slowdowns and international tussles, but it's better suited to deliver consistent results than Apple and Amazon are.

Microsoft's revenue rose 14.3% last fiscal year, and the top line is rising 14.7% through the first three quarters of fiscal 2019. Things haven't always been this smooth, but it's certainly in a good groove these days.

The other two are starting to claw their way back to trillion-dollar market caps -- particularly Apple, which has seen its stock rise by at least 1% for five consecutive trading days (something that we haven't seen in nearly 20 years). Apple and Amazon are trading 10% and 8% away, respectively, from joining Microsoft. If the rallies continue, all three stocks may be perched above a cool trillion in market cap at some point this summer, something that we have never seen.

However, when volatility strikes, don't be surprised if Amazon and Apple cave in to market forces. Microsoft will be alone again, naturally.