The social media company has a new market research app called Study that will pay you to collect phone data.

As if Facebook (META -1.19%) didn't have enough data on its users, it's looking for more. The company released a new app on Tuesday, Study from Facebook, which gives smartphone owners the option to sell some of their data to the social network.

But Facebook says it won't be using the data to target advertisements or to sell to third parties; it simply wants to know what people do on their phones besides use Facebook and its family of apps. Facebook's news release says Study will collect the following information:

Facebook's data access on the app will be much more superficial compared to the root access it received from its previous Research app. That app gave it access to collect practically all of the data transmitted to and from a user's phone, including chats, photos, and web history in exchange for $20 monthly in gift cards.

Accessing data outside of Facebook's walled garden can help the company build (or acquire) more engaging features for its users, and that's information Facebook is willing to pay (an as yet undisclosed amount of money) for. 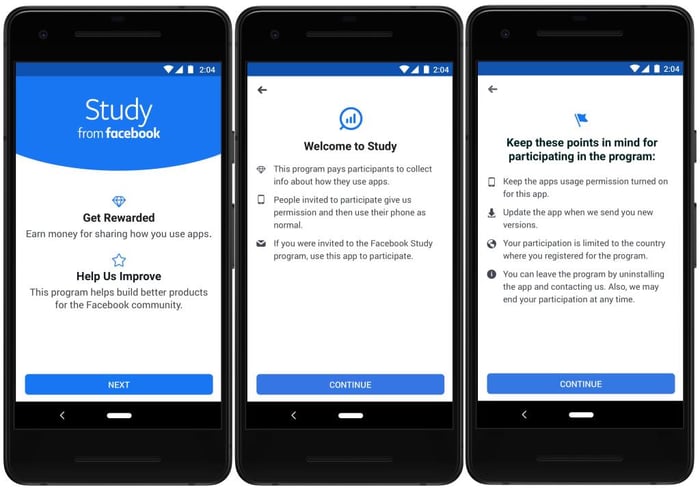 Finding the next Snapchat Stories

Snap (SNAP -3.51%) might have invented the Stories format, but Instagram and Facebook made it global. It took less than six months for Instagram Stories usage to match Snapchat usage, and Facebook hasn't looked back since. It now has over 1.5 billion daily Stories users across its family of apps.

With Study, Facebook is looking for the next Stories. And it hopes to catch the next big thing before it gains significant traction and users flock to another app instead of spending more time in Facebook. The social network managed to successfully co-opt Snapchat Stories, but Snapchat remains a considerable competitor to Facebook for time spent in apps, especially among younger users.

While Facebook could see users were downloading Snapchat or any other app through publicly available data, Study will give Facebook a lot more insight into what apps people are actually using. Some apps might get downloaded a lot, but quickly deleted. Some might go unused most of the time. Some apps might have a feature users love and a bunch of other features they couldn't care less about. Study will give Facebook that information.

Facebook can then use that data to target acquisitions or build its own version of those apps and features that people love.

Facebook currently faces a threat of antitrust regulation as it's made moves to suppress competition through acquisitions like Instagram or copying features like Snapchat Stories. Study is an attempt to further those activities, and it might put more regulatory scrutiny on the company's actions.

Facebook's competitors, such as Snap, can't afford to pay smartphone owners for their data. It's only because of Facebook's dominance in social media that it's able to acquire data outside of its walled garden and use that data to make acquisitions or develop products that further cement its position at the top of the industry. Regulators might deem Study anti-competitive.

Facebook is ruthless, though, and it's willing to use every advantage it has to keep growing the business. That includes its hefty balance sheet, from which it can pay a monthly stipend for "market research," as the company called it in its news release.

Facebook doesn't seem afraid of Washington breaking up the company, and it doesn't see increased regulation as a major penalty, either. Indeed, increased regulation for social media apps could actually benefit Facebook in the long run as it increases the barriers to entry. As such, investors shouldn't expect Facebook to shy away from collecting as much data as possible on users.