The Mac maker will need gaming to hit its ambitious services targets.

Apple ( AAPL -1.17% ) is preparing to launch Apple Arcade, a mobile gaming subscription service that offers subscribers access to a large catalog of high-quality titles. One reason Apple is creating the service is to offer a new monetization model for paid games, which at times have difficulty competing with all of the free games available in the App Store. The Cupertino tech giant has reportedly allocated $500 million toward funding the development of games that will be included in the Apple Arcade library.

Games have long been among the most popular and profitable categories in the App Store. Here's just how lucrative mobile games are. 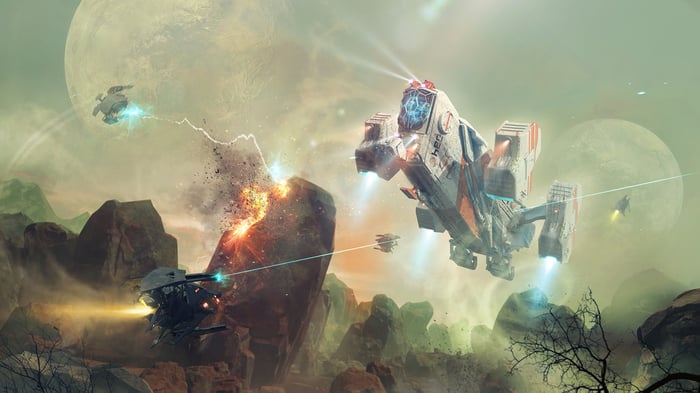 Games are 74% of mobile consumer spending

Mobile analytics firm App Annie released a report titled "The State of Mobile Games in 2019 and Beyond" this week, which happens to coincide with E3, one of the biggest video game conferences of the year. Last year, mobile games represented 33% of app downloads and a whopping 74% of mobile consumer spending. The average person has eight games installed per mobile device and spends roughly 10% of their app time playing games. That last statistic has held fairly steady even though overall time spent on apps has jumped 50% over the past two years, according to the report.

Gaming engagement continues to rise alongside global smartphone adoption (particularly in emerging markets), while a broad spectrum of consumer preferences presents nearly limitless opportunities for different types of games, from casual titles to competitive games. Even though Alphabet ( GOOG -0.87% ) ( GOOGL -0.68% ) subsidiary Google -- which is launching a gaming subscription service called Stadia -- has a much larger mobile installed base with Android, Apple's App Store offers developers much stronger monetization. This isn't a new phenomenon, but App Annie confirms that dichotomy is still very much in effect.

Mobile gaming has become so large in terms of consumer spending that it is now 20% larger than all other gaming formats (PC, console, handheld) combined, and spending continues to grow at staggering rates. A new breed of augmented reality (AR) games also has the potential to fire up the market even more.

App Annie notes that China's freeze on new video game approvals in the Middle Kingdom expectedly chilled the market in the back half of 2018, with consumer spending in the world's largest gaming market dropping precipitously in the final months of the year. "These headwinds have continued into 2019 and disproportionately hurt Chinese game publishers," the researchers note. CEO Tim Cook acknowledged earlier this year that App Store results were "still reflecting the impact of the slowdown in regulatory approval and gaming apps in China."

Apple is on track to hit $50 billion in services revenue and 500 million paid subscriptions in 2020, and mobile games will undoubtedly play a critical role in achieving those goals.