Wall Street had a downbeat start on Wednesday morning, as market participants once again tried to balance their hopes for more favorable interest rate policy against the uncertainties of trade developments. The latest data on inflation seemed to give the Federal Reserve the all-clear to cut rates if it wants to, and the coming G20 meeting at the end of June promises to capture the attention of the whole world. As of 11 a.m. EDT, the Dow Jones Industrial Average (^DJI) was down 8 points to 26,040. The S&P 500 (^GSPC 1.04%) lost 5 points to 2,880, and the Nasdaq Composite (^IXIC) fell 22 points to 7,801.

Even with relatively small moves for the market as a whole, some stocks managed to see more dramatic action. Mattel (MAT 2.49%) saw its shares climb substantially on the potential for a possible acquisition, while Dave & Buster's Entertainment (PLAY 1.73%) gave its investors cause for concern in its latest financial report.

Shares of Mattel were higher by 9% after news surfaced that the toy maker had rejected an acquisition bid from an industry peer. Privately held MGA Entertainment, which makes the Bratz line of dolls, sent a proposal to Mattel's CEO in late May, which Mattel apparently rejected last week. 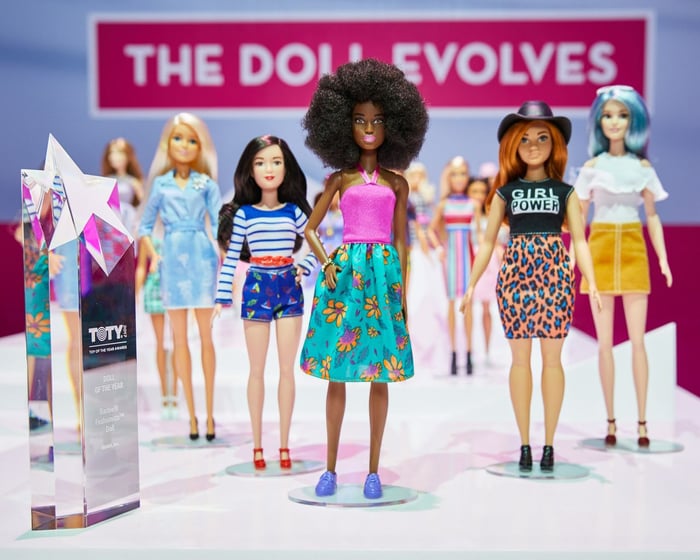 This isn't the first time that MGA and CEO Isaac Larian have sought to buy the toy maker. In April 2018, MGA made a similar unsolicited bid for Mattel that was rejected shortly thereafter.

Yet the two companies also have a highly contentious history. They have sued each other in the past, with allegations largely stemming from the competition between Bratz and Mattel's Barbie doll line. Bratz sales soared during the early 2000s as Barbie sales fell, and signs of the long-standing feud between the two companies remain evident.

From an investing standpoint, shareholders seem to like the idea that anyone's interested in the struggling toy maker. Even after today's gains, the stock remains near its worst levels since the turn of the millennium and down two-thirds from where it traded just three years ago.

Meanwhile, shares of Dave & Buster's Entertainment plunged 21% following the release of its fiscal first-quarter financial report. The entertainment and dining operator said that despite a nearly 10% rise in revenue, net income was almost flat compared to year-ago levels, and comparable-store sales declines of 0.3% weighed on the chain's efforts to grow through expansion.

Dave & Buster's cited a number of factors for the comps weakness. Although the company's special events business saw modest growth, walk-in customers contributed less to its success. Weaker numbers in food and beverage sales more than offset modest gains in amusement-related revenue on a comparable basis.

Despite the news, Dave & Buster's doubled down on its expansion strategy. The company still believes that it can more than double the number of locations it has in the North American market without cannibalizing its existing store base. Efforts to simplify menu offerings, introduce new games, and become more mobile-savvy seem to be gaining traction.

Yet Dave & Buster's outlook for the coming year deteriorated, and it now thinks that its comps are probably going to decline for the full year, with guidance for -1.5% to 0.5% for the metric. Even if the food and entertainment provider can find ways to make its operations as efficient as possible, it'll still need to get customers coming back in the door -- and that could take more time to accomplish than shareholders are willing to give Dave & Buster's right now.

Should You Buy Mattel After Disney Toy Deal?
411%