More specifically on the former, Lululemon's quarterly net revenue climbed 20% year over year (or 22% at constant currencies)  to $782.3 million -- well above the $755 million most analysts were modeling, helped by a 14% increase (16% at constant currencies) in total comparable-store sales. On the bottom line, that translated to net income of $96.6 million, or $0.74 per share, up 35% from $0.55 per share a year earlier, and again comfortably ahead of consensus estimates for $0.71.

But it shouldn't be enough to just read the headline numbers. Rather, investors would do well to take a closer look to see what's driving Lululemon's underlying business. To that end, here are five important points management discussed during Wednesday evening's quarterly earnings conference call.

Check out the latest earnings call transcript for lululemon athletica. 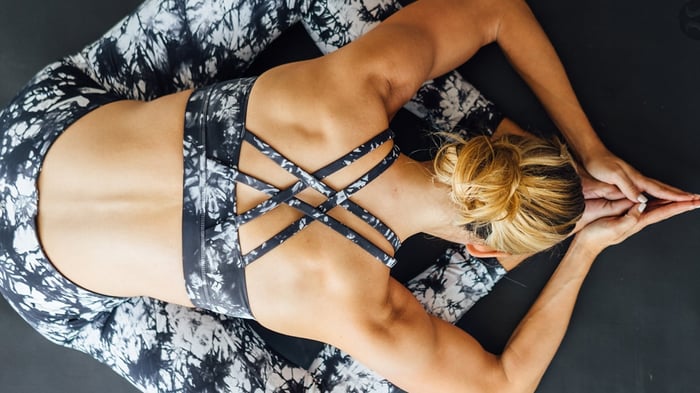 On bucking the industry's broader weakness

While it's been reported there is some recent softening in the apparel space, there is no doubt that 2019 is off to a great start for us. We are building upon the momentum of the past year and instilling confidence in our long-term growth plans. With each new market and innovation, we are inspired by the way in which our guests, both existing and new to the brand, are responding to lululemon.

To be sure, Lululemon's top- and bottom-line results indicate broad-based strength it couldn't otherwise achieve if its message weren't resonating with both new and existing fans of the brand around the world. But it's particularly encouraging that Lululemon is able to achieve this strength in spite of broader weakness in the apparel markets.

On kicking off Lululemon's "Power of Three" growth plan

I'm pleased 2019 is off to such a strong start and we are beginning to live into our five-year vision. I'd now like to speak specifically about the Power of Three growth pillars: Product innovation, omni-guest experience, and market expansion. As you recall [from lululemon's recent Analyst Day], our five-year vision details our path to double our men's business, double our digital business, and quadruple our international business during this time.

To those ends, McDonald noted that guests are "responding well" to innovations such as its new boxers, designed to "address all three elements of the science of feel; touch, temperature and movement," as well as a new Metal Vent Tech collection for men, and expanding the women's technical bra and high support product lines. In an effort to expand its reach, the company is also in the early stages of testing new self-care offerings in a handful of stores and online starting next week.

Meanwhile, on the omni-guest side, Lululemon's physical store comparable sales rose a healthy 8%, while digital comps soared 35%, with both channels benefiting from significant increases in traffic.

Finally, as for market expansion, McDonald said North American growth in both revenue (18%) and traffic remains healthy, and Lululemon remains on track to open 15 to 20 new domestic locations this year. In the meantime, outside of North America...

One standout for international growth

[W]hile we are seeing exciting momentum across all of our international markets, China in particular is on track to post impressive growth this year. In Q1, our team delivered nearly 70% market growth and entered three new cities with strong store openings in Shannxi, Xi'an, and Chongqing, and we remain on track to open 10 to 15 stores in China this year. We also continue to invest in our digital capabilities here with the relaunch of our .cn site in Q1 to complement our presence on Tmall and WeChat. And these investments are paying off, as we saw our China [e-commerce] revenues increased over 100% in Q1.

China is obviously Lululemon's most pronounced overachiever outside of North America. But to be clear, Lululemon is enjoying broad-based growth overseas, with revenue increases of 40% in the overall Asia-Pacific region, "strong starts" from the recently launched Japanese and Korean websites, and over 40% growth across all of Europe.

We've repurchased one million shares during the quarter at a cost of $163.5 million. Coming into 2019, our Board authorized a new $500 million share repurchase plan, of which approximately $337 million of authorization remains. We believe that repurchasing our shares is an efficient and effective way to return excess cash to shareholders and we'll continue to be opportunistic with our repurchase activity.

When Lululemon authorized that $500 million buyback plan at the end of March, it was to replace a previous, substantially completed $600 million authorization that kicked off early last year. But considering its enviable cash generation and earnings power -- and having ended the first quarter with just over $576 million in cash and equivalents on its balance sheet -- the company is more than happy to put its full coffers to work by reducing the size of its float even with shares near all-time highs.

On assumptions for Lululemon's new guidance

For the full year 2019, we now expect revenue to be in the range of $3.73 billion to $3.77 billion. This is based on a comparable sales percentage increase in the low-double digits on a constant dollar basis. We continue to expect to open approximately 40 to 50 company-operated stores in 2019. This includes 25 to 30 stores in our international markets and represents a square footage percentage increase in the mid-teens range. We expect gross margin for the year to expand modestly, primarily driven by continued product margin improvement. We expect SG&A for the full year to leverage modestly. We expect our fiscal year 2019 diluted earnings per share to be in the range of $4.51 to $4.58, [taking] into account approximately $0.04 to $0.05 of additional costs within gross margin related to the tariffs in airfreight [...].

For perspective, this new guidance represents an increase from Lululemon's previous targets, which called for 2019 revenue of $3.70 billion to $3.74 billion and for earnings per diluted share of $4.48 to $4.55. The latter is especially impressive considering it accounts for incremental tariff expenses stemming from escalating trade tensions between the U.S. and China.

In any case, apart the from the fact that Lululemon's shares are now up around 45% year to date as of this writing, today's report offers little fodder for the bears to attempt to pull the stock down. If the company is able to sustain the incredible momentum of its underlying business to achieve its longer-term goals, I suspect investors are poised to enjoy many more fresh highs in the coming years.