The online pet products retailer was a big winner in its market debut.

The stock of Chewy (CHWY -0.05%) was delighting investors in its market debut today. The online pet products seller, whose shares were priced at $22 last night, saw its stock jump 64% to $36 in its first trade, and it climbed as much as 88% to $41.34 during the trading session.

Demand for the fast-growing e-commerce company appeared to be building in the run-up to today's IPO as underwriters hiked the pricing range for the stock from $17 to $19, to $19 to $21 earlier this week, before finally pricing at it $22 a share, giving it a valuation before its first trade of $8.8 billion. However, Chewy only raised $122 million from the offering as the vast majority of the 41.6 million shares that went on sale belonged to PetSmart, the brick-and-mortar retailer that owns a majority of Chewy, after acquiring it in 2017. That would seem to indicate that the purpose of the IPO was primarily to allow PetSmart to cash out.

It will remain the majority shareholder, controlling about 70% of the shares outstanding and 77% of the voting rights. The retailer sold about $800 million worth of its Chewy stock in the offering and now owns 70% of a company worth about $14 billion after today's surge. 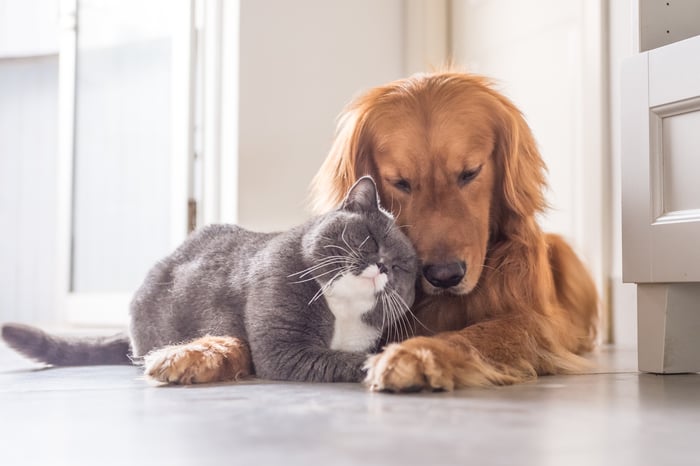 Chewy's surge is the most recent sign that investors remain hungry for new IPOs as the company joins Beyond Meat, Zoom Video, and Pinterest as market debuts that have soared in their opening days this year. This response indicates that the market is keen on the intersection of e-commerce and pet products as both sectors have a number of appealing qualities for investors.

E-commerce stocks, including Amazon.com, Etsy, Wayfair, and MercadoLibre, have been some of the biggest winners on the market in recent years as online retail has enormous growth potential as the channel should continue to take share from brick-and-mortar retailers. Despite Amazon's prowess, American e-commerce companies that have proven their ability to carve out their own niches in online retail, like Etsy, Wayfair, and now Chewy, have been rewarded by investors even if profits have been hard to come by.

Pet products, meanwhile, have proven to be one of the most resilient industries. Pet food and accessories were one of the few categories to see sales rise during the financial crisis as Americans have shown a willingness to spend on their pets even in tough times. The industry has little seasonality, making it easy to plan for and to allocate resources, allowing companies like Chewy to maximize their efficiencies. It has capitalized on this with its subscription plans as two-thirds of its sales now come from its "autoship" customers, who make up a substantial portion of its base of more than 10 million customers.

Furthermore, the pet products industry is expected to outgrow the overall economy, increasing by a compound annual rate of 4.2% through 2022 as more Americans become pet owners and current pet owners spend more on their furry friends. Chewy brought in $3.5 billion in revenue last year and is targeting a $70 billion pet market, giving the company plenty of room for growth.

At a market cap of about $14 billion, Chewy shares look pricey following today's surge. The company is now worth more than Etsy, at $8 billion, and about the same as Wayfair, which is worth around $14 billion but has double the revenue of Chewy. Petmed Express, the only other pure-play pet stock on the market, is valued at just $350 million.

Chewy is not profitable, and acknowledged in its prospectus that it may never achieve profitability. Its revenue is growing fast, up 45% in its most recent quarter, but that clip also decelerated significantly from the 67% rate it saw in 2018.

Whether Chewy succeeds over the long term remains to be seen, but for today at least, the company wins best in show in the minds of investors.

Love Shopify? Here Are 3 Other E-Commerce Stocks to Buy Now

Chewy Stock Could Be on a Bull Run After a Blockbuster Quarter -- Should You Buy Now?