It has been years since the supermarket chain has outperformed its main retailing rivals.

Until about two years ago, Kroger (KR -1.22%) stock was on what looked like an unstoppable roll. The supermarket chain had etched away at Walmart's (WMT -1.33%) market share for an entire decade, resulting in robust shareholder returns through late 2015.

Since then, Kroger has dramatically underperformed national retailing peers like Walmart and Target. All three companies are aggressively tilting their businesses toward multichannel retailing, but Kroger's sales growth has been disappointing, while its rivals have posted record high customer traffic gains.

On Thursday, the grocery chain has a chance to start changing that bleak story by announcing first-quarter results that put it closer to the industry leadership position it used to hold. 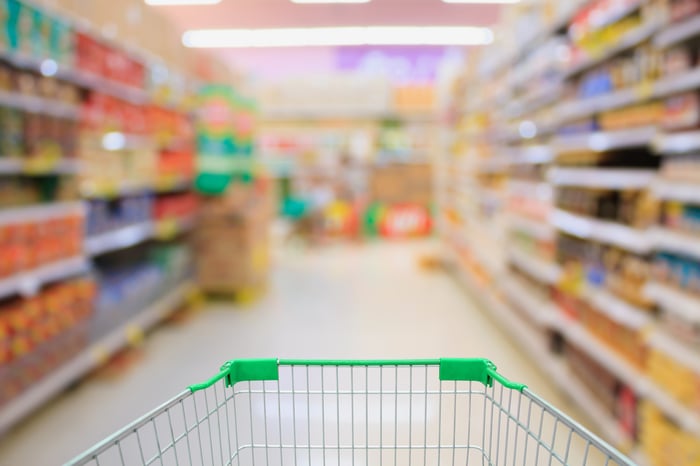 Kroger has been boosting sales at a 2% pace in recent quarters. While that's better than the declines investors witnessed a year ago, it's still far from a healthy sales volume in today's industry. Walmart just logged its fourth consecutive quarter of over 3% growth, after all, and Target's gains accelerated to over 4% in the fiscal first quarter.

Both companies told investors last month that their latest sales figures translate into market-share gains, and on Thursday, we'll find out how much of the growth came at Kroger's expense.

The supermarket chain said back in early March that it was transforming into a growth company thanks to successful initiatives like surging digital sales and robust demand for in-store brands like Simple Truth. But the real test of these strategies will be if they start delivering revenue gains of between 3% to 5% rather than the 1% to 2% uptick Kroger has been notching over the past year.

Like its peers, Kroger has been pouring cash into the online sales channel while keeping prices as low as possible in its stores. These initiatives are harming its short-term earnings outlook, just as they have for both Walmart and Target. The difference is that investors haven't yet seen a solid return on Kroger's capital spending.

That will need to change over the next few quarters for the retailer to break from its disappointing business narrative. CEO Rodney McMullen and his team called 2018 an investment year, and they're planning to boost capital spending to $3.2 billion this year from $3 billion. But unless executives can point to real benefits from this cash outlay, like rising sales volumes or improved customer satisfaction, investors won't have much patience for continued aggressive spending plans.

Kroger's big peers each issued positive comments about the rest of the year when they posted their earnings results in recent weeks. Target predicted robust growth across its product categories and sales channels, while Costco said recent profitability wins should support faster growth.

Kroger's outlook this week will be judged against those bright predictions. As of late March, management's forecast called for sales gains to plug along at about 2%, while operating margin inches lower for a second straight year. Kroger has consistently predicted that the business will start producing better financial returns beginning in fiscal 2020. However, if it merely affirms that conservative outlook on Thursday, investors might be right to conclude that the chain is still losing significant ground to rivals across the retailing industry.