Please ensure Javascript is enabled for purposes of website accessibility
Log In Help Join The Motley Fool
Free Article Join Over 1 Million Premium Members And Get More In-Depth Stock Guidance and Research
By Rich Smith - Jun 16, 2019 at 7:13AM

NASA assembles its Lunar Avengers -- and asks them to build it not one, but a whole fleet of new spacecraft.

For all of the money we are spending, NASA should NOT be talking about going to the Moon-We did that 50 years ago. They should be focused on the much bigger things we are doing, including Mars (of which the Moon is a part), Defense and Science!

President Trump's lunar vacillations notwithstanding, NASA does intend to return to the moon -- by 2028, or even earlier. And as we learned last month, America's space agency has picked an all-star team of space companies to help put American boots on the lunar ground. 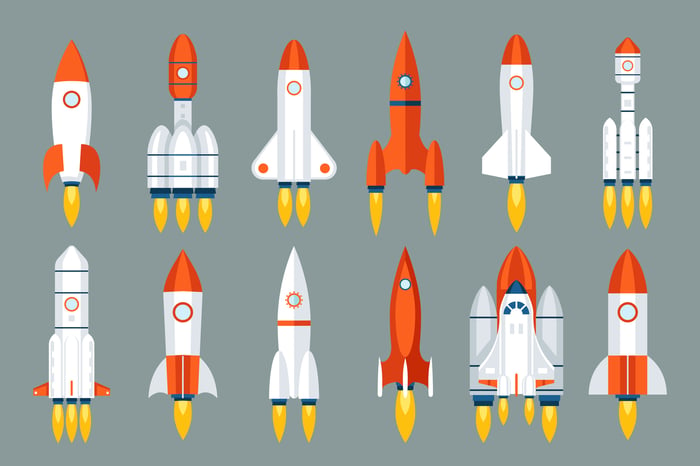 In NASA's press release, the agency named 11 companies that will split a total of $45.5 million worth of contracts "to conduct studies and produce prototypes of human landers for its Artemis lunar exploration program." Over the next six months, each will be asked to "study and/or develop prototypes" that could be used to form the "descent, transfer, and refueling elements" of a potential manned lunar lander.

Taking these categories one at a time...

The transfer element -- a spacecraft used to descend from a planned high-orbiting "Lunar Gateway" space station to a lower orbit from which astronauts will depart to land on the moon -- will be studied by Aerojet Rocketdyne (AJRD -0.10%), Blue Origin, Boeing, Lockheed, and Sierra Nevada.

The refueling element -- a tanker spacecraft to gas up various other vehicles so they can be reused -- will be studied by Boeing, Lockheed, Northrop, Sierra Nevada, and SSL -- a unit of Maxar Technologies (MAXR -3.40%), which recently also won a NASA contract to build the "power and propulsion element spacecraft" for the Lunar Gateway itself.

There and back again (?)

Now, unless our astronauts intend to reside permanently on the moon after their descent, NASA is obviously also going to need to design and build an "ascent" element to return astronauts back to the Lunar Gateway and thence to Earth. Rest assured that such a vehicle is in the works -- it's just that, as of this latest press release, no contracts have been awarded to build an ascent element (or even to study it).

Leaving aside that quibble, the $45.5 million that NASA has allocated to design and build three entirely different spacecraft is probably not sufficient to the task. But NASA explains its apparent stinginess: "To expedite the work, NASA is invoking undefinitized contract actions, which allow the agency to authorize partners to start a portion of the work, while negotiations toward contract award continue in parallel."

In other words, the $45.5 million worth of contracts described in NASA's May press release is only a very small down payment on the total that will eventually be disbursed to return America to the moon. Building 25 working prototype spacecraft, to say nothing of the operational versions of the descent, ascent, refueling, and transfer elements, will cost billions and billions more. And it's probably safe to assume that at least some of these billions will eventually land in the coffers of the five publicly traded companies included on NASA's list of 11 contract winners.

The next step in this process -- the next step toward these companies' claiming their billions -- will come later this summer when NASA lays out its specific requirements for building these spacecraft, and issues a "formal solicitation" for bids to build them.

Have no doubt that we're keeping a keen eye out for this solicitation, and will update you as soon as we know more.