The European aircraft manufacturer announced deals for more than 100 aircraft on Monday -- and the launch of the A321XLR model should lead to more deals over the next few days.

Through the first five months of 2019, order backlogs shrank at both Boeing ( BA -1.92% ) and Airbus ( EADSY -2.31% ), with cancellations outnumbering new firm orders. Yet this week's Paris Air Show -- which functions as the biggest sales event of the year -- presents a great opportunity to turn things around.

Unfortunately for Boeing, the ongoing grounding of the 737 MAX will make it hard for the U.S. aerospace giant to ring up sales of its most important aircraft family. By contrast, Airbus is well positioned to dominate the order activity at the Paris Air Show -- and it got off to a nice start on Monday.

As expected, Airbus officially launched the latest variant of its popular A321neo jet on Monday: the A321XLR. Thanks to redesigned fuel tanks and an increased maximum take-off weight, the A321XLR has 4,700 nautical miles of range, according to Airbus. That's up from 4,000 nautical miles for the existing A321LR model. 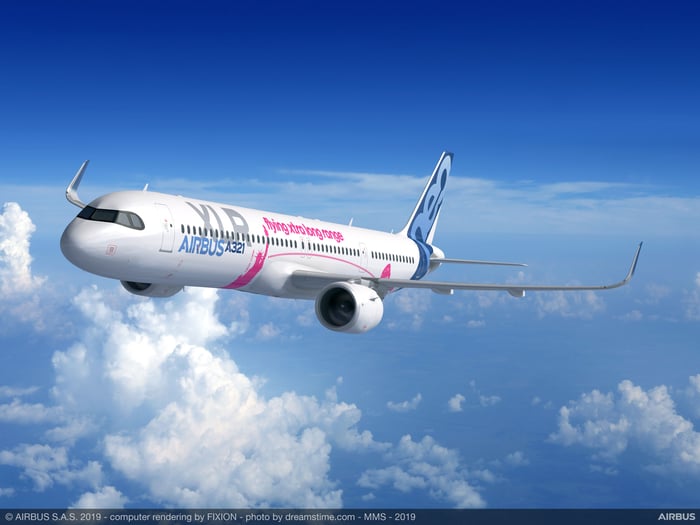 This increased range will allow the A321XLR to cover significantly more transatlantic routes. It will also be capable of flying between India and Europe or between Australia and China. The A321XLR is the closest thing to a direct replacement for airlines' aging Boeing 757-200 fleets. Airbus claims it will offer a 30% improvement in fuel burn per seat over the Boeing 757.

Airbus announced only one firm order for the A321XLR on Monday: a four-aircraft deal with Lebanese flag carrier Middle East Airlines. However, there are undoubtedly additional orders in the pipeline that will be announced over the next few days.

Another big commitment from a top leasing company

While Airbus reported just this one firm order for the A321XLR, aircraft leasing upstart Air Lease ( AL -1.97% ) did sign a letter of intent to buy 27 A321XLRs. This was part of a 100-aircraft agreement that represents the biggest deal revealed thus far at the 2019 Paris Air Show.

In addition to the A321XLRs, Air Lease also committed to buy 23 standard A321neos, as well as 50 A220-300s. This brings Air Lease's total order book for Airbus aircraft to 387 jets, of which 119 had been delivered by the end of May. That's quite an impressive total, considering that Air Lease was founded less than a decade ago.

Airbus also signed a smaller, but quite important deal with U.K. carrier Virgin Atlantic on Monday. Virgin Atlantic placed a firm order for eight A330-900neos and agreed to lease another six from Air Lease, with deliveries between 2021 and 2024. These aircraft will replace its 14 current-generation A330s, most of which are leased. Virgin Atlantic also has options for six more A330-900neos that it can use for potential growth opportunities in the years ahead.

Orders for the A330-900neo are very valuable, because Airbus has struggled to build up its backlog for that aircraft type. Furthermore, there was no guarantee that Airbus would get Virgin Atlantic's business in this case, as the carrier already operates 17 Boeing 787-9 Dreamliners, which are similar in size to the A330-900neo.

Airbus still has plenty of work to do at the Paris Air Show to get itself back on track after its backlog shrank in the first several months of 2019. However, with two small firm orders and one big letter of intent -- plus a new aircraft model that is likely to attract substantial interest from airlines -- Airbus is off to a good start.