Before adding 5G support to all 2021 iPhones.

For the past couple years, Apple (AAPL 0.90%) has been releasing three new iPhone models per year, typically including two flagship devices and a more affordable model. Meanwhile, the industry's march toward 5G put the Cupertino tech giant in a precarious position, effectively forcing it to settle its legal dispute with Qualcomm (QCOM 1.20%) or risk its timeline for 5G-equipped iPhones. That armistice has now paved the way for 5G iPhones next year.

Here's what one top analyst is expecting in 2020. 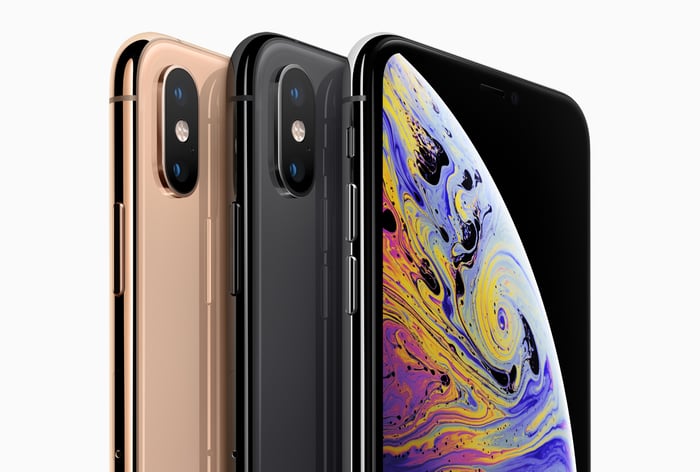 Widely followed analyst Ming-Chi Kuo of TF International Securities has released a research note this morning (via MacRumors and 9to5Mac) outlining what Apple likely has in the pipeline for 2020.

Apple is expected to again release three new iPhone models: a more affordable 6.1-inch model alongside two flagship iPhones with 5.4-inch and 6.7-inch displays. All three models are expected to feature OLED displays as Apple continues its ongoing transition to that technology; last year's iPhone XR still utilized a traditional 6.1-inch LCD display. That would suggest that Apple is making its standard flagship smaller compared to the current iPhone XS and its 5.8-inch display, while making the larger variant even larger than the iPhone XS Max's 6.5-inch display.

Additionally, 5G support may be a feature exclusive to the higher-end flagships -- supporting both sub-6 GHz and mmWave spectrum -- with the 6.1-inch model only getting 4G LTE connectivity. Apple frequently reserves state-of-the-art features for its pricier models as a way to encourage upsells before subsequently bringing those features to cheaper models. Apple would likely then include 5G support for all iPhone models in 2021, according to Kuo.

Apple is hard at work on its own in-house 5G modem, a component that likely won't be ready to ship until 2022 to 2023, according to Kuo's estimates. That would be sooner than other reports that suggested the company wouldn't have its 5G modem ready until 2025.

The analyst believes that Apple's settlement with Qualcomm includes access to some of Qualcomm's intellectual property around 5G that would aid in Apple's 5G development. The terms of that settlement are shrouded in mystery, with the companies merely saying in April that they had "reached a six-year license agreement" with an option to extend the agreement for two years.

The 2019 iPhones are still expected to use Intel (INTC 1.11%) modems. Chipzilla had said it was bailing on 5G modems mere hours after Apple and Qualcomm announced their settlement, but was still honoring its existing 4G commitments. "The company will continue to meet current customer commitments for its existing 4G smartphone modem product line, but does not expect to launch 5G modem products in the smartphone space, including those originally planned for launches in 2020," Intel said.