Here's why Disney is one of those magical stocks you can hold on to for tremendous long-term profits.

Some investors might be tempted to take their money and run after the fantastic start. However, I think Disney is a stock you can buy and never sell. Here are 12 reasons this is a great stock to hold for the long term. 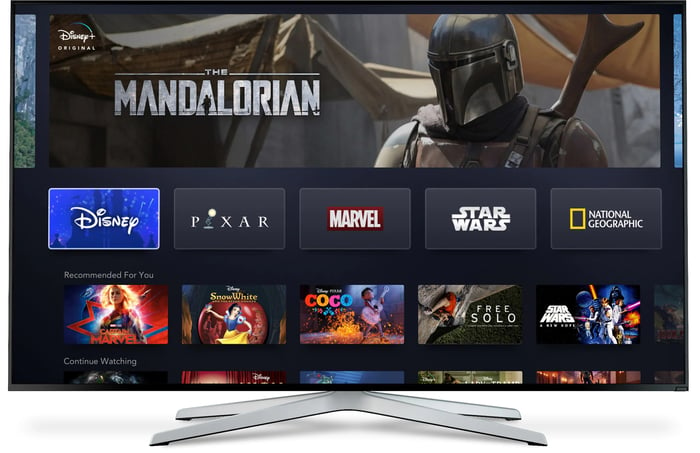 Brands matter. The Disney brand has been strong for most of the past 100 years. In the 12 major global markets where Disney operates, a whopping 95% of consumers are familiar with its brands. And they're not just familiar with those brands: Over 1 billion people identify themselves as Disney fans. Who wouldn't want to own a piece of a company with that large of a fan base?

In today's world, content is king. No company can claim the rich amount of content Disney can. So far, Disney has made more than 740 movies, stretching from Snow White and the Seven Dwarfs, released in 1937, to the just-released live-action Aladdin. That doesn't count the movies Disney now owns thanks to its acquisition of Twentieth Century Fox or Disney's hundreds of thousands of hours of television programs.

3. Greatest movie franchises of all time

It's not just Disney's quantity of content that gives the company a competitive advantage. The quality of Disney's movies -- in terms of moviegoers' votes with their pocketbooks -- is unsurpassed. Disney's Marvel and Lucasfilm movies include the most popular franchises of all time, including the Avengers and Star Wars films. Since 2006, the 22 films produced by Disney and Pixar have averaged $690 million at the box office. Since 2009, the 18 films produced by Disney's Marvel Studios have averaged $960 million in box office receipts.

Disney certainly dominates the big screen. It's big in the TV market, too. Disney's most valuable TV network, ESPN, has ranked as the No. 1 cable TV network among men for 13 years in a row. The company also owns several other popular networks, including ABC, Disney Channel, Freeform, Lifetime, and National Geographic. While these networks generate a lot of revenue for Disney, they also create more content on an ongoing basis that the company can monetize for years to come.

5. Kids will always want to go to Disneyland and Walt Disney World

The Disneyland and Walt Disney World theme parks continue to be favorite vacation destinations for families around the world. These parks have been the primary growth drivers for Disney in recent quarters. While Disney has several other ways to generate growth now, you can bet that kids will always want to go to Disneyland and Walt Disney World, ensuring that theme parks will make Disney a lot of money for a long time to come.

Speaking of kids, Disney should benefit from more of them in the future. Millennials are expected to overtake baby boomers this year as America's largest generation. While millennials have delayed having children longer than previous generations, that could change. A Pew Research Center survey found that 60% of millennials said that "being a parent is extremely important to their overall identity."

Another important demographic trend that should help Disney is occurring outside the United States. As middle classes in emerging markets expand, it will create larger potential markets for many companies, including Disney. The company is already seeing this in India, where household earnings are increasing by a compound annual growth rate of 10%. Disney projects that there will be 1 billion video screens in the country by 2023 -- a prime market for the company's entertainment offerings.

One of the top growth opportunities for Disney is in streaming. The acquisition of Fox gave Disney a majority stake in Hulu, the fastest-growing TV streaming service in the United States. The company's Disney+ streaming service launches this year. Disney expects as many as 90 million subscribers by the end of fiscal 2024. And ESPN+ streaming already has more than 2 million subscribers and continues to enjoy strong growth.

Disney doesn't talk as much about the potential for gaming as you might think it would. Don't underestimate the opportunity for the company to win in a major way as virtual reality games increase in popularity.

One key strength of Disney is its ability to cross-market its intellectual property. But the company also "cross-pollinates" by taking an idea and developing multiple streams of income from that idea. For example, Disney turns its animated movies into live-action movies, as it did with Aladdin and Dumbo. And it develops rides at its theme parks based on its popular movies, including the Star Wars and Toy Story franchises. Every hit movie has in the future could eventually be monetized in several other ways.

Disney has rewarded shareholders for a long time. Since 1980, the company has delivered a total return of more than 20,600%. Disney's return on investment capital (ROIC) -- one of the best metrics used to evaluate how well a company performs for shareholders -- is around 15% over the past 12 months, a healthy level that most investors will like.

Perhaps the most important financial measure for a company is its cash flow. Disney's free cash flow of more than $7 billion gives the company a solid financial foundation to keep its momentum going by investing in growth and rewarding shareholders through dividends and share buybacks.

All 12 of the things mentioned above fall into one of three categories: competitive advantages, growth opportunities, or financial strength. The best stocks claim strong competitive advantages, multiple growth opportunities, and solid financial health. Disney checks off all these boxes, making the stock one that investors can buy and hold, as Toy Story character Buzz Lightyear might say, to infinity and beyond.