Major benchmarks surged higher Tuesday after a tweet from President Trump said that he had a "very good telephone conversation" with Chinese President Xi Jinping. The Dow Jones Industrial Average (DJINDICES:^DJI) and the S&P 500 (SNPINDEX:^GSPC) posted strong gains. Both indexes are within 2% of all-time highs.

As for individual stocks, Facebook (NASDAQ:FB) unveiled its plans for a cryptocurrency service, and Innovative Industrial Properties (NYSE:IIPR) declared another big dividend increase. 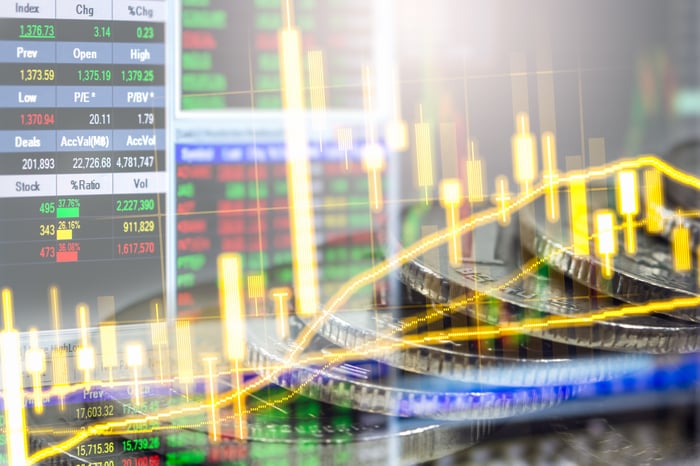 Cryptocurrency got a little closer to the mainstream after Facebook announced widely anticipated plans for financial services based on a new digital currency called Libra. Shares rose 4.2% yesterday on rumors of the announcement but slipped 0.3% in active trading today.

Facebook has formed a subsidiary called Calibra, which will introduce a digital wallet for Libra that will be available in Messenger, WhatsApp, and as a stand-alone app. Libra will be a cryptocurrency backed by physical assets to give it an intrinsic value and reduce the volatility that currencies like bitcoin have exhibited. Libra is governed by the independent Libra Association, which counts payment giants Mastercard, Visa, and PayPal among its founding members.

The company is attempting to head off privacy concerns, saying the Calibra subsidiary won't share account information with Facebook or third parties without consent and financial data won't be used to improve ad targeting in its other products. The service, expected to launch in 2020, is intended to address the needs of people without bank accounts, which make up almost half the world's adult population.

Innovative Industrial Properties (IIP), a real estate investment trust (REIT) specializing in leasing properties to cannabis businesses in the U.S., declared a 33% increase in its quarterly dividend to $0.60, and the stock rose 3.2%.

The dividend uptick gives the stock a forward yield of 2%, which isn't stellar compared to other REITs, but it comes on top of a 29% increase last quarter and a 40% boost last September. The payout is now 140% above that of the period a year ago, and the share price has moved up over 260% in that time.

Fast-growing IIP leases industrial buildings to medical marijuana producers. The facilities, including greenhouses, have specialized requirements for lighting, plumbing, and ventilation, as well as robust security systems. The company owns 21 properties in 11 of the 33 states that have legalized medical marijuana, with a weighted average lease length of 15 years. Adjusted funds from operations grew 275% in the most recent quarter.