Please ensure Javascript is enabled for purposes of website accessibility
Log In Help Join The Motley Fool
Free Article Join Over 1 Million Premium Members And Get More In-Depth Stock Guidance and Research
By Beth McKenna – Updated Jun 18, 2019 at 9:12AM

This REIT stock pays a dividend that's yielding 3.7% and has crushed the market's total return over the long term.

The key thing investors want to know, however, is where Realty Income will likely be in the future -- let's say 10 years from now.

Let's channel our inner Nostradamus and explore that question.

San Diego-based Realty Income was founded in 1969 and went public in 1994. It owned 5,876 properties in 49 U.S. states and Puerto Rico and had an enviable 98.3% occupancy rate as of the end of the first quarter. (In April, the company announced that it was buying its first international properties. In a sale-leaseback transaction, it acquired 12 properties in the U.K. for 429 million British pounds, or about $555 million, from Sainsbury's, a leading grocery store operator in the U.K. and Ireland.)

Realty Income's portfolio by rental revenue comprised 82% retailing, 12% industrial, and 6% other occupancies at the end of the first quarter. Of its total 261 tenants, its five largest were Walgreens Boots Alliance's Walgreens pharmacy chain, which accounted for just 6.1% of its total rental revenue, convenience store 7-Eleven, FedEx, Dollar General, and LA Fitness. The company targets tenants that are resistant to economic downturns and direct competition from online companies, namely the retailer killer named Amazon.com. These include service-based businesses and retailers that sell low-cost and/or nondiscretionary items, including dollar stores and drugstores.

Another factor in Realty Income's success is its use of long-term, triple-net leases (tenants pay property taxes, insurance, and maintenance expenses), with annual rent increases built in. All these components add up to produce a reliable, steady, and growing income stream, from which the company funds its dividend.

If we go back 20 years -- hello, June 1999, which saw Ricky Martin's "Livin' La Vida Loca" topping the music charts -- Realty Income stock's magnitude of outperformance is much greater. Thanks to the wonders of compounding, over the last two decades, it's returned 1,940% -- about 9 times the S&P 500's 217% return. 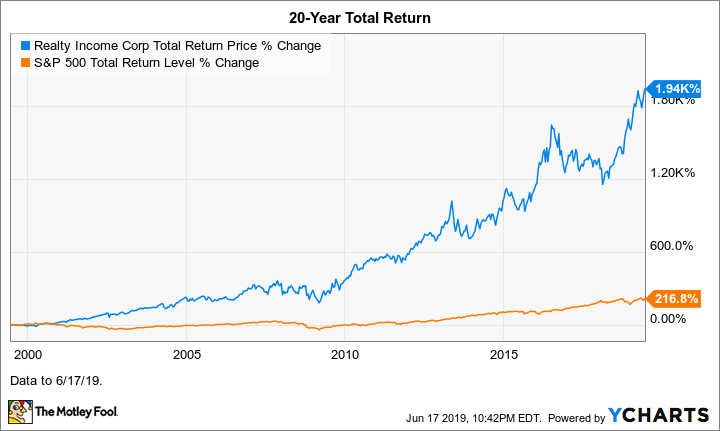 Where will Realty Income likely be in 10 years?

Realty Income should still be flourishing in 2029. Some points to support this opinion:

Winners often keep winning. Granted, the oft-repeated investment phrase "past performance is no guarantee of future results" is true. However, robust stock performance over the long haul is often indicative of a solid business model and strong management execution.

The company's business model should prove durable despite what will likely be considerable changes in the retail landscape in a decade. Among other things, online shopping's portion of total retail sales will almost surely have increased from today's roughly 10%, a decisive plus for Amazon. Nonetheless, even Jeff Bezos' ravenous beast isn't likely to disrupt certain businesses. As long as some folks like to exercise indoors among others and have a wide choice of equipment, there should be gyms. As long as Slurpee cravings exist, 7-Eleven should be around to serve up its iconic frozen drink.

John Mackey, CEO of Whole Foods Market, an Amazon subsidiary, is a member of The Motley Fool's board of directors. Beth McKenna has no position in any of the stocks mentioned. The Motley Fool owns shares of and recommends Amazon and FedEx. The Motley Fool has a disclosure policy.

Is This Monthly Dividend Stock Worth Buying Today?