Shares of imitation-meat stock Beyond Meat (NASDAQ:BYND) are valued almost beyond belief -- costing 88.5 times trailing sales at Tuesday's closing bell -- and infinity times the profits that Beyond Meat does not earn.

Believe it or not, the stock almost ended up costing even more than that. In early trading today, Beyond Meat stock surged as much as 18.8% before eventually giving back all of its gains and even a bit more. By the time trading was done, Beyond Meat actually ended the day down a small fraction of a percent. 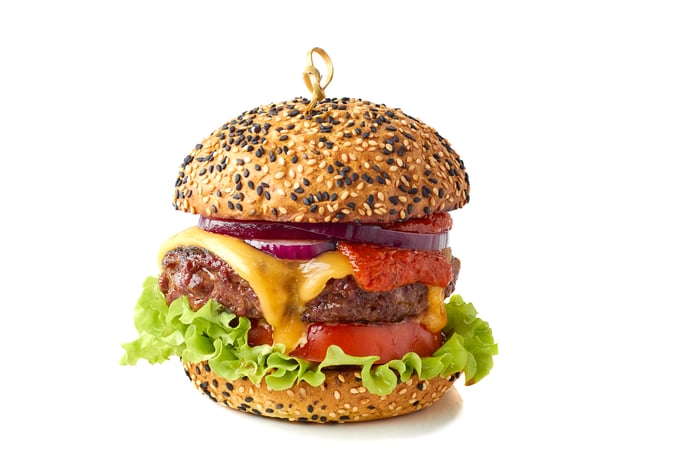 Basically, the story goes like this: On June 28, the Russell 1000 index of America's 1,000 biggest publicly traded stocks will rebalance its portfolio. Because the index is designed to own and track shares of every company valued at $2.4 billion in market cap and up, mutual fund and ETF managers who try to track the Russell 1000's holdings will essentially be forced to buy shares of Beyond Meat.

Knowing this, some investors appear to be scooping up Beyond Meat shares beforehand in hopes that when June 28 arrives, they will be able to sell these same shares to buyers who will have to buy them, regardless of price.

There's just one problem with that theory, however.

Yes, on June 28, some investors will be forced to buy Beyond Meat stock regardless of what it costs. But some does not equal all. At the same time as Russell 1000 trackers are gritting their teeth and reluctantly buying shares of a stock costing dozens of times its annual sales, everyone else will be free to try to cash in by selling the shares of Beyond Meat that they bought in anticipation of the rebalancing.

Result: While it's hard to make predictions, especially about the future, I'd say there's a very good chance that come June 28, we'll see a lot of folks who "bought the rumor" suddenly "selling the news" -- and instead of going up, Beyond Meat shares could very well go down.

That same realization may be why Beyond Meat stock, which started off Tuesday so strongly, saw its gains trimmed away as the day wore on.