Companies that may never have thought they would be buying clean, renewable energy are flooding to the industry in droves. Some are doing so because they can tout themselves as environmentally responsible to investors and customers, but we're beyond that as a main driver. Renewable energy makes good financial sense for companies around the world, and it's expanding the industry's potential market.

Growth companies like Facebook and Apple have been buying renewable energy for years and the number of projects continues to grow, but companies like 3M (NYSE:MMM) and Anheuser-Busch (NYSE:BUD) show that companies that are struggling operationally and focused on preserving bottom-line profits are investing in renewable energy as well. Here's why and how investors can benefit. 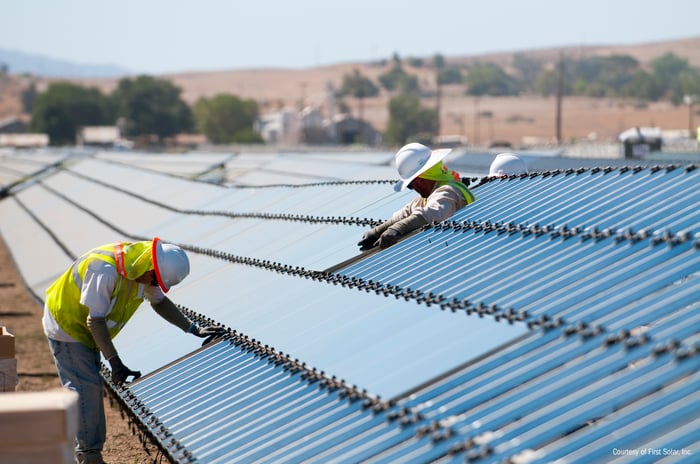 The virtual power plant becomes a go-to for corporate America

A recent deal between Anheuser-Busch and Recurrent Energy, a subsidiary of Canadian Solar (NASDAQ:CSIQ), shows how many renewable energy deals unfold today. The beer maker signed a deal to purchase the power from a 222 MW power plant in Texas. The project will send electricity to the broader grid (for a fee), not just to Anheuser-Busch, allowing the grid operator to aggregate multiple sources of power to keep the grid running. Anheuser-Busch ultimately buys the net electricity from the power plant.

3M is using similar virtual power plants to power its commitment to reach 50% renewable energy by 2025, no small task for a company that's used fossil fuels for more than a century.

These virtual power plant structures have been used all over the country with Apple, Microsoft, and Amazon.com regularly using them to power operations. From a scale standpoint, off-site power plants have become a favorite for corporate America, but that's not the only option they have.

The cheapest renewable energy power plants being built today, from a cost-per-kilowatt-hour perspective, are large utility-scale plants that feed into the grid like the one I highlighted above. But they aren't the only option. Some companies are installing solar power plants on their roofs or land adjacent to a facility because there's value in generating energy closer to home.

Walmart and Target are two of the biggest renewable energy producers in the U.S. and they install more of their projects on store roofs. Power is fed directly into the store, only sometimes being sent to the grid in what would be known as net metering.

In a growing number of projects, energy storage is being added so that low-cost renewable power produced on-site can be saved for later use when the cost of electricity from the grid rises or on-site production falls. SunPower (NASDAQ:SPWR), the biggest commercial solar developer in the country, says that over a third of its projects now include energy storage because it's more economical than building a solar power plant alone.

Power purchase agreements between renewable energy developers and companies are relatively simple and common, but ownership structures can get complex pretty quickly. A recent deal between Facebook and developer Longroad Energy Partners includes a power purchase agreement component and Facebook buying the tax equity portion of the project.

Tax equity includes the tax benefits that come with renewable energy projects, like the 30% tax credit and accelerated depreciation. They're usually sold to large, profitable entities like banks but they're now being included in power purchase agreements as part of some deals.

Rarely, companies will acquire the entire renewable energy project. It's not usually an asset that companies want to put on their balance sheet, and it's often more effective to sell projects to a utility or yieldco, which have a lower cost of capital than corporations.

The corporate renewable avalanche will continue

So far, 179 companies have signed the RE100 commitment to acquire 100% renewable energy. That list is growing, and it's adding companies that aren't flush with cash or using renewable energy as an advertising ploy. Companies see real cost savings from renewable energy, and as the cost of power purchase agreements come down, we will see even more corporate deals in the U.S.