It's a Techie Wednesday today in the after-market trading space. News about several players in the world of digital is crowding the business news headlines and moving stock prices.

The news items include a summons from a wing of the government, a quarter that well exceeded projections, and a company that's about to make its debut on the stock exchange. Read on for details. 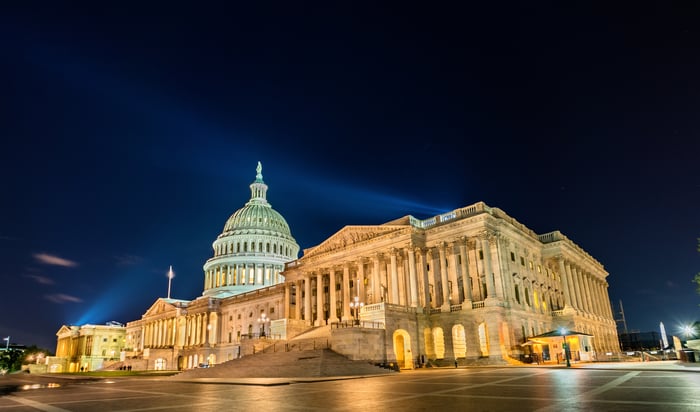 Facebook's cryptocurrency is in Senate sights

Facebook's (NASDAQ:FB) plans to mint a digital cryptocurrency have attracted a lot of attention from the public. But they're also attracting the attention of the government.

The Senate Banking Committee announced after market close today it would hold a hearing on the social media giant's move into cryptocurrency, in addition to other issues. Specifically, the tersely worded news release from the committee said it would explore "Facebook's proposed digital currency and data privacy concerns." The hearing is scheduled for July 16. No witnesses have yet been called for the proceeding.

The committee's ranking majority leader, Republican Sen. Mike Crapo of Idaho, said on Twitter that the move follows a letter the committee sent to Facebook in May "outlining several of our questions or concerns." It is not known if the letter received an official reply. Facebook has not yet publicly commented on this latest congressional hearing about its business.

Details about the Facebook currency, to be known as Libra, were unveiled by the company earlier this week.

It seems investors are mulling over the Senate scrutiny. Facebook is one of the most actively traded stocks in post-market trading tonight. It's down slightly from its closing price.

Another popular tech stock trading briskly this evening is Oracle (NYSE:ORCL), which released its Q4 of fiscal 2019 results just after market close.

Both line items represented convincing beats. On average, analysts had been expecting just under $11 billion on the top line and EPS of $1.07.

As with numerous other IT market veterans, Oracle has done well lately shifting its business focus to cloud services. The company specifically identified its Fusion and NetSuite applications as recent growth drivers.

In addition to being one of the more heavily traded stocks tonight, Oracle is also near the top of the gainers list. It's currently trading nearly 5% higher on the after-hours market.

A price is slapped on Slack stock

Much of tonight's stock market buzz centers on a tech company that isn't a stock at all... at least, not quite yet. That would be Slack Technologies (NYSE:WORK), the corporate messaging app specialist that is just about to launch its initial public offering (IPO).

Not long after market close, the New York Stock Exchange, which will effectively host the Slack IPO and list the stock under the wonderfully appropriate ticker symbol WORK, provided a reference price of $26 per share. The reference price serves as an indicator for traders as to what a fair level for the stock might be.

In a move that had, prior to this year, been unusual, Slack's IPO will not be a traditional one led by a syndicate of investment banks. Instead, this IPO will take the form of a direct listing, in which current shareholders sell some of their stock to the public via an exchange, without a middleman. The direct IPO method was most notably used by music purveyor Spotify Technology in its 2018 market debut.

The Slack IPO hits the market tomorrow. All told, the company consists of just over 194 million Class A shares (the Class that will be sold in the issue) and a bit over 310 million B shares. The latter confers 10 votes per shareholder, the former only one. We can expect lively action in the stock during the trading day, and probably in the post-market hours, too.