Few companies could get hurt by President Trump's ongoing trade war with China as badly as Apple (NASDAQ:AAPL), given the Mac maker's sheer size and impact on both of the world's largest economies. If the tweeter in chief's tariffs take effect, Apple's iPhone margins could get crushed by an estimated 4 percentage points -- either that, or the company would have to jack up already-lofty iPhone prices by a 14% just to offset the expense. Of course, Trump would ideally like Apple to move iPhone production back to the U.S., not understanding how unrealistic that is.

Apple is now reportedly exploring moving a chunk of iPhone production out of China, but those jobs wouldn't be coming stateside. 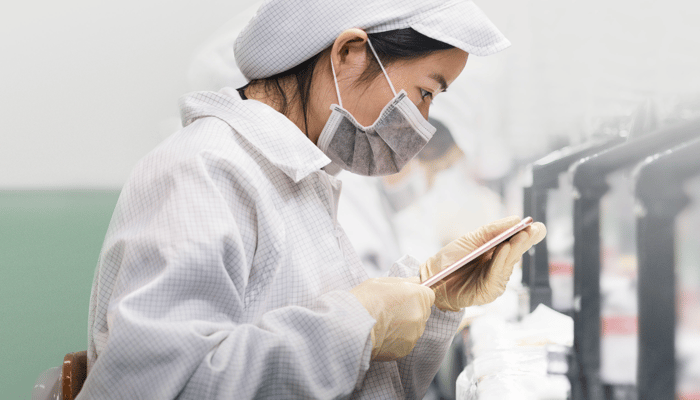 A production worker performing a quality check on an iPhone. Image source: Apple.

Spreading out across Asia

The Nikkei Asian Review reports that Apple has asked prominent suppliers to analyze moving 15% to 30% of iPhone production capacity out of China. Those suppliers include Foxconn, Pegatron, Wistron, Compal, Inventec, and Quanta, among others. That production would not be coming to the U.S., however, instead likely going to other countries in Southeast Asia, such as India, Indonesia, Malaysia, or Vietnam, according to the report. The closest that production could come to the U.S. would be Mexico, but Trump recently threatened to start a trade war with Mexico by imposing taxes on U.S. importers over the unrelated issue of immigration.

India and Vietnam appear to be the most promising countries to diversify production into, according to the Nikkei's sources. Apple has been slowly moving some high-end iPhone production to India, which also has an added benefit of giving the company more leeway in opening retail stores. India has complex regulations around foreign multinationals owning and operating retail stores, and Apple is preparing to open its first store in the world's second-most-populous nation.

Shortly after Trump was elected but before he began waging trade wars the world over, Apple had previously asked Foxconn and Pegatron to evaluate moving iPhone production to the U.S.

It's not just Trump

Tariffs are just one reason Apple is considering the transition, albeit a major one. The tech titan is now realizing that having its supply chain concentrated so heavily in China is also a risk, and diversifying the production base could be beneficial for other reasons as well. "A lower birthrate, higher labor costs and the risk of overly centralizing its production in one country," one source told the Nikkei. "These adverse factors are not going anywhere."

The global consumer electronics supply chain has been consolidating in Asia for decades, so while Apple might try to move some of its operations out of China, it still needs to be nearby to leverage the logistical efficiencies that close proximity offers. That's why it is asking a constellation of suppliers to consider moving around, which would take years.