Most people in this country consider themselves to be middle class, and here are some results from a poll about this core group.

There's no single definition of "middle class." Some define it as simply the middle half of Americans by income level, while others look at it as more of a lifestyle. 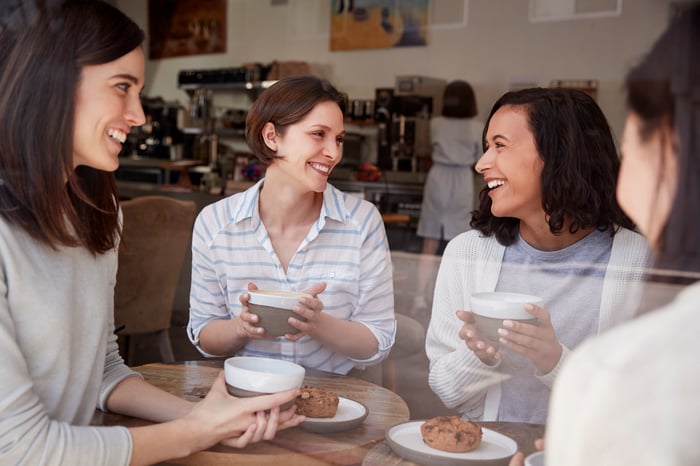 Who considers themselves to be middle class?

Not surprisingly, the majority of Americans put themselves in this category. According to The Ascent's survey, about 85% of millennials and Generation X-ers and 77% of baby boomers consider themselves middle class.

What income do you need to be considered middle class?

This depends on whom you ask. The Pew Research Center sets a minimum income level by family size:

On the other hand, Americans seem to think that this isn't quite enough. The perceived minimum middle-class income for a one-person household ranges from $43,610 to $47,814, depending on the age group. Gen X-ers think that you need the most to be considered middle class, while baby boomers' average response was the lowest, although still significantly higher than the actual definition.

How happy are middle class Americans?

One of the defining characteristics of this demographic is a general sense of contentment with their finances. For example, according to The Ascent's survey:

How much do middle class Americans work?

Despite the popular perception that most Americans work far more than 40 hours per week, that doesn't appear to be the reality. According to the survey, people who consider themselves to be middle class work an average of 39.2 hours per week. This ranges from a low of 34.9 hours for middle class Americans with education jobs to a high of 42.7 hours for those who work in technology.

So it's fair to say that the 40-hour workweek remains the standard, at least for the middle class.

How much do middle class Americans spend?

The average middle class American spends $2,833 per month, not including taxes and savings. This breaks down as follows:

But there's a big discrepancy among age groups. The average middle class millennials, for example, spend $2,898, but the average middle class Gen X-ers, who are generally further along in their careers and earn a bit more, spend $3,258. And the average baby boomers' spending habits are by far the lowest at just $2,176 -- many are retired, most don't pay for child care, and many have paid off their homes.

Here's one of the most important takeaways: Middle class Americans often don't feel financially secure. Over 40% of people who put themselves in this demographic report living paycheck to paycheck. And, nearly 50% of them feel financially insecure.

Is being middle class an income question or a lifestyle one?

As a final point, survey respondents were asked what traits make a person middle class, and there were a few common answers. By far, the two most commonly perceived defining characteristics are the ability to pay bills on time and having job security.

In addition, more than half of respondents also said that middle class individuals should be able to save money (interesting, since more than 40% report living paycheck to paycheck) and that another defining characteristic is having time and money for a vacation.

Whether you agree with these traits or not, the takeaway is that being middle class might not be about how much you make or spend -- maybe it's a certain standard of living.