Stocks rose in a broad rally Thursday as an easing of trade worries and dovish comments by the Federal Reserve set the stage for a record-high close for the S&P 500 (SNPINDEX:^GSPC). The Dow Jones Industrial Average (DJINDICES:^DJI) also gained close to 1%. 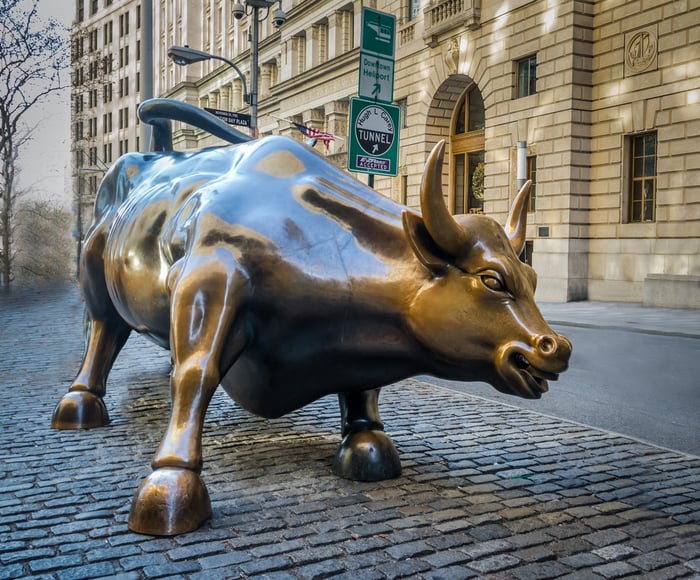 Shares of collaboration software specialist Slack Technologies started trading publicly today in a direct listing, opening 48% above the $26 reference price set by the New York Stock Exchange and rising 0.5% higher to close at $38.62. At the end of the session, the company was valued at over $20 billion.

Slack sells a platform designed around chat groups that is intended to replace email as the primary communication tool within organizations. The company had over 10 million daily active users and 95,000 paying customers in the most recent quarter, with the latter figure up 42% from the period a year ago and 8% sequentially. Revenue in the fiscal year ended January 31, 2019, was $401 million, up 82% from the prior year, with a net loss of $139 million. Adjusted free cash flow in the most recent quarter was negative $34.2 million.

Unlike an initial public offering, a direct listing doesn't raise money for the company, but Slack already has plenty, with $793 million in cash and securities on its balance sheet. Investors at the moment seem to have a limitless appetite for shares of fast-growing, unprofitable unicorns, so today's warm reception is no surprise.

Grocery chain Kroger met Wall Street expectations for its fiscal first-quarter results, but weakening sales trends discouraged investors, and shares fell 2.2%. Sales declined 1.3% to $37.3 billion, a bit above the $37.2 billion analyst consensus. Adjusted earnings per share of $0.72 was in line with expectations.

Identical sales excluding fuel grew 1.5%, which was less than the 1.9% growth Kroger reported last quarter and in the period a year ago. Digital sales increased 42% compared with last year. Kroger doesn't break out those sales in its report, but on the conference call said that the annual run rate of digital revenue reached about $5 billion in 2018, or about 4% of total sales.

Kroger had appeared to make progress with market share in 2018, so the identical sales results were surprising given the investments the company is making in its "Restock Kroger" initiative and its success with digital sales. The company maintained guidance for identical sales growth above 2% for the full year.