This is a clash of the old and the new.

On the been-in-business-for-decades side, we have payment card giant Mastercard (NYSE:MA), which needs no introduction. The youthful company is Store Capital (NYSE:STOR), a quickly rising real estate investment trust (REIT) specializing in retail properties. So which is the more advantageous stock to own at the moment -- the grizzled veteran or the upstart newcomer? 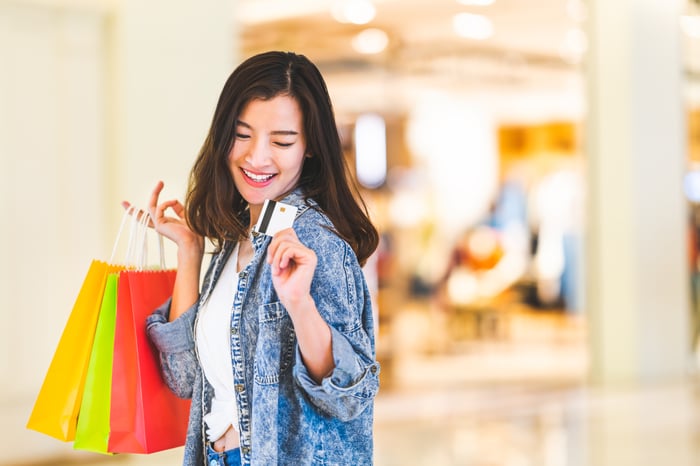 The retail sector has been contending with the retail apocalypse for some time now, but you'd never know it from Store Capital's results.

Take the company's first-quarter performance. Store Capital managed to grow its revenue by a very robust 24% year over year. Its all-important adjusted funds from operations (AFFO) increased even more, by 26%. Over the last six reported fiscal years, the REIT managed to more than double its revenue and grow AFFO more than threefold.

Store Capital smartly zeroes in on retail-apocalypse-resistant tenants like gyms and restaurants -- the kinds of places a customer needs to visit in person. Compounding this advantage, it's a triple net lease operator, which means its tenants are the ones paying property taxes, insurance, and maintenance expenses. Finally, Store Capital's standard is to rent on a long-term basis; often its leases last 15 years or more.

No wonder, then, that Store Capital's overall occupancy is 99.7%. Which is excellent for a retail REIT that holds 2,334 properties (as of the first quarter).

For the entirety of 2019, however, the company might not post the impressive growth numbers of previous periods. It's estimating that AFFO will come in at $1.90 to $1.96, which on a relative basis isn't far above the $1.84 it posted for fiscal 2018.

A master of payments

Mastercard has also been doing swimmingly of late. The world is, sensibly, moving away from cash toward alternate means of payment. And oftentimes that alternate means is payment cards. In fact, in 2016 -- according to research company Euromonitor -- the volume of plastic transactions exceeded that of cash transactions for the first time in history.

And guess who's one of the big beneficiaries of this trend? That's right, payment card master Mastercard -- also archrival Visa (NYSE:V), but that's a stock for another time. Mastercard has been posting impressive growth for many quarters in a row, to the point that it's become commonplace.

Its first quarter was typical -- 9% improvement on the top line, with net profit advancing 25%. As an open-loop payment processor -- again, like Visa -- Mastercard has a consistently high profitability. Its Q1 net margin was nearly 50%, not unusual for this company. That's not too far away from King of Cards Visa, with 55% in its most recent quarter.

The War on Cash is only going to get more lopsided. How often these days do you see someone paying for goods in bills and coins, as opposed to a card or smartphone? As the world's No. 2 payment card brand -- plus an active participant in other alt-payment methods such as digital wallets -- Mastercard is beautifully poised to take advantage of this.

Of the two, Mastercard is the more compelling growth story. Analysts are projecting 12% revenue improvement for the company this fiscal year, with per-share net profit rising 17%. Store Capital's internal AFFO projections for 2019, as previously stated, land only in the single digits.

Further into the future, the five-year PEG ratios for the two stocks match up at 1.8 (Mastercard) and 6.5 (Store Capital, which has been a popular stock among REIT investors). Finally there's the dividend, and the clear advantage here goes to Store Capital -- its 3.7% yield is modest for a REIT but rich compared to the wider stock market. On the other foot, Mastercard's is as thin as one of its plastic rectangles, at 0.5%.

With the retail apocalypse, Store Capital has a good chance of picking up new properties on the cheap, then turning around and triple-net-leasing them to apocalypse-resistant tenants. Yet Mastercard is a powerful global player that will only get stronger on the back of the migration away from cash.

In short, I think Mastercard's growth prospects are better, and it's more attractively valued. The income investor in me is dismayed by that low yield, but a dividend isn't everything. Mastercard is my pick in this contest.