America’s largest supermarket chain is a retail survivor -- but it still has a lot to prove.

Kroger (KR -1.22%), the largest supermarket chain in America, was once considered a promising growth stock. Between 2006 and 2016, its annual sales surged 74% from $66.1 billion to $115.3 billion, and its EPS rose 33%, buoyed by the stability of its core business and acquisitions of smaller chains.

That three-year sell-off reduced Kroger's forward P/E to less than 10, and it still pays a decent forward yield of 2.4%. Do those numbers indicate that Kroger is a value play for patient investors, or is it a falling knife that could still wound the bulls? 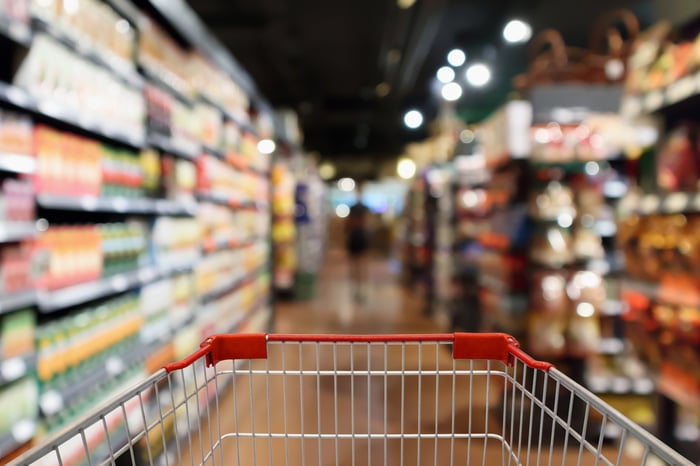 Kroger's identical-store sales, excluding fuel sales, held steady over the past year, indicating that it wasn't losing too many shoppers to its rivals.

Kroger's forecast for 2% to 2.25% adjusted identical sales growth for the full year was also encouraging. However, Kroger's gross margin is contracting due to the lower margins and softer performance of its pharmacy segment.

Kroger's gross margin of 22.2% in the first quarter initially looks like a 40-basis-point improvement from a year earlier. But on a FIFO (first-in, first-out) basis, which excludes fuel sales, its gross margin fell 40 basis points.

Kroger's operating margin also slid from 2.7% to 2.4% as it pumped more cash into its "Restock Kroger" turnaround plan. That three-year initiative, which started in late 2017, aims to optimize prices and product selections with analytics, expand its portfolio with private-label and acquired brands, and launch new e-commerce services and delivery options. 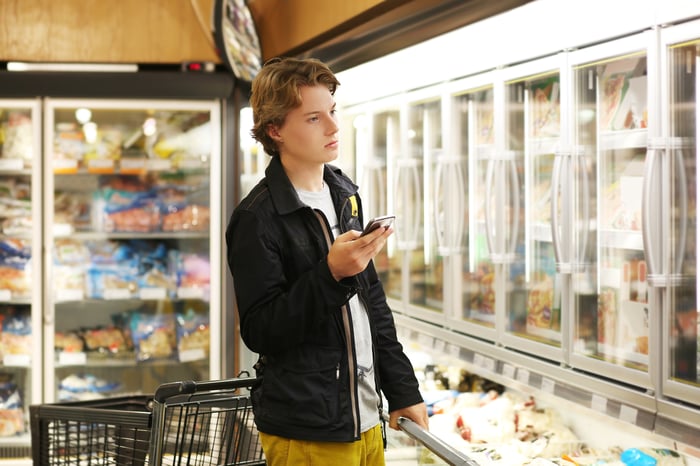 These efforts are paying off. Kroger's digital sales rose from nothing in 2014 to an annual run rate of $5 billion in 2018. That accounted for just 4% of Kroger's top line, but its digital sales are still soaring, with 42% growth in the first quarter. Kroger believes that it can eventually hit $9 billion in annual digital sales.

Kroger also noted that its digital services now cover 93% of its customers. That reach was boosted by the launch of its pickup service ClickList, its direct-to-consumer shipping platform Ship, partnerships with couriers like Instacart, and a big investment in British online grocer Ocado.

These moves all widen its moat against Amazon, Walmart, and Target -- which are all ramping up their grocery pickup and delivery efforts in a digital arms race. Between January and December 2018, the number of "click-and-collect" locations at select retailers across America surged from 2,451 to 5,800, according to CommonSense Robotics -- with Amazon, Walmart, and Kroger leading the charge.

Kroger's margins will remain throttled by its Restock initiatives, but it expects its steady sales growth and consistent buybacks to boost its adjusted EPS 2% to 6% for the full year. It has also hiked its dividend for 10 straight years.

Kroger's growth is stable, and like Walmart, it can counter Amazon by turning its network of 2,761 stores into hubs for digital pickups and deliveries. But Kroger can't afford to grow complacent, since Amazon is still aggressively cutting prices at Whole Foods (especially for Prime subscribers), and Walmart and Target are launching even more aggressive digital initiatives.

I think Kroger's low valuation, decent dividend, and sound turnaround plans make it an attractive investment at these levels. It probably won't rebound until its margins stabilize, but I think its downside is fairly limited.