This article was first published by MyWallSt.

People are spending far more on their pets.

In 2018 pet care spending in the U.S. was roughly $72 billion. That's an increase of 4% from 2017, with the expectation of a similar growth figure in 2019. There are a countless number of surveys that support this claim and some really interesting numbers to go with. 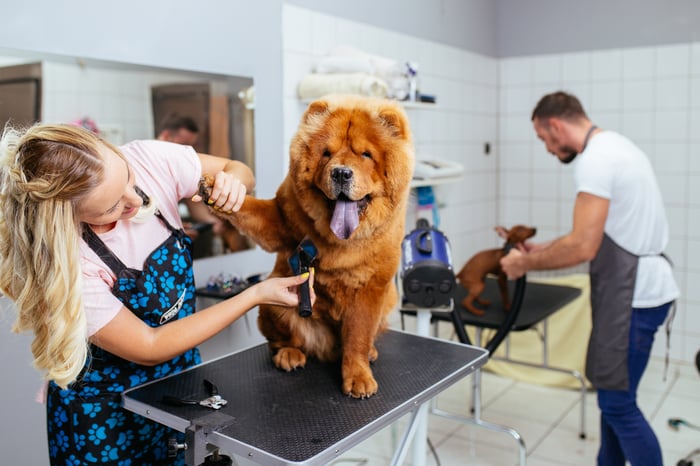 Ones that stood out included:

There are a number of shifting social norms that appear to have led to this. Perhaps the most convincing argument is the age at which people are getting married. In the 1950s, the average age at which women got married in the U.S. was 20, while for a man it was 23, according to the U.S. Census Bureau. Fast forward to today and couples are delaying tying to the knot until much later — 27 for women and 29 for men. Instead, they are choosing to focus on their careers and education in their early adult years.

There's also been a big shift in the size of families. In his brilliant book, 'Factfulness: Ten Reasons We're Wrong About the World — And Why Things Are Better Than You Think', Hans Rosling points out that, back in 1948, women had 5 children on average. That number was stable until about 1965 when it began to fall dramatically. Today, the world average is 2.5, with that figure starkly lower in developed nations.

So today we see people either delaying or completely foregoing having children, and in their place, they are adopting pets. Furthermore, in those families that have both children and pets, the families tend to be smaller and therefore the pet is elevated to a more important member of the family.

When looking at this global trend here at MyWallSt there are two stocks that we like.

Trupanion (NASDAQ:TRUP) is the largest pet insurer in the U.S., providing medical insurance plans for dogs and cats both in the U.S. & Canada. Even though the U.S. leads the world in pet care spending, it lags behind when it comes to pet insurance. It's estimated that only 1% of pets in the U.S. are insured. Compare this to the UK which is 10% and Scandinavia at almost 25%.

Founder and CEO Darryl Rawlings, who still owns over 7% of the outstanding shares, started Trupanion because his family had to euthanize their dog in the face of a hefty vet bill. From those first days in Canada, the business expanded into the U.S. and became the first North American pet insurer licensed to provide its own underwriting.

Idexx Laboratories (NASDAQ:IDXX) is the world leader in pet diagnostics for companion animals. Idexx sells the table-top diagnostic machines to vets for a once-off fee and then sells the testing strips on a per-use basis. This is the "razor and blade" model that brands like Gillette and Nespresso have perfected and is incredibly attractive, offering long-term recurring revenue and tying your customer to your product for many years.

In a recent study, Idexx found that one out of every seven of these tests uncovered a significant issue in adult animals, with those numbers higher for animals in the latter part of their lives. With animals unable to tell vets what is wrong with them, diagnostic tests essentially become the "voice of the animal".

Already firmly established in the U.S., growth opportunities exist in cross-selling to existing customers, as well as in Europe, where spending on pets is starting to see the kind of explosive growth that North America has witnessed over the last ten years. The company crossed the $2 billion mark in sales last year, while spending on companion animal diagnostics is predicted to grow between 6 and 8-fold over the next 25 years.

Idexx are the biggest identifiable spender on research and development in this space (they have some private competitors that don't report it), have strong client relationships, and a great management team fostering innovation. If you see the trend in pet spending all around you and want to get in on the action, this is a great long-term buy-and-hold investment.

Check out more great articles like this at MyWallSt now.