They're looking to make money from investing, but they're also looking for a little more safety than most stocks can give them. That's why many turn to dividends, as they're usually the hallmark of a more mature company with cash left after paying the bills that it can give to investors.

Unfortunately, many dividend stocks are less stable than they might initially appear. That's why Dividend Aristocrats -- an elite group of dividend stocks that have raised their dividends for at least 25 consecutive years -- are so exciting. 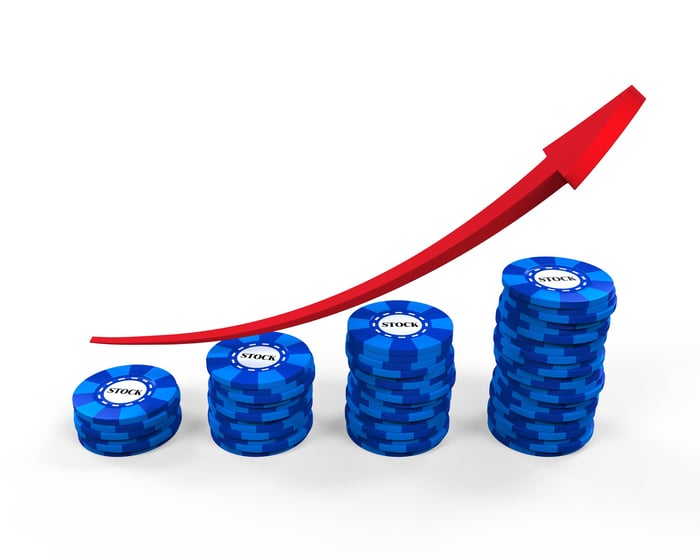 These companies have prospered through thick and thin. Keep in mind that every current Dividend Aristocrat hiked its dividend through the dot-com crash and the Great Recession.

Here are three of my favorites.

Remember when I mentioned that Dividend Aristocrats had to have at least 25 consecutive years of dividend increases? Well, Johnson & Johnson (NYSE:JNJ) has notched 56 consecutive years of dividend increases -- an incredible record that speaks to the strength and durability of its underlying businesses. Plus, it's one of only two companies to currently hold a coveted AAA credit rating.

Johnson & Johnson's strength fundamentally comes down to the diversification across its businesses. In addition to its large and growing pharmaceuticals division, J&J earns almost half of its revenue from its sleepier (but more stable) medical devices and consumer products segments. That sort of diversification positions the business well to accept setbacks in one space while retaining stability and optionality elsewhere.

And its diversification even within each of its businesses is impressive. For example, Johnson & Johnson's pharmaceuticals division showed 7.9% year-over-year operational revenue growth despite Remicade -- its largest drug by sales -- losing patent protection last year and promptly watching its sales decline. The division is largely being buoyed by the 30%-plus year-over-year sales growth in three of its other best-selling drugs: autoimmune drug Stelara, blood cancer drug Imbruvica, and multiple myeloma drug Darzalex. All three are in phase 3 trials for additional indications, giving the pharmaceuticals segment plenty of options for growth from here.

That strength and underlying growth, combined with a 2.7% dividend yield, makes J&J a fantastic dividend aristocrat for any investor to own.

Federal Realty (NYSE:FRT) is a real estate investment trust (REIT) that acquires properties and then rents them out to tenants. Its primary area of focus is retail, although some of its properties also feature hotels, office space, and apartments.

Like J&J, Federal Realty's value proposition really comes down to diversification. No single tenant represents more than 2.7% of Federal Realty's rental income, which insulates the company nicely from business risk tied to any individual renter. And with a portfolio of 105 properties spanning desirable metro areas like Silicon Valley, Washington, D.C., Los Angeles, Miami, and Chicago, the company is both able to keep space filled (its portfolio is 94% leased as of Q1 2019) and command premium rents (Federal Realty charges 50% higher rent per square foot than its peer group).

In fact, Federal Realty has increased its rents every year since 1998. In 2009 and 2010 -- when its peers reported flat or even decreasing rents -- Federal Realty hiked rents by 10% and 8%, respectively.

With a 3.1% dividend, Federal Realty Investment Trust's yield is lower than you'd generally expect for a REIT. But given the underlying quality of its properties and its long history (51 years!) of dividend increases, it's clear that Federal Realty is a great anchor for any dividend portfolio.

Although most of us think of Coca-Cola (NYSE:KO) as a dominant beverage company due to the ubiquity of its brands and its overall size and scale, the fact is that there's still plenty of room to grow. Coca-Cola only commands 21% market share in cold beverages in the developed world (and half that in emerging and developing markets), and it has a tiny share in hot beverages.

It's no surprise, then, that Coca-Cola continues to show solid growth even in its best-known products -- with its Coke brand delivering 6% year-over-year retail value growth in key markets in the first quarter of 2019 based on the strength of Coke Zero Sugar and Orange Vanilla Coke.

Additionally, management is targeting hot beverages to strengthen and deepen Coca-Cola's reach. The recent acquisition of Costa Ltd. (and its associated coffee products) gives Coca-Cola a sizable opportunity to deepen its expansion into hot drinks. Additionally, after testing Coke coffee, Coca-Cola now plans to roll it out to 25 markets around the world before the end of 2019.

Tack on a dividend yielding 3.1%, and it's easy to see why Coca-Cola rounds out today's list of great dividend stocks.

The best part about these dividend aristocrats isn't just that they've prospered through thick and thin for a long time. What makes them exciting for investors is that each of these companies has a credible plan for further growth. Sure, dividends are nice -- but dividend growth happens when companies can continue and expand that prosperity into the future.