Eighty-six percent of U.S. college students use mobile payment apps, according to a recent survey by Sallie Mae and Ipsos, making it the top payment method on campuses. Debit cards ranked second at 85%, followed by cash at 81%, and credit cards at 57%.

That marks a shift from 2016, when 77% of students used mobile payments. The survey also found that one company -- PayPal (NASDAQ:PYPL) -- dominated campuses with its namesake app and peer-to-peer payments app Venmo. 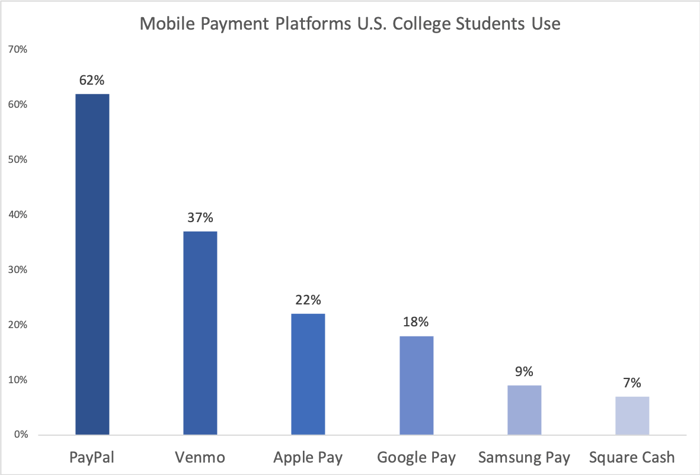 PayPal and Venmo's popularity can likely be attributed to two factors. First, both apps run across multiple platforms. Apple Pay is only integrated into the tech titan's own hardware devices, while Alphabet's Google Pay targets Android users.

PayPal also has a first-mover advantage in the online payments market, and Venmo -- which PayPal acquired through its takeover of Braintree in 2013 -- popularized peer-to-peer payments. Venmo's social component, which enables users to send money through messages, is also a natural fit for younger users.

PayPal hasn't won the war yet, but it probably won't be easy for Apple, Google, and other challengers to unseat the market leader -- especially when it has a tight grip on America's Gen Z users.