There is a certain allure to buying a penny stock because with shares trading below $5, you can pick up a lot of shares for relatively little money. And if such a stock heads higher by just a few bucks, well, you can make a killing. Yet with that potential for big rewards, you're also taking on some outsize risks -- risks that can often result in an investor losing much or all of their investment.

That doesn't mean you should shun anything on the riskier side of the risk-reward continuum, but you do need to be smart about ensuring there really is a potential to profit. Penny stocks bring way too much of the risk and far too little of the reward to the table. But stocks such as MercadoLibre (NASDAQ:MELI), Tellurian (NASDAQ:TELL), and ShotSpotter (NASDAQ:SSTI) swing the odds back in your favor. 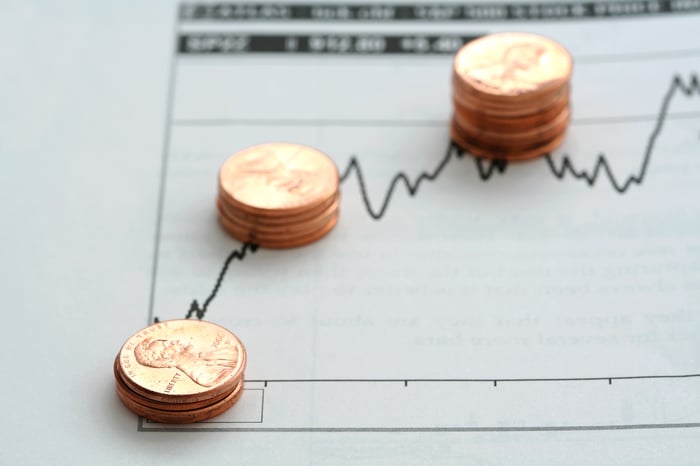 A $600-plus penny stock alternative? Yes!

Jamal Carnette, CFA (MercadoLibre): You may be surprised to see a $600-plus stock on this list -- if so, you've fallen prey to a common misperception in investing. You see, it's not the initial cost you should focus on, but rather returns. After all, a 1,000% return is the same whether you own 600 shares of a $1 stock or only one share of a $600 stock.

Therefore, the key is to look for companies with favorable risk/return profiles and the potential for mind-boggling growth. MercadoLibre is one such company. As the operator of Latin America's largest e-commerce business, the company will continue to benefit from increasing internet penetration and growing disposable income within the region.

However, it's not the e-commerce site that I'm most excited about, but rather its Mercado Pago payments solution. During the fourth quarter, off-platform payments exceeded on-platform payments, which is a fancy way of saying people used the service more to make purchases on other websites than they did on MercadoLibre.. In the recently reported first quarter, total payment volume increased by 83% (in local currency).

If MercadoLibre could become the de facto digital payment solution in Latin America -- akin to PayPal in the U.S. -- that would be a game-changer for the company. That's likely one reason why PayPal cut MercadoLibre a $750 million check this spring. Forget penny stocks: MercadoLibre is poised to provide significant returns over the next decade.

A risky stock with a potentially huge payoff

John Bromels (Tellurian): If you're interested in investing in penny stocks, that already tells me that high levels of risk don't necessarily bother you, as long as the potential reward is great enough. And that means you might be the type of investor who'd be interested in shares of fledgling liquefied natural gas (LNG) company Tellurian.

Tellurian was founded in 2016 by a group of industry insiders who wanted to cash in on the country's rapidly rising natural gas output -- a trend propelled by fracking and other technological advances. They believed that the United States would soon be producing so much natural gas that it would become a major natural gas exporter, and they envisioned creating an integrated company -- that is, one that not only produced, but also transported and exported, natural gas -- to cash in.

So far, their thesis appears to have been correct: Numerous companies are constructing LNG export terminals and gas pipelines, and natural gas production, especially in the Permian Basin, is at all-time highs. So why isn't Tellurian a slam-dunk investment?

Well, because it takes time to plan and get approval to build natural gas infrastructure like pipelines and terminals, and even more time to actually construct them and bring them online. Tellurian has just gotten government approval for its Driftwood export terminal and associated pipeline; now it needs to secure the necessary financing and start construction. Even under the most rosy scenario, Driftwood won't start paying off for investors until 2023.

That sounds like a long time to wait, but CEO Meg Gentle believes that once Driftwood ramps up, investors could be looking at $8 per share in cash flows (at current share count). Considering the stock is currently trading at less than $8 per share, the reward proposition is huge. Of course, it's still a risky investment, but it's a lot less risky than many penny stocks.

A shot at growth and profitability

Rich Duprey (ShotSpotter): Stung by a revenue and earnings miss last month, gunshot detection leader ShotSpotter's stock lost nearly one-fifth of its value in a single day. What the market missed, though, was that this company is still a growth story that's on track to posting profits by the end of the year.

Many penny stocks have the opposite problem. Although they offer a good "story," their actual ability to sell products and turn a profit while doing so is often quite weak. The better choice is to look for companies that have proven there is an actual market for their goods or services, and that have a real plan in place to make money, even if they aren't doing so yet.

That's the case with ShotSpotter. Despite missing Wall Street's expectations for sales growth, it still posted revenues that grew 39% to $9.6 million in the first quarter. And though it produced a $0.03 per share loss, compared to forecasts for a $0.02 per share loss, it dramatically improved its position relative to the $0.09 per share loss it posted in Q1 2018. Analysts are still expecting ShotSpotter to turn profitable by the end of the year.

Gun violence is a problem, and ShotSpotter's wide area detection technology helps police departments nationwide zero in on where such incidents happen, and can even perceive whether there are multiple shooters, or if high-capacity weapons are being used.

It's not a cheap stock by any stretch, trading at 93 time projected earnings and 13 times sales, but this small-cap company is still growing, will likely be profitable, and is already generating positive free cash flow, meaning it has an increasingly stable financial footing.

That's something a lot of penny stocks can't offer, which is why ShotSpotter is worth taking a look at instead.