After many years of high expectations, liquefied natural gas (LNG) exports are finally starting to ramp up in the United States, moving from essentially zero only a few years ago, to some 3.6 billion cubic feet of natural gas per day today. That number is set to grow substantially this year, with export capacity expected to approach 9 billion cubic feet per day by the end of 2019, as several more LNG export facilities come online.

But that's just the tip of the iceberg. According to the U.S. Federal Energy Regulatory Commission, or FERC, there are more than a dozen export facilities approved and in some state of planning or construction, and another 18 either proposed or in pre-filing. In other words, the next decade is going to be very busy for America's natural gas export industry.

So where does Tellurian (NASDAQ:TELL) stand in all of this?

Today, nowhere, and it doesn't have a hand in any of the production coming online in 2019, either. The company's Driftwood LNG export facility and associated pipelines haven't even begun construction, and if they are completed on schedule, they won't generate a single dime in cash flows before 2023. 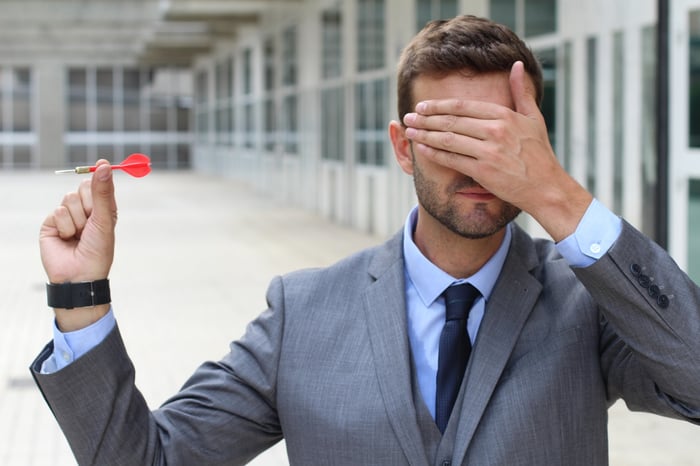 Put Tellurian in the "money I'm willing to risk lose" bucket. The upside's worth it. Image source: Getty Images.

In other words, any rational investment in the company requires an analysis of its long-term prospects, with a lot of speculation required to get at that end estimate. With that in mind, let's take a deep dive and project where Tellurian could be in 10 years, and whether that future is worthwhile for investors to take a stake in today.

A business plan, top executives, and not much else

At this writing, Tellurian is basically a business plan, some cash, a handful of deals with partners and potential LNG customers, and a management team with a very good track record of building a successful LNG export business.

The good news is, things are very close to starting to move forward. Tellurian issued a business update in early April, and its timeline for final approvals from FERC and making a final investment decision, or FID, on Driftwood, remain on track.

In January, FERC issued the final Environmental Impact Statement for Driftwood, on schedule with the company's expectation, and management expects to get the final FERC order in the first half of the year and make its FID quickly thereafter.

Once those two critical milestones are reached -- and the expectation is that Driftwood should easily attain approval -- Tellurian would move forward with construction before the end of the year.

Then comes the hard part: paying for it

Last year, Tellurian generated $10.3 million in revenue, on some LNG marketing and natural gas sales. As of Dec. 31, Tellurian had $409 million in total assets, with only $140 million of that in easily liquid items like cash, while also having $111 million in liabilities. Suffice it to say management is going to have to raise a lot of capital over the next few years. 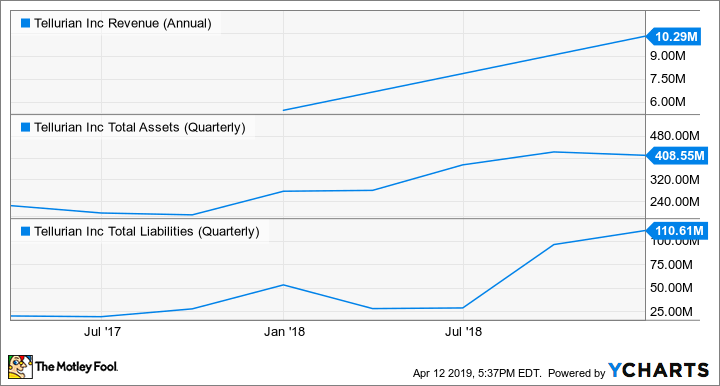 The company's planned strategy is one of the things which makes Tellurian compelling. Instead of taking on all the financial burden to build Driftwood, as Cheniere Energy has done with its LNG facilities, Tellurian plans to sell 58% of the facility to energy company partners, who will be able to buy a portion of the natural gas relative to their investment, at cost.

There's always additional risk and complexity for a project with multiple financial stakeholders, but the end result for Tellurian is that it will have to raise less capital to see Driftwood to completion, while its partners will also share in making sure its debt obligations are met.

According to the company's January presentation, it will cost $35 billion to build Driftwood and associated pipelines; at last report, Tellurian says $8 billion of that will be funded by partner capital, another $7 billion will be covered by cash flows the company expects to generate prior to commercial operations, with the remaining $20 billion to be funded by project-level financing.

What will it be worth for investors?

When operations commence in 2023, Driftwood will have a capacity of 28 million tons of LNG per year (MTPA). According to the January update, Tellurian will control 40% of that production, or 11.6 MTPA, which it estimates would be worth $2 billion in cash flows.

To put that in context, at the share count as of the date of the presentation in January, that would be worth about $8 per share in cash flows. With Tellurian shares trade for $10.30 per share at this writing, that makes the current price look ridiculously cheap. 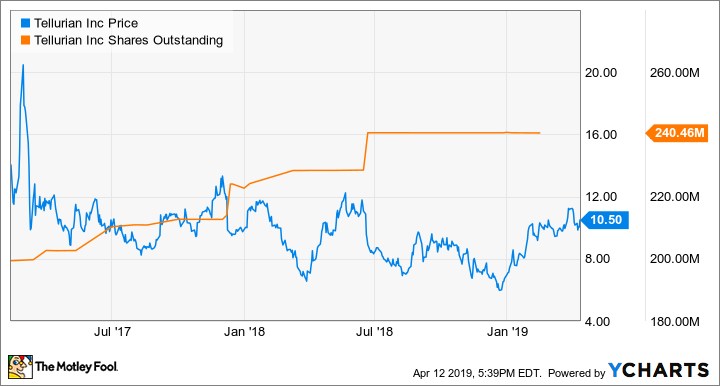 Here's the rub: Tellurian is almost certain to issue more shares over the next several years, both as part of deals to raise capital and deals to lock customers into supply agreements.

Case in point: On April 2, Tellurian and French energy giant Total (NYSE:TTE) announced an agreement with three parts. First, Total will invest $500 million to buy a stake in the Driftwood project that gives it rights to 1 MTPA of LNG at cost. Second, the two entered into a 15-year agreement for Total to buy an additional 1.5 MTPA from Tellurian at a market-based price. Third, Total agreed to buy 19.9 million shares of Tellurian stock for $200 million.

Yes, there's dilution; however, as part of the deal, Tellurian's stake in Driftwood would also increase by from 11.6 MTPA to 13.6. The end result is that Tellurian's share count went up about 8% as a result of this deal, but the amount of Driftwood's volume it will be able to sell will increase by 17%. That should translate to even better per-share cash flows.

10 years out: If things go reasonably well, shareholders could make a lot of money

Tellurian's future is completely tied to management's ability to secure more than $30 billion in capital for a project that won't start making anyone money before 2023. There are innumerable things that could happen between now and then, including a litany of macroeconomic events that could prevent financial partners from committing or being able to meet their funding commitments, delaying, derailing, or even killing this ambitious project before it ever gets off the ground.

If that were to happen, common shareholders would get wiped out. That's the risk.

However, the upside is very real. Natural gas is already replacing coal and even nuclear around the world, and the growth of Asia and Africa's middle class will mean far higher demand for cheap energy. With its roots set to be placed deeply in some of the cheapest natural gas plays in the world, Tellurian should see demand for LNG that outpaces what Driftwood can produce.

If the company can indeed generate anywhere close to $8 per share from its stake in Driftwood when it's in full operation, my expectation is that a decade from now, Driftwood will have been the first of multiple LNG export facilities the company has a partial or even complete stake in. If that's the case, it could be generating far more than $8 per share in cash flows, and paying a significant portion of that cash out to investors in dividends.

But we are a long way from that, and the hard part is what happens between now and 2023.