During the company's most recent earnings conference call, executives discussed the numerous factors behind a disappointing revision in earnings outlook.

Perhaps it's hyperbole to call it a perfect storm, but Carnival Corporation (CCL -1.99%) certainly encountered a confluence of factors that dimmed forward guidance when the cruise line reported fiscal second-quarter 2019 earnings on June 20. Shares have surrendered roughly 13% of their value since the report last week.

Carnival reduced its estimates for full-year adjusted earnings per share to between $4.25 and $4.35, compared to previous guidance of $4.35 to $4.55. Executives were quick to reassure shareholders of the company's long-term value creation opportunities, and the temporary nature of some of the earnings headwinds.

Below, we'll review relevant comments made by Carnival CEO Arnold Donald on the company's earnings conference call, which provide perspective on the cloudier outlook as the cruise operator heads into the back half of its fiscal year.

From our initial guidance for 2019, we acknowledge that we would not deliver for this year the growth rates in earnings and returns that our business is capable of, and that we are committed to deliver over time. And we are disappointed in the reduction to that guidance.

Donald's comment above is taken from a section of his prepared remarks on the earnings call which dealt with voyage disruptions of the company's Vista cruise ship. On the day of its earnings release, Carnival announced that three sailings of the Carnival Vista departing the port of Galveston, Texas had been scrapped for the July 6, July 13, and July 20 departures, due to a technical issue with the ship's maximum cruising speed.

The Vista's voyage disruptions will trim between $0.08 and $0.10 from full-year earnings per share, due to modified itineraries caused by the cruising-speed abnormality, the July sailing cancellations, and the unavailability of the ship's normal repair spot because of a damaged dry dock in Grand Bahama Shipyard.

Donald relayed to investors that the company was working closely with the ship manufacturer on this issue, as similar equipment is in place on other Carnival ships. At this point, management doesn't foresee additional disruptions on other ships -- the impact will apparently be limited to the Vista, and to the stated effect on full-year earnings. 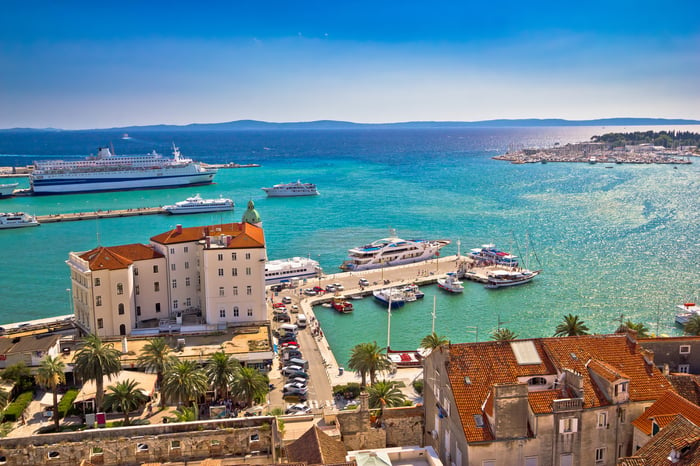 [O]ur Continental European brands have been facing heightened geopolitical and macroeconomic headwinds, which has impacted operating performance this year. Our growth in these markets has continued to outpace general travel, but growing into a contracting travel market has put pressure on ticket prices this year.

In Carnival's June 20 earnings press release, the company disclosed that favorable booking trends in the U.S. and Australia would be offset by lower revenue yields due to weakness in the European and Chinese markets.

During the earnings call, Donald noted that the company's German brand, AIDA Cruises, boasts some of the highest financial returns in the company's portfolio. Nonetheless, booking trends among German land-based tour operators are running behind the comparable period from last year, and while AIDA is experiencing double-digit revenue growth, it's having to compete more heavily on price in 2019.

Additionally, there's uncertainty over Brexit, a recession in Italy, the "yellow vest" protests in France, and rate pressure from new land-based resort openings in Turkey and North Africa. All are challenging revenue and margins.

Management's response to sluggish conditions in Europe is typical of Carnival, in that the company is looking to upgrade its capacity in the region with new ships over the next several years. This should improve the European portfolio's return on invested capital by attracting new passengers and delivering fuel and other cost efficiencies. But at least in the immediate time frame, a weak European market is a primary factor behind the total organization's reduced full-year outlook.

[T]he reality is: Cuba is gone for the foreseeable future, and so it didn't add into plans for next year. And therefore, that higher-yielding itinerary is off the table. And companies like us and others will have to adapt to see what they can generate.

As was widely reported in the media, a sudden change in U.S. regulatory policy regarding travel to Cuba in early June caused immediate disruption among several cruise lines, including Carnival, that were in the middle of Cuba-bound itineraries. The U.S. government policy change catalyzed an impact of $0.04 to $0.06 on Carnival's full-year projected earnings per share.

Both the CEO and the CFO, David Bernstein, emphasized that the company isn't penciling in any revenue from Cuba as it looks ahead to next year. Bernstein noted that Carnival's competitors had built up short-cruise capacity to service Cuba; this dynamic introduces some uncertainty into the competitive picture, as it's unclear if this capacity will be put to use in other Caribbean destinations, or simply pulled back.

On a positive note, executives observed that the Caribbean region has been enjoying strong growth in bookings this year. So while the travel restrictions to Cuba will dampen incremental, high-margin revenue opportunities, at least some of the lost revenue will be replaced, given higher demand for other Caribbean destinations.

This point is consonant with management's larger message during the call. That is, while several separate conditions hit the company's full-year outlook, Carnival has weathered such storms in the past while still delivering tangible earnings growth. In management's view, none of the current headwinds is a long-term catalyst for revenue or margin compression.