Please ensure Javascript is enabled for purposes of website accessibility
Log In Help Join The Motley Fool
Free Article Join Over 1 Million Premium Members And Get More In-Depth Stock Guidance and Research
By Lee Samaha - Jun 24, 2019 at 8:17AM

Earlier this month, United Technologies (RTX 0.65%) revealed that after it finishes spinning off its two commercial businesses -- Carrier (heating, ventilation and air conditioning) and Otis (elevators) -- it will merge its remaining aerospace business (Pratt & Whitney and Collins Aerospace) with Raytheon (RTN).

Now the dust has begun to settle on that news, it's time to take a look at the consequences of the deal for the aviation industry. Indeed, one group of investors should be watching developments very closely, because the soon-to-be Raytheon Technologies could pose a real threat to the prospects for General Electric (GE -0.55%).

Why GE investors should be concerned

In a nutshell, the merger of United Technologies and Raytheon will create an aerospace giant with a cash flow profile that could enable Pratt & Whitney to invest heavily in developing engines using its geared turbofan technology. 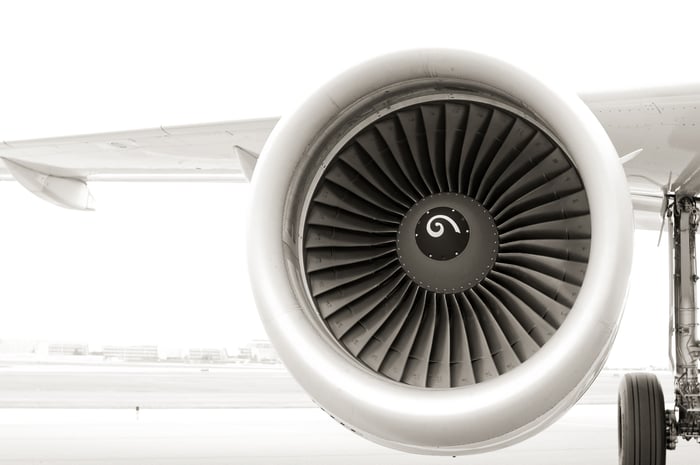 This could pose a threat a meaningful threat to GE Aviation's dominant position in aircraft engines. GE and its joint venture with Safran, CFM International, have a combined market share of engines in service of more than 50% in every major commercial aviation market in the world.

The increased threat to GE will materialize almost immediately. CFM International and Pratt & Whitney are believed to be competing for the contract to produce the engines for Boeing's (BA -1.98%) new midsize airplane (NMA) -- an project that Boeing is rumored to be looking to launch in 2020. It's going to be a winner-takes-all scenario, as during the recent UTC investor and analyst meeting, Pratt & Whitney President Bob Leduc said that his company's offer to Boeing was conditional on being the sole engine supplier on the NMA.

Moreover, with Pratt & Whitney's GTF already splitting the market with CFM's LEAP on the Airbus A320 NEO, there's also the possibility that a GTF could be developed for a future wide-body aircraft. Indeed, Pratt is understood to have had talks with Boeing already about supplying such an engine.

All in all, this merger will require investors to reconsider any assumptions they've previously made regarding GE's leading position in aircraft engines.

Developing aircraft engines costs money -- a lot of it. That's even more true when they use new technologies such as the GTF. Developing the GTF cost Pratt & Whitney some $10 billion, and aircraft unit sales tend to lose money particularly in the early years. It takes manufacturers time to cut their per unit costs of production. The real earnings and cash flow are generated by aftermarket revenue, as the engines get serviced and overhauled after usage.

As such, it will be a few years before the GTF starts to turn cash flow positive, and probably another decade before the GTF program reaches the breakeven point on an overall cash flow basis. Fortunately, there will be a lot more GTFs produced in the next few years: There are currently 470 airplanes with GTFs in service now, but Leduc expects this number to rise to 4,600 in 2025.

Clearly, if Pratt & Whitney intends to develop an engine for the NMA and potentially compete with CFM on wide-body aircraft too, it's probably going to need an infusion of cash. In the past, United Technologies relied on the steady streams of cash flow from Carrier and Otis to provide that liquidity, but those units will be hived off soon, and the GTF program still isn't cash flow positive.

The United Technologies-Raytheon deal will help

When outlining the rationale behind the merger, both sets of management highlighted the complementary nature of the combination, and how the two companies could benefit from each other's technology and R&D platforms.

Moreover, given that Raytheon is primarily a defense contractor, its earnings and cash flow should provide some stability in case of any slowdown in the commercial aerospace sector. This should enable Pratt & Whitney to be able to invest in new programs.

In addition, the combination of businesses will enable increased free cash flow (FCF) generation in the coming years. Management estimates a combined $6 billion in FCF in 2019 (about $3 billion from each company) will turn into $8 billion ($4.7 billion from United Technologies and $3.3 billion from Raytheon) in 2021. Given that $1 billion of gross run-rate cost synergies are expected by the fourth year following the merger, there's clearly potential for increased cash generation.

Pratt & Whitney's position as an engine supplier for the Airbus A320 NEO enables it to demonstrate the viability of its GTF technology, and opens up possibilities for the NMA and beyond -- perhaps extending to future wide-body aircraft. This presents a long-term competitive threat to General Electric's aviation segment, and given GE's struggles with cash flow in recent years, it might find it hard to respond to the challenge.

Aerospace investors' eyes will now turn to Boeing, as we wait to see if it launches the NMA project or not -- a decision that's been delayed by the 737 MAX issues -- and if it does, which engine it chooses.