Disney and Comcast opened this year's two most anticipated attractions in recent weeks. One nailed it, but the other got nailed.

The two companies behind the country's most popular theme parks -- accounting for all nine of the most visited theme parks in the U.S. and 15 of the 16 busiest destinations worldwide -- took different approaches to managing crowds. Comcast also tried to raise the bar in coaster experiences without extensive testing or the foresight to plan for the stormy summer season in Florida, and it's paying the price. 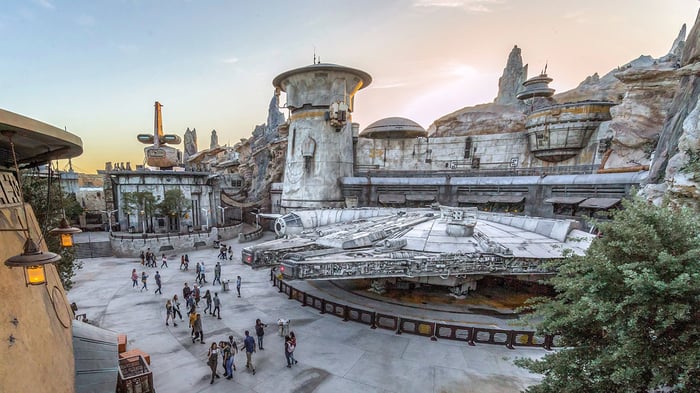 When Disney realized that just one of the two rides that would anchor Star Wars: Galaxy's Edge was going to be ready -- and ahead of schedule at that -- it surprised fans by announcing that it would open the area in two phases, making the ride where passengers can be pilots, gunners, and engineers on the iconic Millennium Falcon available weeks ahead of the busy summer season and months before the more ambitious Rise of the Resistance would debut.

Disney also decided to limit access to Star Wars: Galaxy's Edge to Disneyland hotel guests (ka-ching!) as well as folks who reserved four-hour reservation windows for the first three weeks and change of operation. The free online reservations were snapped up within a couple of hours, but the tight crowd control kept lines modest and experiences pleasant except for those on the outside looking in. Wait times for the new ride rarely extended more than an hour, but everyone wondered how things would play out come June 24, when all visiting park guests would have a crack at experiencing Star Wars: Galaxy's Edge.

Disney nailed that, too. Monday was surprisingly breezy for the new land's first day of operation for all park guests. Folks did have to make virtual "boarding group" reservations once they entered Disneyland, but just about everyone who wanted in eventually got to experience the expansion. Wait times for Millennium Falcon: Smugglers Run topped out at about 80 minutes early in the day, falling to a modest half hour during the final few hours of the operating day. In short, the Star Wars: Galaxy's Edge rollout has been a huge success.

Riding the storm out

Things have been completely different for Comcast in Florida. Folks waited in lines as long as 10 hours to experience the new Harry Potter-themed coaster when it debuted at Universal Orlando's Islands of Adventure on June 13, and the ride's reliability has only gotten worse. Lately some guests have waited five to six hours in line, only to walk away without getting on the coaster as rain and more frequent mechanical breakdowns bump up the attraction's downtime.

In a shocking move, Universal Orlando announced on social media last week that it wouldn't be opening Hagrid's Magical Creatures Motorbike Adventure until midday for the next several weeks as it works some of the bugs out. Really? The ride will always have limited capacity relative to the dueling coaster it replaced that was a people eater, and now it won't open until a couple of hours into the operating day? Choosing to open around noon -- just as the thunderstorms start to roll in this time of year -- also seems like a cruel prank on park guests. It's almost as if Comcast's park is deliberately limiting the hours of availability to keep wear and tear in check for a ride that clearly wasn't ready for prime time even under idyllic weather conditions.

A month ago it seemed as if Comcast would be the one raising the bar with a virtual queue system -- which it can't implement as long as downtime is the new normal. It also now has the advantage of a ride universally loved by the handful of guests who have been able to experience it. Millennium Falcon: Smugglers Run has generated mostly positive reviews, but it's being seen as more an evolutionary than a revolutionary step up in Disney imagineering.

Universal Orlando's woes are a sharp contrast to the smooth rollout for Disney, and that's welcome news for the House of Mouse, as it will introduce the same 14-acre Star Wars expansion to its larger Florida resort in two months. Disney World will pose some new logistical challenges given that it draws more than twice as many annual visitors as Disneyland and has far more on-site resorts, but Disney's already a step ahead of the madness. It will open the new area to folks staying at Disney World hotels three hours before the park's official opening for the first two months beyond the expansion's debut weekend, a move that will naturally increase full-priced bookings at its over two dozen properties during a historically sleepy part of the year. Disney is finding ways to extend the hours of operation for its new ride, just as its rival is going the other way. It's safe to say which of the two theme park giants will win the industry's guests -- and profits -- this summer.