Please ensure Javascript is enabled for purposes of website accessibility
Log In Help Join The Motley Fool
Free Article Join Over 1 Million Premium Members And Get More In-Depth Stock Guidance and Research
By Nicholas Rossolillo - Updated Jun 26, 2019 at 8:14AM

The concept is proven, but the current valuation is quite pricey.

West Coast discount supermarket Grocery Outlet (GO 0.79%) recently completed its initial public offering (IPO) and soared as much as 40% above its starting price. The closeout and overstock business model has been a successful one in the last decade as bargain shoppers continue to flock to the treasure-hunt-style experience, so it's no surprise that investors piled into the new stock as well. But Grocery Outlet has a lot to prove, and the current valuation is assuming quick runaway success. I'm not sure the rosy outlook is warranted quite yet.

A unique model for the world of groceries

The Grocery Outlet chain operates as a franchisor, with each store independently and locally owned and operated. Corporate takes care of purchasing, which allows its franchisees to sell goods typically 40% to 70% off a typical grocery retailer. The resulting shopping experience is a revolving door of mystery inventory, similar to what one would expect from TJX Companies' TJ Maxx or Ross Stores.

Sounds great. However, because Grocery Outlet is a franchisor, it needs to somehow pay its partners. Specifically, it shares 50% of gross profit on a per-location basis with store owners. These independent operators are responsible for staffing, local advertising, and other day-to-day operating expenses. But because each store is independently owned, there could be high variability in each location's actual performance -- a risk the company calls out in its prospectus.

The learning curve for new Grocery Outlet openings shows up in the numbers. From the beginning of 2015 to the end of 2018, the company grew its store count by an annual growth rate of 10.1%. Over that same period, comparable-store sales (a combination of foot traffic and average customer ticket size) increased 4.2% a year. All else being equal, that should equate to 14.3%-a-year revenue growth. However, total revenue and adjusted earnings before interest, taxes, depreciation, and amortization (EBITDA) was up an average of only 12% and 12.4% a year, respectively. That implies that, while well-established stores are doing well, new store openings underperform the average. With Grocery Outlet planning on expanding new locations at about a 10%-a-year rate going forward (based on an end-of-2018 store count of 316), there is a possibility that these plans drag down results in the short term. With the stock trading at 145 times trailing-12-month earnings, I'm not sure past performance warrants such a high valuation. 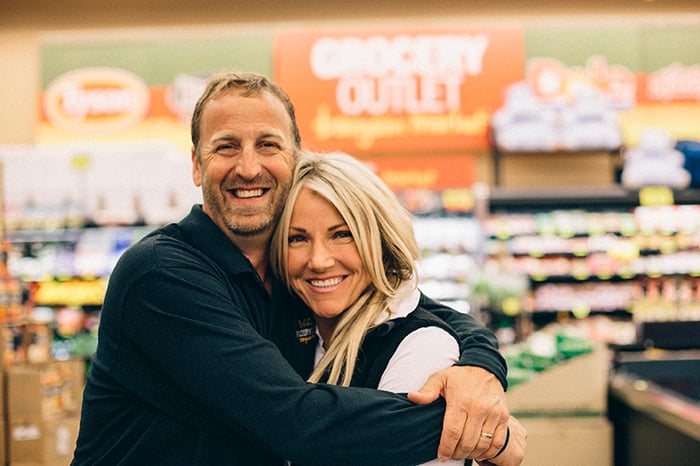 Appealing to bargain hunters can be a profitable model, but doing so in the grocery business is different than retail. Add to that the fact that Grocery Outlet is a franchisor and shares gross profit with its franchisees, and it all adds up to pretty slim margins. This is another reason to eye the stock's lofty premium with some skepticism.

Granted, shifting the bulk of operating expenses onto franchisees can mean Grocery Outlet investors get to enjoy the most profitable aspect of the business and leverage earnings in the years to come as new stores open up. However, even when "adjusting" net profits by backing out interest and tax expenses in the above chart, Grocery Outlet's margins are slim. Over the last 12 months, off-price retailers TJX Companies' and Ross Stores' profit margins of 7.7% and 10.5%, respectively, far surpass the grocery chain's performance.

Perhaps things will look sunnier when Grocery Outlet reports on its second quarter of 2019. After all, the company has said it is using the estimated $346 million in proceeds from its IPO to pay off a term loan. That should help reduce interest expense, which totaled $6.0 million in 2018 and $1.4 million in the first quarter of 2019.

However, even after using up its stock proceeds to reduce liabilities, this grocery chain still carries substantial debt. Listed at $873 million pre-IPO, Grocery Outlet says its total debt will be $513 million going forward. That is a hefty sum considering cash on the books totals just $19.4 million. Thus, interest expense will continue to weigh down the bottom line for some time.

One could argue that Grocery Outlet doesn't need cash to expand as the onus lies with prospective franchisees to pay up-front opening costs. However, the chain offers financing to help new store owners get up and running (which means more debt). Plus, the fact remains that this discount grocery chain is priced high for the modest expansion the company expects to pull off in the immediate future. After a hot IPO, investors should tread lightly.