Grocery Outlet is a fast-growing discount retail chain. The company is going public, and several signs point to a successful debut.

2019 has been a big year for initial public offerings. So far, most of this year's IPO crop have been unprofitable tech companies, and the resulting stock price performances have been a mixed bag.

Given this backdrop, it won't be hard for Grocery Outlet to stand out. This discount retailer is expected to price its IPO on June 20 and begin trading shortly thereafter under the ticker "GO." There is a lot to like about the company. It has a straightforward business model, it is growing quickly, and signs point to significantly more profitable growth ahead.

1. An interesting spin on the discount retail model

Discount retail has been one of the strongest consumer trends in recent years. Discount chains such as Dollar General, Costco, and TJ Maxx (just to name a few) have proven out over time that consumers will continue to patronize stores that deliver good value. This cohort has been rewarded with strong financial results and stock price performance. 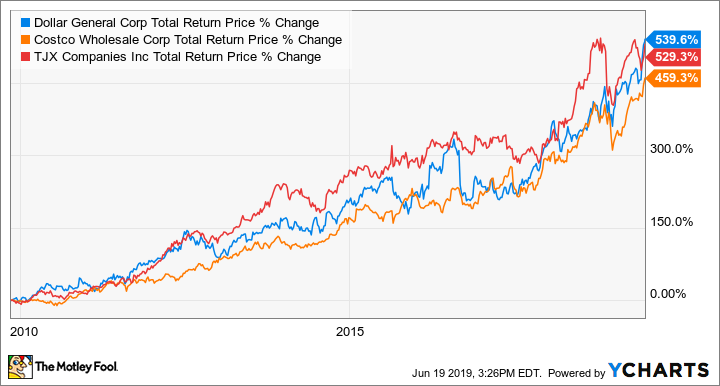 Grocery Outlet is set to continue capitalizing on the trends supporting the discount retail model, but it is also differentiated from other chains. The company is able to offer even deeper discounts because it buys inventory opportunistically in bulk. This also results in rapid inventory turnover, where new items show up in its stores at heavy discounts and are sold out as quickly as they appear. High inventory turnover is good for business (because products sell quicker), but also encourages customers to frequently stop by stores because they never know what they will find on sale.

The other twist is that stores are franchised to independent operators. While stores are still under the "Grocery Outlet" banner, each location is responsible for its own operations, which includes staffing, merchandising, and local marketing. The corporate office is focused on sourcing cheap products and managing the operators. In return, the company gets a 50% share of store-level gross profits. This system is effective at incentivizing store-level operators to maximize financial results, which in turn maximizes results for the overall company.

As a discount retailer, Grocery Outlet has a straightforward and defensible business model. The company's strategy of providing "extreme value" and franchising stores help differentiate the company in the eyes of the consumer and maximize operating efficiency.

One of the biggest reasons people look to participate in an IPO is to invest in growing companies. The good news here is that Grocery Outlet has shown robust growth over a long period of time.

Grocery Outlet is not actually a new company. It was founded in 1946 and has mostly been under the stewardship of its founding family. However, roughly 10 years ago, private equity firms took a majority ownership stake in the business and accelerated its growth. Since 2006, the company's store count has more than doubled from 128 to 323 and revenue has grown at an even faster rate.

In recent years, the company has continued growing at a nice clip. From 2015 to 2018, Grocery Outlet grew its store count on average by 10.1% per year and its total revenue on average by 12% per year. Revenue has grown faster than store count because revenue per store has increased.

Most remarkable is how consistent sales growth has been. The company has generated positive same-store sales comps for the last 15 consecutive years. This period includes the last economic recession and the slow recovery that followed.

Double-digit sales growth for a grocery store and healthy comp sales trends are nothing to sneeze at. The company expects its growth streak to continue, and based on its historical consistency, I wouldn't bet against that happening. 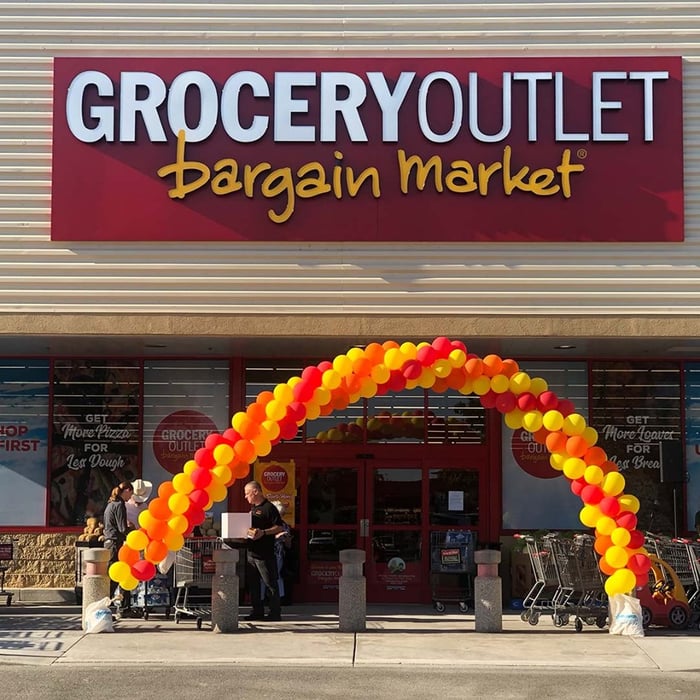 Perhaps the most exciting part of the Grocery Outlet story is its remaining growth potential. As of March 30, 2019, the company had 323 stores in six states in the Western United States and Pennsylvania. This is a tiny store footprint compared to nationally recognized chains.

The company estimates that it can add another 400 stores in the states it already operates in. The next phase of Grocery Outlet's expansion would be in neighboring states, and the company estimates it can build an additional 1,200 stores in those neighboring states. In the long run, Grocery Outlet believes it has the potential to open as many as 4,800 locations across the entire United States.

The map below shows where Grocery Outlet currently operates (red) and what it refers to as neighboring states (orange).

Grocery Outlet's growth estimates are aspirational but possible. The market for grocery stores is massive with several chains operating thousands of store locations and, in some cases, tens of thousands. However, to justify new stores, the company will need to compete and win market share from incumbents. This will be an uphill battle.

So far, the company has done a great job executing against its growth plan. In 2018, Grocery Outlet opened 26 new stores and expects to open 32 new stores in 2019. The current growth plan calls for expanding store count by 10% per year for the foreseeable future. Based on its current footprint, there is plenty of runway for this pace of growth to continue.

A defining characteristic of the current wave of IPOs is business unprofitability. That being said, Zoom Video has been one of the most successful IPOs this year. Much of its success had to do with the company's early signs of profitability. Grocery Outlet, too, is profitable. This is yet another factoid that will help the stock stand out in its early days of trading.

In 2018, Grocery Outlet generated net income of $15.9 million on sales of $2.2 billion -- implying a profit margin of just 0.7%. However, the company incurred $55.4 million of interest expense. The IPO funds are expected to eliminate a significant chunk of the company's debt load. This will be a tailwind to its profit margin and will most likely be viewed favorably by the public markets.

5. Insiders are not selling shares

Some recent IPOs have involved early investors and company executives cashing out their stock in transactions where the companies in question do not actually receive funds. This is not the case in the Grocery Outlet IPO.

The Grocery Outlet IPO is intended to raise funds in order to pay down the company's debt -- providing greater financial flexibility to pursue growth. If the IPO prices toward the high end of its range, the company could receive as much as $300 million that will be primarily used to retire some of its over $850 million in debt.

Insiders will not sell a single share in this transaction. This is most likely because the insiders continue to believe in the company's business strategy and growth prospects. If patient insiders believe the business will be worth much more in the future, why would they sell? Company outsiders should view this as a positive indicator.

Putting the pieces together, Grocery Outlet's IPO is poised for success. The company has a straight forward business model, a clear growth plan, and attractive financial characteristics. Finally, the fact that insiders are not selling shares is quite telling as to where they think the stock will go.