The food-and-beverage giant is a favorite among income investors. Does it deserve a place in your portfolio?

Few dividend stocks have been as reliable over their history as PepsiCo (PEP -0.50%), the maker of Frito-Lay snacks, Quaker Foods, and beverages including its namesake brands.

The company is a Dividend Aristocrat, having boosted its payouts annually for 46 straight years. Today, its dividend yield is 2.9%.

Over the last five years, Pepsi has outperformed both the S&P 500 and rival Coca-Cola on a total return basis, which includes dividends. 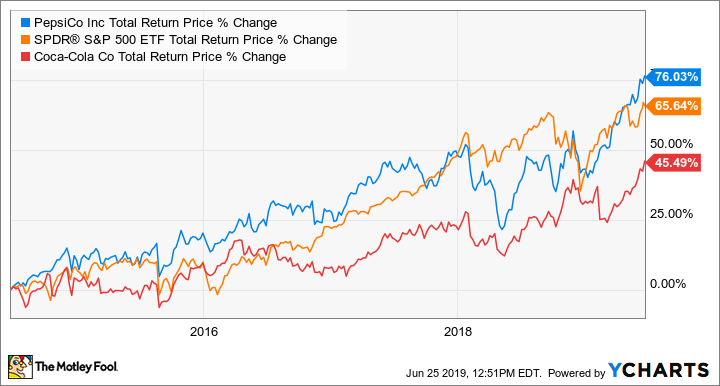 But is a PepsiCo stock a buy today? To answer that question, let's take a closer look at its business, how the stock stacks up as a dividend payer, and on value.

Though PepsiCo is most closely associated with soft drinks, the company is much more than that. Its business is divided into six segments: North America beverage (NAB), Frito-Lay North America (FLNA), Quaker Foods North America (QFNA), and three international segments that market all of the company's products in their regions.

The NAB division, which includes Pepsi and other well-known brands like Tropicana, Gatorade, and Mountain Dew, is its biggest segment by sales. It brought in $21.1 billion in revenue in 2018, though that was up just 1% from the year before. Like other soft drink makers, Pepsi has struggled as the consumer view of sugary drinks and diet sodas has grown increasingly negative. The division's operating profit, adjusted for restructuring costs, has fallen 21% to $2.4 billion from 2016 to 2018, due to declining volume sales of carbonated soft drinks and rising commodity costs, among other issues.

While falling profits from NAB are clearly a concern, the snacks division has picked up much of the slack. FLNA's organic revenue (which strips out the effects of acquisitions, divestitures, and foreign currency movements) increased 3% in each of the last two years, and operating profit grew 9% over the last two years to $5 billion. That operating profit rose due to productivity savings and price increases, as brands like Doritos, Lay's, and Fritos carry significant pricing power. 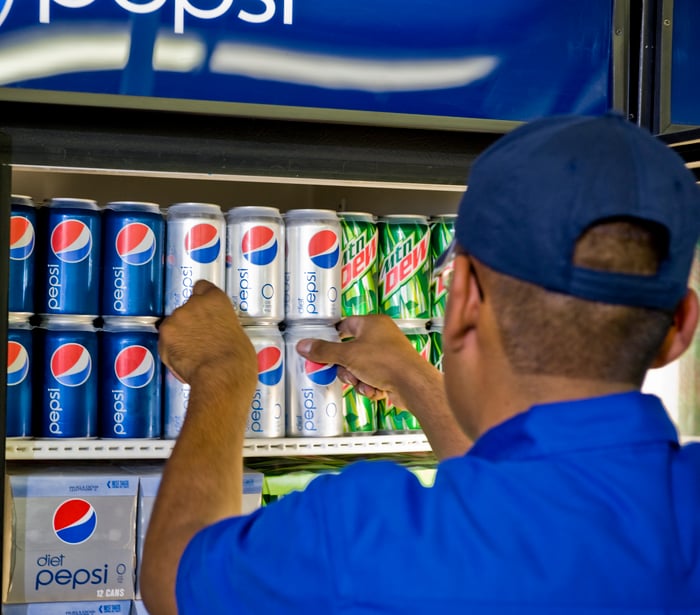 In international markets, the company's organic revenue grew by high single-digit percentages last year, reflecting the growth of the middle class in much of the world, as well as the strength of PepsiCo's brands, and its distribution and marketing muscle. QFNA, the company's smallest segment, continues to struggle in part due to a general decline in the popularity of ready-to-eat cereal.

After adjustments, Pepsi's net income has grown by 7% in each of the last two years, reaching $8.1 billion in 2018, and the company delivered strong results in its first quarter. Organic revenue rose 5.2%, and core constant-currency earnings per share increased 3%, driven by strong performances from Frito-Lay and the international divisions. Management is guiding for full-year organic revenue growth of 4%.

Given the company's status as a Dividend Aristocrat and its positioning as a defensive stock that's relatively resistant to recessions, many investors will consider buying shares of Pepsi stock at least in part because of its dividend.

Today, the company pays a dividend of $0.955 per quarter, which at current prices yields 2.9% -- a better yield than the S&P 500's average of 1.9%. Over the last five years, the company has raised its dividend by an average of 8% annually, though the hikes have ranged in size from just 3% earlier this year to 15% in 2018, which makes it harder to predict what its future dividend increases will look like. Based on the company's EPS of $5.66 over its last four quarters, its dividend payout ratio is moderate at 67.4%, meaning the company should be able to continue its modest dividend increases, provided that profits keep growing.

Pepsi today trades at a price-to-earnings ratio of 23.6, slightly higher than the S&P 500's average of 21.8. That premium may stem from Pepsi's brand strength, size, defensive position, and long history of profits and dividends. Management forecasts that its core constant-currency EPS will fall by 1% this year, in part due to the company lapping certain asset-sale and refranchising gains, and also because it is expected to have a higher tax rate. For 2020, the analyst consensus calls for adjusted EPS of $5.97, up 5.5% from $5.66 last year, giving the stock a forward P/E of 22.4, based on expected earnings.

The company is investing in productivity and cost-savings programs as well as marketing. Even in declining markets, its distribution networks and brands offer it a competitive advantage as it rolls out new products such as flavored sparkling water drinks to meet consumers' changing tastes. Pepsi's also well positioned to make new acquisitions when it sees growth opportunities it can capitalize on, such as its $3.2 billion buyout of SodaStream last year.

PepsiCo will never be a big growth stock, but for dividend investors, it looks like a solid buy. It offers a reliable, slowly growing dividend, growth opportunities in snacks and international markets, and a recession-resistant base of well-known consumer staples brands.

Even at a slightly higher valuation than the market, PepsiCo should delivery steady returns.

Is Pepsi an Excellent Defensive Dividend Stock to Buy in 2023?
413%