Please ensure Javascript is enabled for purposes of website accessibility
Free Article Join Over 1 Million Premium Members And Get More In-Depth Stock Guidance and Research
By Lou Whiteman - Jun 26, 2019 at 11:18AM

Pet food performed well in the recent quarter, but other businesses continue to struggle.

Shares of General Mills ( GIS 2.33% ) traded down 8% on Wednesday morning after the consumer staples company reported quarterly sales that came in below estimates. The company's recent acquisition was a bright spot, but its legacy businesses continue to underperform.

General Mills on Wednesday morning reported fiscal fourth-quarter adjusted earnings of $0.83 per share, topping consensus estimates of $0.77 per share. But investors were more focused on revenue that, at $4.16 billion, came in below the $4.24 billion expectation. 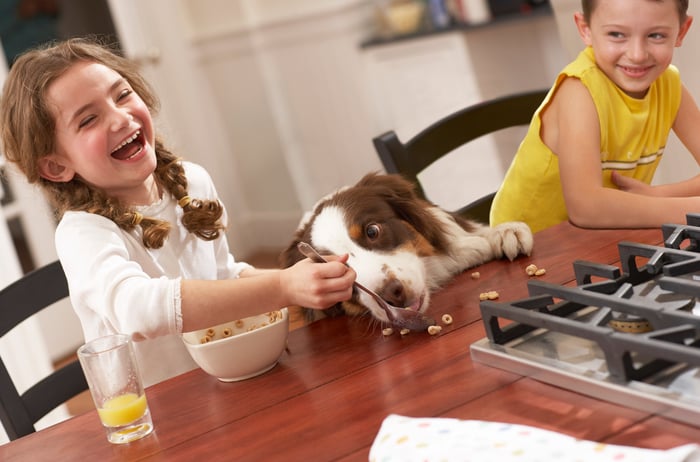 Retail sales in North America, which include yogurts, cereal, and snack products, were down 2% in the quarter, while the company's Europe and Australia division reported net sales that were down 10%. General Mills said results were hurt by difficult comparisons to last year, as well as slowing ice cream demand and ongoing challenges in France and throughout Europe.

The one bright spot was the company's pet segment, fueled by its 2018 purchase of the Blue Buffalo pet food franchise. On a pro forma basis, pet sales climbed 38% in the quarter to $406 million, the result of moving Blue Buffalo products through General Mills' massive distribution network. For the full year, pet sales were $1.43 billion, up 11% pro forma.

Although the growth in the pet segment is encouraging, pet revenue accounted for less than 10% of General Mills' $16.87 billion in total annual sales. The company needs to see improvements in its other divisions to really generate growth.

General Mills is forecasting organic sales growth of 1% to 2% in the new fiscal year, driven by expected improvements in its Haagen-Dazs and Old El Paso Mexican-food franchises as well as growth in yogurt and in emerging markets. The company is also continuing to ramp up its pet business, earlier this month opening a new 400,000-square-foot production plant to support Blue Buffalo.

That's better than declining sales, but not a lot for investors to get excited about. Blue Buffalo is delivering, but General Mills still has a lot of work to do restoring its other businesses to health.