The man who designed your iPhone is heading for the exit door, while your bank stocks are about to put a few more coins in your pocket.

Who says the middle of the week is boring for stocks? That's definitely not the case in post-market trading this evening -- some big news items came down the pole that are affecting related companies on the exchange.

The Federal Reserve published the results of its annual capital allocation review after market close, plus a big personnel move was announced at Apple (AAPL -1.31%). Nike (NKE -0.51%), meanwhile, reported the last set of results from its fiscal 2019. 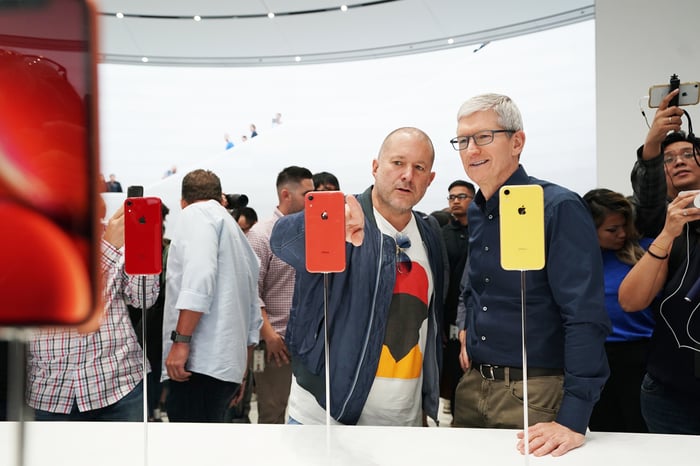 The man who designed Apple's most iconic products will no longer be employed by the company. Apple announced that Jony Ive, its chief designer and the person most directly responsible for the sleek and distinctive look of signature offerings such as the iPhone, will leave the company later this year at an unspecified date.

Apple said Ive will found an independent design company called LoveFrom. Apple is to be a client of that company, although the details of this relationship have not been revealed.

Ive has been an Apple employee since 1992, rising through the ranks to his current position. He first came to prominence among the public with his team's design for the iMac computer, a hit product in the 1990s for the resurgent company.

It says something about Apple that it has elevated its top design executive to C-level, an unusual move in most types of corporations. Although Ive's departure is unexpected, it shouldn't affect Apple much if it utilizes Ive's new company as planned.

Apple's stock is down following the news about Ive, but only marginally.

The Fed has published the results of the second part of its two-part 2019 Comprehensive Capital Analysis and Review (CCAR) set of stress tests. In this phase of the CCAR, the capital allocation plans of such companies are analyzed, and essentially either approved or rejected. This year the Fed approved all but one of the 18 plans under review.

The one disapproval was for the proposal of Switzerland-based lender Credit Suisse. In the CCAR, the Fed said in order for it to flip that decision to approval, it "is requiring the firm to address weaknesses in its capital adequacy process by October 27, 2019."

The other capital allocation plans were approved. This is particularly happy news for income investors, as the banks under review were generally aiming to raise their dividends. Bank of America (BAC 0.92%), for example, is now permitted to hike its quarterly common stock dividend by 20% to $0.18 per share. On top of that, Bank of America now has the Fed's OK for a one-year, $30.9 billion stock buyback program.

Banks are generally trotting with the bulls in after-market trading on the back of this news. Bank of America stock is up by 2%. As for the other "big four" U.S. banks, JPMorgan Chase and Citigroup are also in positive territory more or less at that level, and Wells Fargo is adding around 1%.

After-hours traders seem mildly disappointed in Nike's Q4, as they're pushing the share price down tonight, but only slightly.

Nike's revenue growth came from sales increases in nearly every region and category save for Asia Pacific/Latin America, which saw a 4% decline. The company specifically mentioned higher selling and administrative costs as a factor in the overall net profit drop.

On average, analysts were collectively modeling $10.16 billion on the top line for Nike's Q4, and $0.66 in per-share profit. That earnings-per-share miss was Nike's first in 27 quarters.

Still, the company is well in the black and taking advantage of growth opportunities such as the ever-hungry Chinese consumer market. Nike is also managing to hold its own amid intensifying competition, which is perhaps why post-market investors aren't selling off the stock too heavily.