Please ensure Javascript is enabled for purposes of website accessibility
Free Article Join Over 1 Million Premium Members And Get More In-Depth Stock Guidance and Research
By Rick Munarriz - Jun 27, 2019 at 9:00AM

The first guests are checking into the newest hotel at Comcast's ( CMCSA 1.10% ) Universal Orlando resort this morning. There's a lot riding on the first phase of Universal's Endless Summer Resort. The Surfside Inn and Suites tower opening today will add 2,000 rooms and two-bedroom suites, doubling in size when the adjacent Dockside Inn and Suites tower opens in the springtime of 2020.

It took two decades for Comcast to build up its on-site lodging options from zero to six hotels offering 6,200 rooms. This resort -- while technically just outside of the current resort -- will push availability north of 10,000 by next year. It's not the only reason why today's new resort is a game changer for Comcast as it tries to close what is now a widening gap with larger nemesis Disney ( DIS 2.84% ). 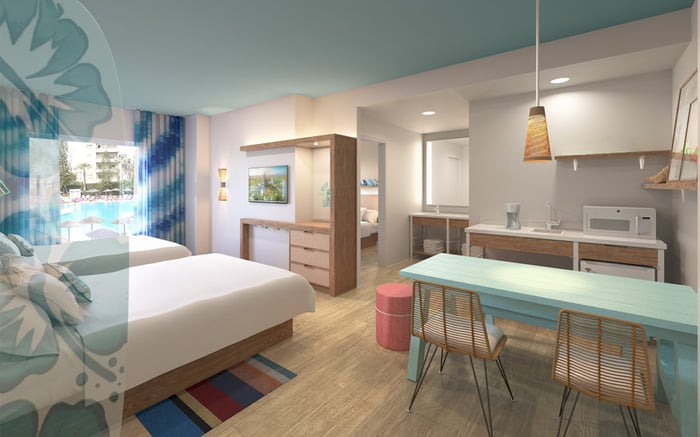 There are more than 36,000 rooms available at Disney World's on-site resorts, and the vast majority of them are owned and operated by Disney. Universal Orlando has a lot of ground to make up, but its empire went from a sixth of Disney's rooms yesterday to what will be more than a fourth by March of next year.

Comcast's new hotel is about more than just the thousands of families that it can keep close to its theme parks, drumming up incremental turnstile clicks. Universal's Endless Summer resort is located farther out than the six existing hotels, so Comcast is taking a more aggressive approach to pricing. The rooms start at $85 a night during slow season, more competitive with the nearby third-party chains as the rest of the Universal Orlando resorts have triple-digit overnight rates.

The timing of the new hotel couldn't be better. It's been two weeks since Universal Orlando introduced Hagrid's Magical Creatures Motorbike Adventure, a ballyhooed story coaster that's been a downtime disaster between mechanical breakdowns and weather delays. Comcast is also coming off a quarter in which its theme park revenue posted a rare year-over-year decline. The new hotel is naturally opening too late to juice up the second quarter, but it will be available for the entire third quarter.

Theme parks aren't a big part of Comcast's business right now. The segment accounted for just 6% of last year's revenue mix and 8% of its adjusted EBITDA. However, given the hazy long-term sustainability of its flagship cable television service business, there should be a lot more on the shoulders of Comcast's other segments. It also only helps that the Universal Studios theme parks are great outlets to promote Comcast's catalog of Universal, NBC, and DreamWorks Animation content.

It also only helps that Universal Orlando is widely expected to announce plans for a major theme park expansion on the large tracts of nearby land that it has been acquiring. The new area -- roughly the size of its current resort -- is actually closer to Universal's Endless Summer Resort than the on-site hotels. Theme parks will be a bigger part of the picture at Comcast, and today it has 32% more rooms to offer overnight guests at Universal Orlando than it did on Wednesday.