Jump on these deals while they last.

With the stock market close to its all-time high, value investing doesn't get much love these days. But that doesn't mean there aren't value stocks ripe for the picking. Three of our Motley Fool contributors see value in Kinder Morgan (KMI -0.92%), Kontoor Brands (KTB 0.16%), and Renewable Energy Group (REGI). 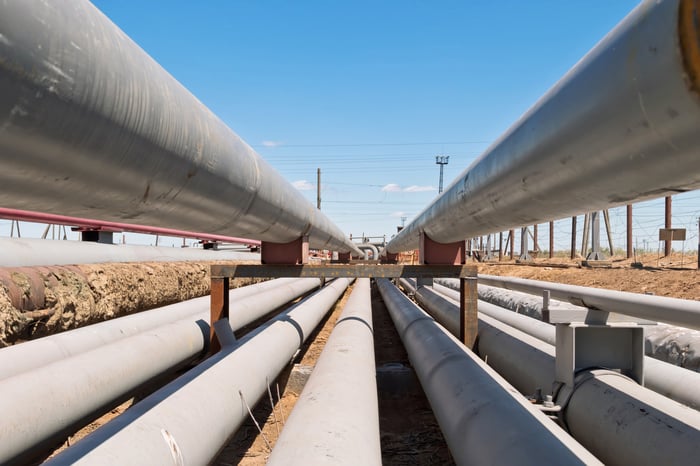 But the company has worked just as hard to reverse that decline by investing in high-return growth projects. Those expansions are beginning to pay dividends as they've helped restart its growth engine. For 2019, the company expects to haul in more than $5 billion, or $2.20 per share, of cash flow, which would be about 7% above last year's level.

That uptick in earnings has helped fuel a small rebound in Kinder Morgan's stock price this year, though shares are still absurdly cheap given the amount of cash it's on track to produce. With the stock recently around $20.50, it implies that the company sells for slightly more than nine times cash flow. That's well below the peer group average, which is closer to 12 times cash flow these days.

For whatever reason, the market isn't yet giving Kinder Morgan full credit for all the moves it made to improve its financial profile and restart its growth engine. However, the market should eventually correct this oversight, which is why the stock looks like an excellent buy for value investors.

Tim Green (Kontoor Brands): Spun off from VF Corporation in May, denim-focused Kontoor Brands is having a rough time as a publicly traded company. The stock has crashed from around $40 per share to $26. While the fear of tariffs on imports from Mexico drove some of the decline, this level of pessimism doesn't seem warranted.

These brands aren't trendy, but they are popular. The company expects to produce low single-digit annual revenue growth over the next two years, roughly in line with the growth of the overall market. I'll admit that it's hard to get excited about a company with such a low ceiling for growth. But the valuation makes up for it.

At $26 per share, Kontoor is valued at just about $1.5 billion. Analysts are expecting non-GAAP (adjusted) earnings per share of $3.44 on average in fiscal 2019, although I would take that estimate with a grain of salt given how new the company is. Still, a forward P/E of less than 8 is certainly enticing.

The dividend is another reason to be interested in this stock. Kontoor hasn't officially declared its first quarterly dividend payment yet, but it did reiterate its intentions to pay shareholders $2.24 in dividends annually. That works out to a yield of roughly 8.5%.

Kontoor's beaten-down stock price may be related to VF shareholders selling off the stock after the spinoff. Regardless of the reason for the depressed valuation, Kontoor looks like a solid value stock.

A value play for long-term investors

Maxx Chatsko (Renewable Energy Group): Shares have been nearly halved since their late-2018 peak, and sport an above-average risk profile. But investors with a long-term mindset might find an intriguing opportunity in Renewable Energy Group right now. The nation's largest biodiesel producer is trading at just 0.87 times book value, which means the stock would have to rise 15% to be fairly valued. That's not the only source of intrigue.

Renewable Energy Group has finally outgrown its dependence on a federal subsidy called the blenders tax credit (BTC), which has been allowed by Congress to expire in 2010, 2014, 2015, 2017, 2018, and 2019. But that doesn't mean it wouldn't help the company's financial position. While the subsidy has been retroactively reinstated every year through 2017, biodiesel producers have had no such luck for output from last year or this year -- yet. If the BTC is put back on the books, then the business would receive an estimated $237 million check from Uncle Sam for 2018 production alone.

The windfall isn't needed, but it sure would help. Consider that Renewable Energy Group is currently exploring ways to expand its production capacity of renewable diesel (different from biodiesel), which is chemically identical to petroleum-based diesel and more valuable. That includes expansion of an existing facility beyond its current annual capacity of 112 million gallons and a new joint venture being explored with Phillips 66 that would start with a West Coast facility that would have a capacity of 250 million gallons per year.

The biodiesel leader currently doesn't have the cash to make big investments in renewable diesel, which makes the reinstatement of the BTC absolutely crucial to enabling the next wave of growth without massive dilution or soaring debt balances. That said, while there are multiple bipartisan funding bills on the table and a history of retroactive legislation, Renewable Energy Group will still face pricing headwinds throughout 2019. Investors willing to take on the extra risk for the value play could be handsomely rewarded, but the payoff could take years.