The pharmacy giant continues to face major headwinds. But it managed to perform better than expected in Q3.

The last time Walgreens Boots Alliance (WBA 0.86%) announced its quarterly results, the pharmacy giant's revenue increased 4.6% compared to the prior-year period. It was a different story with adjusted earnings, though, which saw a year-over-year decline of 5.4%.

Walgreens announced its third-quarter results before the market opened on Thursday. The company's earnings fell yet again, but there was some good news. Here are the highlights from Walgreens' Q3 update. 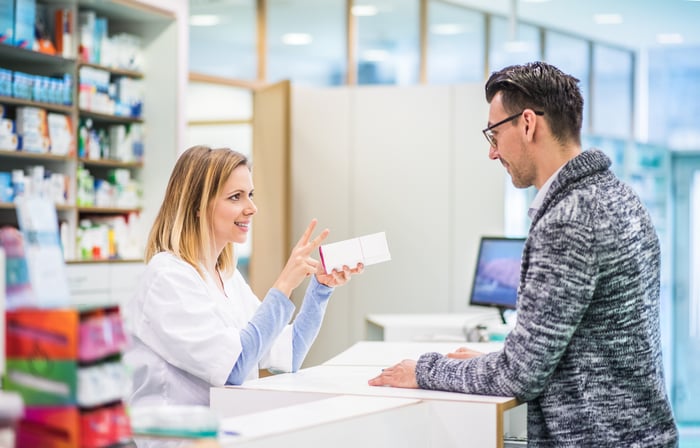 Walgreens announced Q3 revenue of $34.6 billion, a 0.7% increase from the $34.3 billion reported in the year-ago period. The company's reported revenue was also slightly higher than analysts' average revenue estimate of $34.46 billion.

The pharmacy giant's net income reported under generally accepted accounting principles (GAAP) was $1.03 billion, or $1.13 per share, in the third quarter. This reflected a 16.5% decrease from the prior-year quarter.

Walgreens' non-GAAP (adjusted) net income came in at $1.47 per diluted share, a 4% year-over-year decline. However, the company beat analysts' consensus adjusted earnings estimate of $1.43 per share.

The weak revenue growth in the third quarter was hurt to some extent by currency fluctuations. Walgreens reported that its sales increased 2.9% from the prior-year period on a constant currency basis. This growth stemmed primarily from improvement in its U.S. retail pharmacy and pharmaceutical wholesale divisions. However, the company's international retail pharmacy division struggled with a poor performance from its Boots UK business.

Walgreens' operating expenses in Q3 matched the level from the prior-year quarter. With revenue increasing slightly and spending staying the same, why did the company's earnings decline? The main culprit was a lower gross margin resulting from a higher cost of sales in Q3.

Despite the mixed results, Walgreens Boots Alliance management expressed optimism. CEO Stefano Pessina stated, "Following a difficult second quarter, we made progress in the third quarter against the strategic goals we set, and are pleased to report an improvement in our U.S. comparable growth compared with the first half of the year."

Walgreens maintained its guidance for fiscal 2019. The company still expects no significant earnings growth for the full year 2019 at constant currency rates. It also anticipates an adverse impact from currency fluctuations of $0.06 per share.

Pessina said that Walgreens Boots Alliance "will continue our aggressive response to rapidly shifting trends." The company is implementing what it calls a "transformational" cost-cutting program to help reduce expenses.

The big problem for Walgreens, though, is that cost reductions don't generate growth. They only help boost the bottom line temporarily. It's those "rapidly shifting trends" in the pharmacy industry Pessina mentioned that Walgreens really must deal with effectively for the company to return to solid growth.