These three biotech stocks should be outstanding long-term growth vehicles.

Over the prior decade, you'd be hard-pressed to find a better performing subsector than biotechnology. A number of biotech stocks, after all, have produced life-changing returns on capital over this period. Nonetheless, the industry's best days are far from over. With a wave of groundbreaking products in the pipeline, biotechnology is poised to keep churning higher for the foreseeable future.

With this favorable long-term outlook in mind, we asked three of our Motley Fool contributors for their top biotech stock picks. They selected Biogen (BIIB -2.05%), AbbVie (ABBV -0.36%), and Mirati Therapeutics (MRTX -5.94%). Here's a brief rundown on why each of these biotech stocks might be worth adding to your portfolio soon. 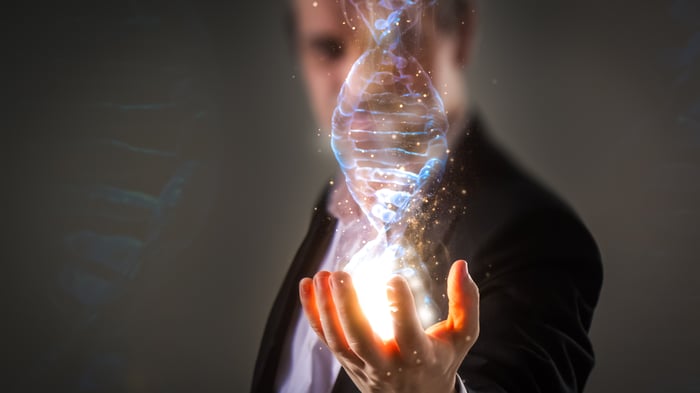 A rebound is imminent

George Budwell (Biogen): Biogen, a top 10 biotech by market capitalization, has been a rather disappointing investing vehicle for going on five years at this point. The biotech's shares, in fact, have lost an eye-popping 46% from their five-year highs achieved back in 2015.

Despite this dreadful performance over the past five years, though, Wall Street still isn't convinced that this beaten-down biotech stock is a bargain at current levels. Biogen, after all, is experiencing a steady decline in its core multiple sclerosis franchise; its spinal muscular atrophy revenue stream is under threat following the FDA approval of Novartis' novel gene therapy; and its high-value Alzheimer's disease drug, aducanumab, failed to make the grade earlier this year in either of its late-stage trials.

Compounding matters, management has been reluctant to address the company's falling top line via a tuck-in acquisition. However, Biogen's brain trust may no longer have any choice in the matter. The company's top line is slated to fall by around 1% next year, and this downward trend could start to accelerate in a big way beginning in 2021 -- that is, if the biotech doesn't take action soon.

Fortunately, Biogen does have around $20 billion to spend on M&A (through a mixture of cash on hand, new debt, and incoming free cash flows). So, with a clear need for new sources of top-line growth and ample financial capacity for M&A, Biogen appears destined to pull the trigger on one or more bolt-on acquisitions before year's end -- a move that should finally change the narrative around its underperforming stock.

A big beaten-down biotech with plenty to offer

Keith Speights (AbbVie): Biotech stocks, in general, have performed pretty well so far in 2019. Not AbbVie. The big biotech is down year to date as investors worry about what's in store for the company now that sales for its top-selling drug, Humira, are beginning to slip. Many don't like AbbVie's planned acquisition of Allergan. I think, though, that this big beaten-down biotech stock has plenty to offer.

For one thing, AbbVie is dirt cheap right now. The stock trades at only seven times expected earnings. That low valuation would be warranted if AbbVie didn't have very good growth prospects. But that's not the case.

AbbVie recently won FDA approval for Skyrizi in treating psoriasis. The company should pick up another approval within the next few months for upadacitinib. The rheumatoid arthritis drug proved better than Humira in clinical studies. Market researcher EvaluatePharma thinks that it will be the No. 2 biggest new drug launch of 2019.

Meanwhile, AbbVie's cancer drugs Imbruvica and Venclexta continue to pick up momentum. The biotech thinks that Orilissa will become a blockbuster in managing endometriosis pain (an indication for which it's already won approval) and in treating uterine fibroids.

Don't forget AbbVie's juicy dividend, either. Its dividend currently yields north of 6.5%. And AbbVie has a terrific track record of hiking its dividend.

I'm skeptical about AbbVie's deal to buy Allergan. However, the company thinks that the acquisition will boost earnings by 10% within the first full year after the transaction closes and by more than 20% after then. We'll see, but the acquisition doesn't change my overall view about AbbVie.

Todd Campbell (Mirati Therapeutics): Mutations to a gene contributing to cell growth and maturation called KRAS have been a focus of cancer research for 30 years, but until recently, KRAS mutations that can cause cancer cell growth and spreading have been considered "undruggable" because the gene lacked a specific target that a treatment could latch onto.

Last month, Amgen (AMGN -1.56%) reported clinical trial results for AMG-510, the first KRAS-mutation targeting medicine, that suggests researchers may have finally overcome this roadblock. If so, then Mirati Therapeutics shares could be worth buying ahead of the release of data from its own KRAS-targeting therapy, MRTX849, in Q4 2019.

There's no telling if Mirati's data will be similarly encouraging, but if it is, then it could be needle moving. Late-stage solid tumor cancer patients have limited treatment options and historically poor survival rates. The specific KRAS mutation targeted by Amgen and Mirati -- KRASG12C -- is found in roughly 13% of NSCLC and up to 5% of colorectal cancers. Across all solid tumor cancers, Mirati estimates the G12C addressable population to be as large as 24,500 in the U.S. alone.

Since Mirati is a clinical-stage, pure-play biotech and Amgen is a biopharma behemoth, a win for Mirati's drug will likely reward investors more -- especially if the data attracts the attention of a suitor looking to bolster its cancer R&D pipeline.

Should You Buy Biogen Stock After Its Latest Alzheimer's Disease Drug Approval?
415%